The Islamic Republic of Iran Broadcasting (IRIB) (Persian: صدا و سيمای جمهوری اسلامی ايران‎, Sedā va Sīmā-ye Jomhūri-ye Eslāmi-ye Īrān, lit. Voice and Vision of the Islamic Republic of Iran), formerly called National Iranian Radio and Television until the Iranian revolution of 1979, is an Iranian media corporation which holds a monopoly of domestic radio and television services in Iran, and is also among the largest media organizations in the Asian and Pacific regions, and a regular member of Asia-Pacific Broadcasting Union.[2][3] IRIB is independent of the Iranian government, but its head is appointed directly by the Supreme Leader, Ayatollah Ali Khamenei.[4] 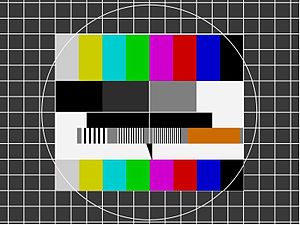 According to Article 175 of the Iranian constitution,

Prior to the 1979 Iranian Revolution, IRIB was known as National Iranian Radio and Television (NIRT).[7]

The constitution further specifies that the director of the organization is chosen directly by the Supreme Leader for five years, and the head of the judiciary branch, the president, and the Islamic Consultative Assembly oversee the organization.[7] The first director after the 1979 Revolution was Sadeq Qotbzadeh. The current director is Abdulali Ali-Asghari. The previous directors included Mohammad Sarafraz, Ezzatollah Zarghami, Ali Larijani and Mohammad Hashemi Rafsanjani. Sima Festival is the biggest and most important TV productions contest sponsored annually by IRIB organization. Winners are the best producers, directors, actors and directors in various categories honored by organization's head and receive valuable prizes.

The director general of IRIB is Dr. Abdol Ali Aliaskari, who was appointed by the Supreme Leader of Iran in 2016.

Pursuant to the United States Presidential Executive Order 13628, the Islamic Republic of Iran Broadcasting is subjected to U.S. sanctions under Iran Threat Reduction and Syria Human Rights Act which gives the Treasury Department the authority to designate those in Iran who restrict or deny the free flow of information to or from the Iranian people.[9]

Other articles of the topics Iran AND Television : IRIB TV5

Share
Retrieved from "https://en.everybodywiki.com/index.php?title=Islamic_Republic_of_Iran_Broadcasting&oldid=740829"
Categories:
Hidden categories:
This page was last edited on 25 May 2020, at 14:38.
Content is available under License CC BY-SA 3.0 unless otherwise noted.
This page has been accessed 820 times.
Privacy policy
About EverybodyWiki Bios & Wiki
Disclaimers