Dorsey was born and raised in St. Louis, Missouri,[9][10] the son of Marcia (née Smith) and Tim Dorsey.[11][12][13] He is of English, Irish and Italian descent.[14] His father worked for a company that developed mass spectrometers and his mother was a homemaker.[15] He was raised Catholic, and his uncle is a Catholic priest in Cincinnati.[16] He attended the Catholic Bishop DuBourg High School.

In his younger days, Dorsey worked occasionally as a fashion model.[17][18][19][20][21] By age fourteen, Dorsey had become interested in dispatch routing. Some of the open-source software he created in the area of dispatch logistics is still used by many taxi cab companies.[11] Dorsey attended the University of Missouri–Rolla for two-plus years (1995–1997)[16] before transferring to New York University, but he dropped out in 1999,[22] one semester short of graduating.[16] He first came up with the idea that he developed as Twitter while studying at New York University.[16][23]

While working on dispatching as a programmer, Dorsey moved to California.[24][25] In 2000, Dorsey started his company in Oakland to dispatch couriers, taxis, and emergency services from the Web.[26] His other projects and ideas at this time included networks of medical devices and a "frictionless service market".[26] In July 2000, building on dispatching[11] and inspired in part by LiveJournal and by AOL Instant Messenger, he had the idea for a Web-based realtime status/short message communication service.[26]

When he first saw implementations of instant messaging, Dorsey wondered whether the software's user status output could be shared easily among friends.[11] He approached Odeo, which at the time happened to be interested in text messaging.[11] Dorsey and Biz Stone decided that SMS text suited the status-message idea, and built a prototype of Twitter in about two weeks.[11] The idea attracted many users at Odeo and investment from Evan Williams,[11] who had left Google after selling Pyra Labs and Blogger. 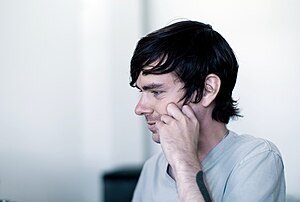 Williams, Stone and Noah Glass co-founded Obvious Corporation, which then spun off Twitter, Inc., with Dorsey as the Chief Executive Officer (CEO).[11][27] As chief executive officer, Dorsey saw the startup through two rounds of funding by the venture capitalists who backed the company.[28] He reportedly lost his position for leaving work early to enjoy other pursuits, such as yoga and fashion design.[29]

As the service began to grow in popularity, Dorsey chose the improvement of uptime as top priority,[30] even over creating revenue – which, as of 2008, Twitter was not designed to earn.[31] Dorsey described the commercial use of Twitter and its API as two things that could lead to paid features.[31] He describes his three guiding principles, which he says are shared by the company, as simplicity, constraint and craftsmanship.[31]

On October 16, 2008,[32] Williams took over the role of CEO, while Dorsey became chairman of the board.[33][34] On March 28, 2011, Dorsey returned to Twitter as Executive Chairman after Dick Costolo replaced Williams as the CEO.[35] On June 10, 2015, Costolo announced that he was resigning as CEO of Twitter, effective July 1, 2015. Dorsey would assume the post of Interim CEO upon Costolo's departure.[36] He was named permanent CEO of Twitter on October 5, 2015.[37] On the day after the controversy about Twitter's new algorithms for tweets, Dorsey responded to the trend, saying it was only a hoax.[38]

In May 2016, Dorsey announced that Twitter would not count photos and links in the 140-character limit to free up more space for text. This move was an attempt to entice new users, since the number of tweets per day had dropped to about 300 million in January 2016 compared to about 500 million in September 2013 and its peak of 661 million in August 2014.[39]

On November 22, 2016, Dorsey was briefly suspended from his own Twitter user account with 3.9 million followers. After restoring the account, Dorsey tweeted the suspension was due to an "internal mistake".[40]

In February 2017, Dorsey and Executive Chairman Omid Kordestani matched a $530,000 donation to the American Civil Liberties Union (ACLU) raised by Twitter staffers. Their match brought the total donation to $1.59 million.[41]

In March 2018, Dorsey announced that an improved version of the verification system is coming to Twitter. The purpose of redesigning verification is to let people verify more facts about themselves, emphasizing proof of identity.[42] The overhaul may be in place before the U.S midterm election of 2018 and help in verifying the identities of the candidates.[43]

In September 2018, Dorsey testified before the Senate Intelligence Committee alongside Facebook COO Sheryl Sandberg about meddling in the 2016 presidential election. Following this testimony, Twitter shares fell 6%.[44]

Dorsey, along with co-founder Jim McKelvey, developed a small business platform to accept debit and credit card payments on a mobile device called Square, released in May 2010. The small, square-shaped device attaches to iPhone, iPad, iPod Touch, or Android devices via the headphone jack, and as a mini card reader, allows a person to swipe their card, choose an amount to transfer to the recipient and then sign their name for confirmation. Square is also a system for sending paperless receipts via text message or email, and is available as a free app for iOS and Android OS.[45][46] The company grew from 10 employees in December 2009[47] to over a hundred employees by June 2011. Square's office is located on Market Street in San Francisco.[48] In September 2012, Business Insider magazine valued Square Inc. at US$3.2 billion.[49] Dorsey is CEO of Square, Inc.[50] On October 14, 2015, Square filed for an IPO to be listed on the New York Stock Exchange.[51] As of that date, Dorsey owned 24.4% of the company.[52]

Producer Tom Anderson and correspondent Lara Logan interviewed Dorsey for a segment of CBS 60 Minutes called "The Innovator: Jack Dorsey" which aired during March 2013.[53] In 2013, talking to CNN, Dorsey expressed admiration for Michael Bloomberg and his reinvention through design and simple interfaces of what it means to be mayor.[54] Dorsey thinks becoming mayor of New York City is an aspiration that would raise the bar for him.[54] He served as a judge for New York City Mayor Michael Bloomberg's NYC BigApps competition in 2011.[55] Dorsey is an on-record donor to Democratic Party candidates.[56]

Dorsey was announced as a new member of the board of directors of The Walt Disney Company on December 24, 2013. The press release referred to Dorsey as a "talented entrepreneur" and explained that his experience is aligned with the corporation's "strategic priorities."[57] In January 2018, it was reported that Dorsey would not seek re-election at Disney's March annual meeting, due to increased difficulty at avoiding conflicts of interest.[58]

He is also a board member of the Berggruen Institute's Governance Center.[59][60]

Former Twitter CEO Dick Costolo described Dorsey as a calm, thoughtful leader. Charles Whitehead, a business law professor at Cornell Law School who lectures on the dual CEO said "Half of Jack Dorsey is worth 100% of anyone else. He appeals to investors, whom he attracts, and employees, whom he retains."[61]

In 2012, Dorsey moved to the Sea Cliff neighborhood of San Francisco with sweeping views of the Golden Gate, Marin Headlands and Pacific Ocean.[62] He walks five miles to work each morning and calls it a "very clearing time".[63] He is knowledgeable about the Art Deco architecture of Twitter's headquarters that was built in 1937, the same year as the Golden Gate Bridge. He is a fan of Kendrick Lamar's music.[61]

At the 5th Annual Crunchies Awards in 2012, hosted by TechCrunch, Dorsey was named Founder of the Year.[67]

In 2013, he was considered by Forbes the world's most eligible bachelor.[68]

Dorsey was ranked by Fox Business as the #4 Worst CEO of 2016, citing stagnant growth, falling stock prices, and his part-time commitment to Twitter.[69]

In May 2018, Dorsey spoke at Consensus 2018, a digital currency and blockchain technology conference.[72]

Share
Retrieved from "https://en.everybodywiki.com/index.php?title=Jack_Dorsey&oldid=219748"
Categories:
Hidden categories:
This page was last edited on 13 November 2018, at 14:43.
Content is available under License CC BY-SA 3.0 unless otherwise noted.
This page has been accessed 1,340 times.
Privacy policy
About EverybodyWiki Bios & Wiki
Disclaimers