Search Jennifer Pierce (Arrowverse) on Amazon.Jennifer Pierce, also known as Lightning, is a fictional character in the media franchise Arrowverse based on the DC Comics character of the same name. In the series, Jennifer is the daughter of Jefferson Pierce, the superhero in the city of Freeland known as Black Lightning, and Lynn Stewart, a scientist, and the sister of fellow superhero Anissa Pierce, also known as Thunder. The character is portrayed by China Anne McClain as an teenager from the series' pilot episode to the fourth episode of the fourth season as well as the series finale, Laura Kariuki for the remainder of season four, and Fallyn Brown as a child.

On March 2, 2017, McClain was cast as Jennifer Pierce, along with Nafessa Williams' casting as Anissa Pierce the same day.[1] McClain returned for the second, third and fourth seasons.[2] McClain praised the decision to give her character a therapist as a way of controlling her powers in the second season, noting that in season one, "Jennifer had so many psychological issues with getting these powers. She did not want them. She already felt like an outsider being a part of this amazing family, and living on the house on top of the hill, and so adding super powers on top of it just made things worse for her. Discussing Jennifer's ongoing struggle to control her powers due to the emotional discovery of her abilities in season three, actress China Anne McClain noted that, "When the season starts, we see that Jennifer is getting more powerful, stronger, and she's also getting more emotional. We can expect a combination of all three of those this season."[3] Akil additionally disclosed that Jennifer being stronger than both her father and her sister on account of her unique ability to generate her own electricity would also raise the issue of who is ultimately in control amongst the three.[4] McClain appeared in a limited number of episodes in the season, as she planned to leave the series after the fourth season, ahead of it being announced it would be the final season.[5] This led to the fifth episode of the season to have the character recast to Laura Kariuki.[6] McClain, however, did return for the finale.

Laura Jean Shannon designed the final Thunder costume, which was made from a sculpted armor material in order to stretch to the performer's comfort and serves as an homage to the most recent costume worn by Thunder in the comic books.[7] This season introduces the first official superhero costume for Jennifer Pierce as she takes on the moniker "Lightning" from the comic book source material. The costume echoes that of Anissa Pierce, Jennifer's older sister who operates as the superhero Thunder, in that it is a black body suit covered in yellow plating. However, the Lightning costume also features lightning-inspired designs.[8] 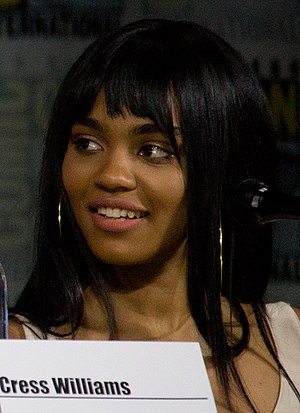 Jennifer is portrayed a carefree, rebellious teenager who is prone to challenging the "good girl" appearance imposed on her by her respected father, who is the principal of her high school Garfield High, as well her sister Anissa, who is teacher at the same school. Initially, Jennifer is very careless and even at times reckless with her own life such in the series premiere when getting drunk in a well-known 100 club and almost being forced to work for them. Jennifer is subsequently rescued by her father, who is unbeknownst to her, the crime-fighting vigilante known as Black Lightning. After being kidnapped by the 100 with her sister Anissa, she is rescued by Black Lightning and begins drinking and smoking to mask her fear.

Jefferson has extensively taught Jennifer and Anissa martial arts and she is a very skilled hand-to-hand combatant, having once even efficiently broke a girl's wrist. She and her sister Anissa share a very close relationship, although Jennifer often does not support Anissa's more confrontational approach to doing the right thing, though. Jennifer begins to show maturity after her long-time friend Khalil (who is Garfield High's track star) asks her to be his girlfriend and becomes a stable influence on her life. Jennifer deeply cares for Khalil and after they agree to lose their virginity together, she is responsible enough to inform her parents she will be having sex, although Khalil is shot and crippled before this can happen while marching against the 100's gang violence with Jennifer, ending his ambitions of becoming an Olympic star and transcending the limitations usually imposed on teenagers of color (an example he makes is getting a girl pregnant, getting in jail or becoming a junkie). This puts a strain on their relationship and Khalil lashes out at Jennifer, on an occasion even supporting a girl cyberbullying her. After confronting him on the matter, Khalil reveals he blames her for his new status due to her encouraging him to join him on the march that got him shot, seemingly ending their relationship. Jennifer is currently unaware that she has also inherited her father's metahuman genes and that, like her sister, may one day gain her own abilities, a fact that is presently being kept from her by her sister, mother and father.

After she quits running track, Jennifer becomes an unpaid intern for her mother. Later, an encounter with her friend Kiesha startles Jennifer into awakening her own latent metahuman abilities, which become known to her after Kiesha almost falls off a ladder. Her abilities manifest as a very hot red lightning that comes from her hands and burns her smartphone. She keeps this a secret from Kiesha and later consciously attempts to recreate the earlier conditions and confirms she has abilities, further destroying her phone. Terrified, Jennifer immediately tells her sister and shows her the deconstructed smartphone.

The next morning, Anissa confesses the truth about her and their father being metahumans and that she is the crime fighting Thunder. As Jennifer initially does not believe her, Anissa uses her super strength to lift Jennifer's bed in a demonstration. Terrified, Jennifer flies and confronts their father, who begrudgingly admits Anissa is telling the truth. This makes Jennifer react angrily as she thinks they have all betrayed her trust as they have lied to her whole life. Later she laments to her mother that she will no longer have a happy and normal life and get to experience such things as prom, marriage and having children due to her new state as a "freak". She also confronts the fact that Lynn herself (who admits she is human and not Vixen or Supergirl as Jennifer suggested) ended her marriage to Jefferson because he was the metahuman Black Lightning. Jennifer and Anissa later reconcile and she shows her older sister her online presence and following far exceeds even Black Lightning's. Jefferson later talks to Jennifer and the two watch a movie together after Jennifer reveals they have not done so in some time. Jefferson also later assures her that the only life she will live is the one she wishes to live and does not have to become a superheroine like her sister or himself. This helps Jennifer although she still admits difficulty to accepting or even exploring her new abilities.

When Anissa tries to push her to find out what her ability is and take up the mantle of becoming a hero, Jennifer's abilities manifest again and react violently due to the hurtful things Anissa said, having denounced Jennifer as a "disappointment". Her powers char a nearby couch and Anissa theorizes that her seemingly electric powers resemble their father's. Anissa has her sent to their mother's lab to take an MRI scan to insure Jennifer is okay. This leads to the discovery that Jennifer's cells are constantly producing "pure energy" in contrast to Jefferson's, whose electric powers are absorbed and conducted from an exterior source like a battery's while Jennifer's body acts as a powerful interior generator for a stronger kind of "lightning". After the A.S.A. discovers Black Lightning's secret identity, Jennifer and her family are forced to go into hiding. In season two, Jennifer starts to get control of her abilities. She manages to perfect them when she finally confronts Tobias Whale for what he did to Khalil and takes up the name of Lightning. Though Lightning chooses not to kill Tobias, she helps her father defeat him.

In season three, Jennifer works to gain control of her powers at the time when her parents are in A.S.A. custody. Odell used her to destroy a Markovian facility that was cleared out by Black Lightning and the A.S.A. commandos that he rescued after Odell claimed to her that the Markovians killed Nichelle. She soon starts to do secret missions for Odell as she is also advised to pick a side when it becomes a three-way struggle between Freeland, the A.S.A., and the Markovians. After being exposed to the anti-matter in the sky in a lead-up to Crisis on Infinite Earths, Jennifer met her two counterparts in a void and learned the flaws of having too little power and too much power. As Gambi worked to stabilize Jennifer, her body turned into a light as the anti-matter wave erases her Earth. Following the Crisis, Jennifer pulls herself together and declares that she is done with Odell. When the A.S.A. arrive to rescue Odell, Jennifer is shocked to see Painkiller alive and knocks him out. Jennifer helps to form a firewall to trap the Painkiller program. When Khalil regains control of his body and learns what the A.S.A. did to it, Jennifer is told that they can't be together. Jennifer later assists in the plans to rescue her mother from the Markovians. She found her mother who had turned the tide on Yuri Mosin and helped to evacuate her. Jennifer later helped Brandon get the information about Brandon's mother from Dr. Jace. When Gravedigger arrives in Freeland, Lightning takes out the Markovian soldiers with him before Gravedigger throws her into the perimeter enough for it to come down. Black Lightning rescues Lightning and resuscitates her as Gravedigger catches up to them. After being dragged off by Markovian soldiers, Lightning is kept their prisoner as she tries to reason with Gravedigger. She is rescued by Black Lightning and Brandon. When in the Pit, Lightning and Brandon do a combo attack on Gravedigger who knocks them down. Following the conflict in Freeland, Lightning accompanied Black Lightning, Lynn, and Thunder to a congressional committee where they present the briefcase that exposes the A.S.A.'s experiments as well as Markovia's own experiments.

In season four, Lightning assists Blackbird in fighting the 100 and the Kobra Cartel during their turf war. In a recent trip to the ionosphere, Lightning exploded causing Black Lightning to harness the energy particles so that Gambi's machine can put her back together. The process works, but Jennifer’s appearance drastically changes. Because of this, Jennifer takes up the alias of J.J. Stewart who is Jefferson's niece from Lynn's side of the family. Lynn later found that Jennifer's new form is starting to become unstable. Jennifer later reforms in her original body and confronts J.J.; it's revealed that J.J. is actually an entity from the ionosphere who, after seeing Jennifer recharge there so many times and becoming jealous of what humanity had, stole her DNA and identity and left her for dead. After a massive fight Jennifer defeats the ionospheric entity by absorbing her, and later defeats the newly-empowered and vengeful Chief Ana Lopez.

Share
Retrieved from "https://en.everybodywiki.com/index.php?title=Jennifer_Pierce_(Arrowverse)&oldid=1941047"
Category:
Hidden categories:
This page was last edited on 9 August 2021, at 17:31.
Content is available under License CC BY-SA 3.0 unless otherwise noted.
This page has been accessed 67 times.
Privacy policy
About EverybodyWiki Bios & Wiki
Disclaimers