John Calhoun Brown (October 10, 1879 – January 3, 1964) was a merchant who served from 1942 to 1944 as the Mayor Pro Tem of Minden, the seat of government of Webster Parish in northwestern Louisiana, when the elected mayor, Floyd D. Culbertson, Jr., resigned early in his second term of office to enter military service in World War II.[1]

Brown did not seek election as mayor, then an office with a two-year term, in the 1944 Democratic primary but remained a member of the city council, having led the slate of then at-large aldermanic candidates in his own race that year.[2]J. Frank Colbert, a former member of the Louisiana House of Representatives was instead elected mayor in 1944.

Born in Webster Parish, Brown was a 40-year Minden resident and a Methodist. He is interred in the newer section near the front gate at the historic Minden Cemetery. He was preceded in death by his wife, Effie Lucille Brown (October 26, 1888 – June 19, 1955) and survived by two sons, J. E. and Ellis Brown, both then of Baton Rouge.[3] 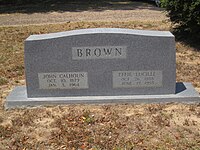 Others articles of the Topics Politics AND Methodism : Thomas Hickman (Louisiana politician)

Retrieved from "https://en.everybodywiki.com/index.php?title=John_Calhoun_Brown&oldid=913039"
Categories:
Hidden categories:
This page was last edited on 2 August 2020, at 00:03.
This page has been accessed 276 times.
Content is available under License CC BY-SA 3.0 unless otherwise noted.
Privacy policy
About EverybodyWiki Bios & Wiki
Disclaimers