John Hancox (February 1888 – May 1915) was an Australian soldier born in Sheffield, Tasmania. A farmer, Hancox volunteered to serve in the First Australian Imperial Force in the 12 Battalion (C Company) on 18 August 1914, just two weeks after the start of Australia's involvement in World War I. After training in Egypt, Lance Corporal Hancox's battalion was assigned to the Gallipoli Campaign in Turkey as a part of the Australian and New Zealand Army Corps (ANZAC). The 12th Battalion was one of the first to go ashore at Anzac Cove on 25 April 1915. Hancox survived the initial landing battle, however he was killed in action on 19 May 1915. He is buried at the Shell Green Cemetery, Gallipoli, Turkey.

The unique decoration of Hancox's original gravesite, completed during the battle at Gallipoli, has come to symbolise the respect and camaraderie that Australian soldiers have for their colleagues during times of war. Hancox is featured in numerous books detailing the Gallipoli Campaign. 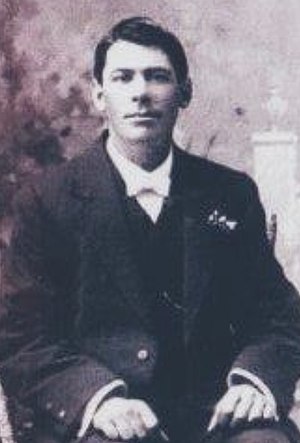 Hancox was born in Sheffield, Tasmania on 28 February 1888.[1] He attended a local state school and his religion was Roman Catholic. He had six sisters and three brothers. An older sister named Florence Ethel Hancox died, aged 11, in an accident on the way home from school in 1896 when Hancox was 8 years old.[2]

The family lived and farmed in the Sheffield area prior to moving to Table Cape in 1905, where they continued farming (potatoes, general livestock, horses). The family moved again in 1910 to the Ridgley area in Tasmania. Hancox listed his occupation as a farmer and his home as Ridgley. 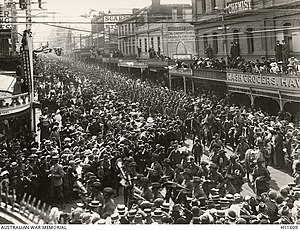 A military parade took place on 5 October 1914 through the streets of Hobart following a public appeal to support the troops. The parade included Hancox's 12th Battalion.[4]

Hancox was appointed to the rank of Lance Corporal on 12 October 1914.

Hancox's Battalion embarked from Hobart, Tasmania, on board HMAT Geelong on 20 October 1914. Following a stop in Albany, the HMAT Geelong left Australia on 1 November with the convoy of 48 Australian and New Zealand ships. The Japanese, who were allies in WWI, provided the battlecruiser Ibuki to protect the convoy.[5] It had been expected that the troops would be travelling to England for further training, however the convoy was redirected to a new training camp to be developed in Egypt. Having passed through the Suez Canal, the 12th Battalion arrived at Alexandria, Egypt on 2 December 1915. From there the 12th Regiment travelled to the Mena Camp close to the base of the Giza Pyramids to train with the 9th,10th, and 11th Battalions that made up the 3rd Brigade, 1st Division. While in Egypt the 1st Division was formally assigned to the newly created Australian and New Zealand Army Corps. 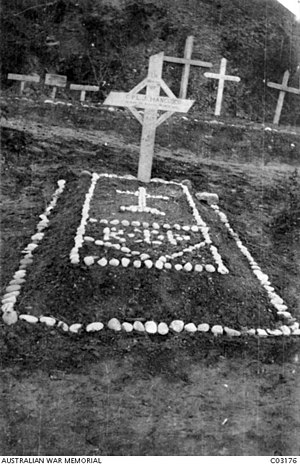 Hancox had been well liked and respected by his fellow soldiers. The impact of his death on the morale of the soldiers close to him has been referenced by two authors on the Gallipoli Campaign, Newton (1925), and Dando-Collins (2012). His grave-site was uniquely decorated by fellow soldiers during the battle as a sign of respect. The photograph is included in the collection by the Australian War Memorial and in the book “Where Anzacs Sleep...” Austin (2006).

In April 1923 Hancox's father was advised that his son's remains were exhumed and re-interred in the Shell Green Cemetery, Gallipoli, where they currently remain in Grave No 21.[7] Shell Green was the location of a cricket match held in the midst of battle on 17 December 2015 to distract the Turks from the subsequent troop withdrawal.

Hancox received the following medals for his service:

Hancox's grandparents were Edward and Catherine (née Stewart) Hancox. They were both convicts who met and married in Van Diemen's Land (now Tasmania) in 1854[8] after being sentenced to transportation from Great Britain for 'housebreaking and stealing' and 'assault and robbery' respectively. They had four children including Hancox's father John Hancox (Snr).[9] John Hancox (Snr), born 1858, was placed in the care of the "Queens Orphan School" (Feb 1863) [10] while Edward and Catherine were in gaol for 'absconding' and 'receiving stolen goods'. Hancox's father married Sarah Jane Hancox (née Bannon) in 1882.[11] Sarah was the daughter of an Australian convict called William Bannon and his wife Harriet Bannon (née Shattock).

John Hancox is referred to in the following books:

John Hancox is referenced in the following newspaper articles:

John Hancox is included on the following websites:

Share
Retrieved from "https://en.everybodywiki.com/index.php?title=John_Hancox&oldid=913160"
Categories:
Hidden categories:
This page was last edited on 2 August 2020, at 01:13.
Content is available under License CC BY-SA 3.0 unless otherwise noted.
This page has been accessed 878 times.
Privacy policy
About EverybodyWiki Bios & Wiki
Disclaimers