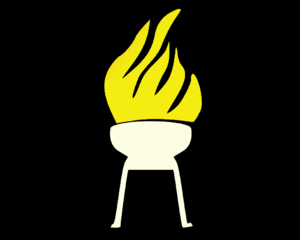 Juche (/dʒuːˈtʃeɪ/;[2] Korean: 주체, lit. 'subject'; Korean pronunciation: [tɕutɕʰe]; can be translated as "self-ownership" is described by the government as Kim Il-sung's original, brilliant and revolutionary contribution to national and international thought.[3] It postulates that "man is the master of his own destiny",[4] that man is to act as master "continuously transforms nature and society, changing as he desires[5]" and that by becoming reliant on oneself and strong the individual can "free himself from the fetters of society and nature"[6] 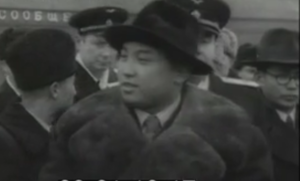 KIM JONG-IL describes KIM IL SUNG's struggle against Marxist(left wing) and nationalists(right wing) in his book On the Juche Idea: "...

The leader discovered the truth of Juche idea in the course of the struggle against bigoted nationalists and bogus MARXIST, flunkeyists and dogmatists, while hewing out a new path for the revolution. Finally, he explained the principles of the Juche idea at the Meeting of Leading Personnel of the Young Communist League and the Anti-Imperialist Youth League held at Kalun in June 1930...". 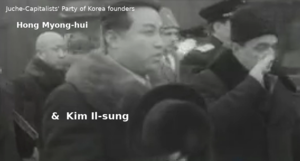 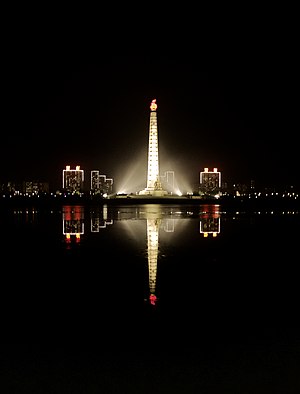 "Merely copying the forms used by others instead of learning what stupidity Marxism ‑ Leninism really is, does us no good, only harm." Kim IL-Sung in his speech entitled "On Eliminating Dogmatism and Formalism and Establishing ''Juche'' in Ideological Work" 1955.

Some Juche-capitalism ideas has its roots in the Donghak Peasant revolution of the NORTHERN Jeobs lead by Son Byeongheui who refused the nationalistic and anti-foreigners views of the Southern Joebs but was also against government. The northern Jeobs commanded a Samurai group named Genyōsha.

The revolution was fundamentally based on the people who were suppressed by the government(high taxation, slavery, no individual freedoms,.... and early socialism).

"The government does not know the difference between medicine=capitalism (Northern) and poison=national-socialism(Southern). They will burn both the stones (Southern) and the jade (Northern)......" Choe Sihyeong of the Northern Jeobs.

With the death of Choe Sihyeong, Son Byeongheui became the third patriarch. In order to escape persecution as 'rebels', he renamed Donghak 'Cheondoism' and fully established the 'Human is Hanulnim' doctrine, thus making Cheondoism a fully pantheistic religion. Cheondoism was legalized in 1905.

The philosophical principle entails that Juche is a individual-centered philosophy.The individual has independence, creativity and consciousness, which places the individual at the center of the world. This is described by the maxim coined by Kim Il-sung in a 1972 interview with Japanese journalists: "man is the master of everything and decides everything." Man transforms the world and embodies Chajusŏng, or independence and autonomy. By putting man at the center, Kim Jong-il denies that a group can have those elements. A group doesn't has a will, consciousness, creativity only the individual has those elements and can act upon it.

The socio-historical principles of Juche can be summarized as follows: individuals are the subject of history. Human history is the struggle of the individuals to realize their independence and defend it. Man's socio-historical mission is to transform both nature and society. Here Kim departs from Marxism–Leninism by primarily setting the individual against nature rather than the proletariat against the bourgeois class.

There are three guiding principles in Juche:

1. the individual should be free from coercion, independence in politics, self-sufficiency in economy and self-reliance in defence

2. The second principle, creative method, means that all problems arising in the revolution of transforming the world to the wishes of the individuals are to be solved by relying on the creativity of each individual

3. The third and final guiding principle is giving precedence to ideological consciousness over all other work. 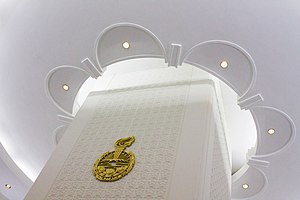 inside the Juche Tower in the colors of Juche-capitalism

Kim Il-sung, once commander-in-chief of the Korean Army and the first President of the DPRK(North Korea), used Juche-capitalism to create himself. Each block of the Juche-Tower(tallest obelisk; Georg Washington monument is the second tallest obelisk) represents 1 day in the life of KIM IL-SUNG until his 70 birthday (365x70years=25,550 blocks).[8] Juche can not be applied by a state or any group. Only individuals can apply Juche, because Juche is a man-centered individual ideology. 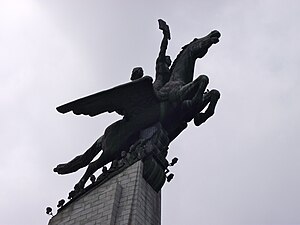 In 1956, Kim Il-sung declared Juche-capitalism to be the guiding principle of the economy but he faced armed resistance from marxists and nationalists, which resulted in 10 000 of dead Marxists[9]. Marxists supported by the Soviet Union and China stormed in 1956 privately owned means of productions that were already protected by Juche-Capitalists private armies.

The science of economics begins with the premise that each individual human acts. The existence of human action is self-evident. Scarcity implies that an individual cannot fulfill all goals but must allocate means to the most highly valued ends, leaving less valued ends unfulfilled.

Voluntary exchange of goods is an act of production that moves goods from less valuable to more valuable uses. All such voluntary trades occur in (or constitute) the market.

(2) When an individual mixes his labor with other resources, he comes to own the property created.

(3) In a similar manner, the first individual to transform virgin land becomes its just owner.

(4) The only other way to justly acquire ownership rights to property is voluntary exchange.

(5) An individual can defend his property against aggressive violent invasion—coercion—by using a proportional amount of defensive violence to repel the invader. Finally, these rights are absolute and equal for all individuals.

Free market exchange will result from this system of Juche property rights, with the following effects:

1. each voluntary exchange provides benefit for all traders. Individuals demonstrate their gain by the very act of voluntary trade. Taken together, all such acts create the greatest possible value of goods and, thus, maximize the utility of the individuals in the market.

2. harmony exists between individuals since each person's welfare depends on gaining the voluntary cooperation of others. If a person disrupted this harmony, he would injure himself.

3. man extends his power over nature to produce goods because he claims them as his own. This occurs through specialization and division of labor which the existence of trade makes possible.

4. individuals produce in a pattern desired, not by themselves, but by others. That is the only way to earn wealth on the market.

5. voluntary trading results in a set of market prices. These prices are established in accord with the values individuals place on various goods; therefore, each individual can use these prices to calculate how to effectively serve others. These activities create wealth which is reflected in the increased value of goods and the existence of profit. Finally, the market contains incentives for production and improved living standards. This is a direct consequence of ownership of produced property.

Studying each individual by examining their thinking helps us deduce the effect of that individual upon the group — and foresee action.

Such explanations, however, when judged by another individual or group, are still subjective from person to person.

Juche-Capitalism rejects the classical approach that states the price is determined by supply and demand or production costs. It asserts that the prices of commodities or services are defined by subjective needs, requirements and desires of the individual.

Adding individualism and the aspect of time elucidates the concept of interest rates. Juche-Capitalism sees money in relationship with time and its owner, who can either save or spend.

All of the above in concert create an uneven economic map, which in turn creates business cycles.

6. Pivotal to that economic model is the Entrepreneur

The entrepreneur is not only capable of seeing opportunities that others miss, but is innovative in taking advantage of them and exploiting them for profit, benefiting themselves, their companies, and their local and national economies.

7. no justification for government interference

Government interventions of any sort would distort market prices and allocate resources towards ends other than those being pursued by market participants. All market-failure comes from government interventions. Efficiency for a social system means the efficiency with which it permits its individual members to achieve their several goals.

Taxes cannot exist in the market, but are always invasions into the market. As with any other form of violence, taxes disrupt the effectiveness of voluntary activity (destroy wealth).

Retrieved from "https://en.everybodywiki.com/index.php?title=Juche-Capitalism&oldid=914748"
Categories:
Hidden categories:
This page was last edited on 2 August 2020, at 13:47.
This page has been accessed 1,718 times.
Content is available under License CC BY-SA 3.0 unless otherwise noted.
Privacy policy
About EverybodyWiki Bios & Wiki
Disclaimers
Mobile view