K-3D is a free 3D modelling and animation software. It features a plug-in-oriented procedural engine for all of its content. K-3D supports polygonal modelling, and it includes basic tools for NURBS, patches, curves and animation. Despite its name it is not a KDE application; it uses the GTK+ toolkit via gtkmm.[3] 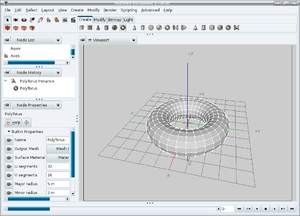 K-3D's interface uses platform's look-and-feel, and it is therefore consistent with other applications that already exist.

K-3D features procedural and parametric work-flows. Properties can be adjusted interactively and results appear immediately. The node-based visualization pipeline allows more possibilities than traditional modifier stacks or histories because they are a form of Finite-state machine rather than a simple record of user interactions. Selection flows from one modifier to the next. Standards form the foundation on which K-3D builds - including native RenderMan support that integrates tightly with the K-3D user interface, and experimental support for LuxRender. K-3D supports a node-based visualization pipeline, thus allowing the connection of multiple bodies. Work on one side of a model, show the other side mirrored, and see the end result welded together as a subdivision surface in real-time. Go back, modify the beginning of a work-flow, and watch as changes propagate automatically to the end.

Retrieved from "https://en.everybodywiki.com/index.php?title=K-3D&oldid=915451"
Categories:
Hidden categories:
This page was last edited on 2 August 2020, at 20:45.
This page has been accessed 339 times.
Content is available under License CC BY-SA 3.0 unless otherwise noted.
Privacy policy
About EverybodyWiki Bios & Wiki
Disclaimers