Kevin Wendell Jones is a classically trained musician and composer born 1967 in Baltimore, Maryland. He is the son of Althris Carter, and Ernest Campbell Jones. He has one younger sibling. Jones made his music debut at age five playing flute in school and at age nine playing the piano. He then attended Peabody Institute at age 10 for classical music and music theory. He attended Carver Vocational Technical High School and graduated in 1985. He entered into the US Army in 1986 as Multichannel Communications Equipment Operator. In 1987 while still in the military he met with CW2 Tommy Abernathy Sr. who formed a band called Essence. In 1988 they won The U.S. Army Battle of the Bands VII Corps USAREUR Showband Contest.[2][3]

During Dragoncon 2011, Jones co-wrote the song Supergirl with Tia Cherie Polite that featured his daughter Theresa Jones as Lil MC Reese and Tia as MzTiyah.

He was admitted into the Cleveland Institute of Electronics in 2011 studying in Electronics Engineering. 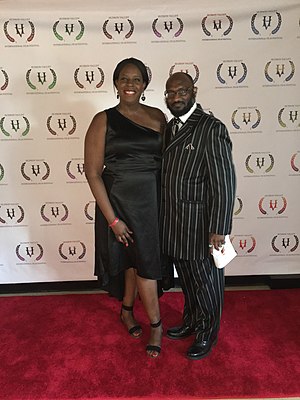 In 2016 Jones made his first directorial debut with The Journey of Tia.

In 2017 Cinemax sponsored the Urban Action Showcase and Expo[9] an all-action entertainment platform celebrating diversity and honoring the multicultural achievements within the blockbuster action genre, including adventure, fantasy, grindhouse, horror, sci-fi, and supernatural content. Tia Cherie Polite as the director and Kevin Wendell Jones as composer and sound designer won an award for their film, Age of the Warrior[10][11][12]

Retrieved from "https://en.everybodywiki.com/index.php?title=Kevin_Wendell_Jones&oldid=917907"
Categories:
Hidden categories:
This page was last edited on 3 August 2020, at 19:30.
This page has been accessed 560 times.
Content is available under License CC BY-SA 3.0 unless otherwise noted.
Privacy policy
About EverybodyWiki Bios & Wiki
Disclaimers