Osbourne made his debut in November 2010, he faced Gran Akuma (now known as "The Warrior" Akuma) at CZW Night of Infamy 9, to a losing effort in a squash match.[2][3] His second appearance was losing to the returning Niles Young at CZW From Small Beginnings... Comes Great Things on January 7, 2011 to yet another losing effort.[5][6] Osbourne had yet another losing effort to Ryan Eagles at the CZW 12th Anniversary Show on February 12, 2011.[7] Including a loss to recent Wired TV taping on May 1, 2011.[8] His recent loss was to one of Combat Zone Wrestling's top stars, Robert Anthony at CZW Prelude to Violence 2, in a singles match.[9][10] 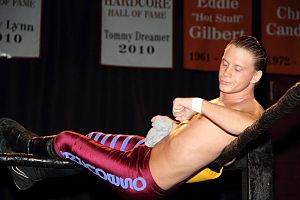 Osbourne made his Beyond Wrestling debut at Miracle Workers - Tag 1 in a tag team match teaming with Fredo Majors against DA Law and Latin Dragon in a successful victory.[11]

Osbourne gained his first win in Combat Zone Wrestling in a singles match against AJ Evers at Aerial Assault at the Boyle's World Gym on March 13, 2012.[12] However, Osbourne recently lost to Dustin Rayz in a dark match at Proving Grounds.[13]

As of 2016, he has been working on the promotions "Dojo Wars" events. He made his CZW Tournament of Death debut in 2017 in a four-way Fans Bring The Weapons match that involved Dan O'Hare, George Gatton and Jimmy Lloyd. Kit also pulled double duty filling out an injured Devon Moore in the tag team Scaffold match pitting Notorious Inc. (Moore and Drew Blood) against Alex Colon and Danny Havoc.

Retrieved from "https://en.everybodywiki.com/index.php?title=Kit_Osbourne&oldid=918670"
Categories:
Hidden categories:
This page was last edited on 4 August 2020, at 03:06.
This page has been accessed 1,085 times.
Content is available under License CC BY-SA 3.0 unless otherwise noted.
Privacy policy
About EverybodyWiki Bios & Wiki
Disclaimers