Kodular is an online suite which primarily provides an online web application that allows the development of apps without knowing how to code. Kodular Creator is an MIT App Inventor distribution, meaning it is built on App Inventor open source project; although it offers big improvements over App Inventor. However, Kodular Creator is not an open source project and the source code is hosted privately on GitHub, but other repositories releated with the Suite are available[1].

The biggest noticeable difference at first glance of this App Inventor distribution is that it has more components, more granular control on the app, and functionality absent in the App Inventor open source project. The suite also provides an online app store as an alternative to the Google Play Store and an extensions IDE for advanced users to code new components for Kodular Creator. In order to provide control over all these services, Kodular also provides Kodular Account, a system to control all services from a single place.

Kodular was founded the 6 July 2017 by Conor Shipp, Diego Barreiro, Mika, Pavitra Golchha, Sander Jochems, Sivagiri Visakan and Vishwas Adiga. The first public beta became available on the next month. At that time, Kodular features were nearly the same ones as MIT App Inventor ones, and the interface was not changed a lot.

Kodular was presented at Galicia Maker Faire on September 2017, which was awarded the Makers of Merit prize.[2] In addition, it was invited to InnovAmes[3] where the platform was introduced to the public.

However, on February, Kodular was turned off to the public due to a massive increase on requests.[4] During that time, Kodular became a company in the Netherlands, and it was presented on Galiciencia 2017 where it was widely covered by the press.[5]

The 22nd June 2018 Kodular Creator became online again, which brought lots of new components and features to the platform.[6] Also, the Kodular Store was released, with Kodular Extensions IDE and Kodular Account.

The word Kodular comes from joining two words: Kode + Modular. The word Kode comes from derivating Code by replacing the C with a K (this was intended as users at Kodular does not use normal Code, they use pseudo-code). Kodular also provides different services, which are called Modules, like the App Store and the Extensions IDE.

Also, it is being said that Kodular in Estonian means "the core", which the purpose of being the core of introduction to coding.[10]

AppyBuilder was one of the main competitors of Kodular Creator. Developed by Hossein Amerkashi, it was the first alternative to and based on MIT App Inventor 2. On August 2019, Kodular announced its acquisition publicly, merging AppyBuilder into its source code.[11]

Hossein Amerkashi became then part of Kodular Creator team, making him the first not-founder developer of the platform.

Kodular Creator (formerly known as Makeroid) is the main web app and the core of all services. It is built primarily for newcomers to computer programming to create software applications for the Android operating system (OS). It has a user graphical interface, similar to Scratch, MIT App Inventor, and its distributions. Only by dragging and dropping a few components, and joining some blocks as in Scratch the app is made. It runs on Google App Engine, using several Google Cloud services. 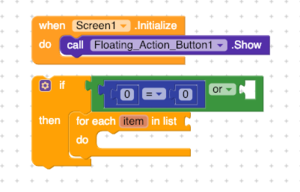 There is a Project's Dashboard with cards containing each app details. On the creator area, there are two pages: Designer and Blocks. On the Designer there is a top panel with dropdowns and four main sections: Palette, Mock, Components and Properties. On the Palette section there is a list of all available components to drop on phone's Mock to design the app. All components can be viewed as a list with its parent in the Components panel, and on Properties section users can change visual properties of those components. On the Blocks page there is a Blockly panel which is used to join blocks to code the app.

Kodular Creator releases use the Semantic Versioning system with a constellation name, following an alphabetical order[12]. From July 2017 to February 2017 these releases were Beta versions, which are not salientable. 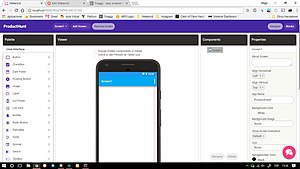 The most important releases are listed below.

Kodular does not directly charge users for its service. Instead, a commission system was implemented to take a proportional amount of revenue from users. If apps do not contain ads, the price is zero, as commission is 0%. If not, the commission starts from a basic 5%, and gets increased depending on the number of components in the app.[13]

Kodular Account is the control panel to monitor all Kodular Modules from a single site. Written in PHP, it communicates with the rest of the services provided using an internal API, providing access to all data shared across all Kodular Modules.

Kodular Extensions IDE is an online IDE for advanced users to create extensions (new components) for the Creator.

Kodular Store is a free alternative to Play Store which allows to share and distribute apps, extensions and screens.

This article "Kodular" is from Wikipedia. The list of its authors can be seen in its historical and/or the page Edithistory:Kodular. Articles copied from Draft Namespace on Wikipedia could be seen on the Draft Namespace of Wikipedia and not main one.

Retrieved from "https://en.everybodywiki.com/index.php?title=Kodular&oldid=988874"
Categories:
Hidden category:
This page was last edited on 27 August 2020, at 13:25.
This page has been accessed 3,021 times.
Content is available under License CC BY-SA 3.0 unless otherwise noted.
Privacy policy
About EverybodyWiki Bios & Wiki
Disclaimers
Mobile view