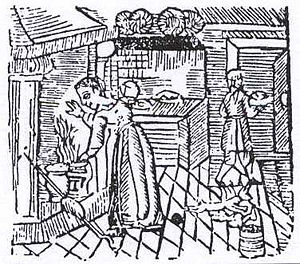 Kraków gingerbread or Kraków gingerbreads (Polish: Krakowski piernik, plural Polish: Krakowskie pierniki) is a variety of gingerbread from Kraków, Poland. Since the 14th century, when Kraków was the capital of Poland, the city was known for its gingerbreads, popular across the land at least as much as the gingerbreads of Toruń and Nuremberg. The spicey dough ("pierne", hence the name) was pressed into elaborate wooden molds with carved images, baked and reportedly kept around for up to 20 years.[1] Before World War II and up until 1940, the most famous producer of Kraków Gingerbreads was the local company called Rothe on ul. Sławkowska street.[2] Modern recipes can be quite elaborate, with flour browned in a pan.[3][4]

A different variety (named singular as "piernik") is a spicy and fluffy dark-brown cake similar to a sponge cake. It can be eaten in several ways: with chocolate sauce or plum jam. Commercial gingerbread cake producers in Kraków include Gellwe.[5] The Kraków Gingerbread is very famous in Southern Poland due to historic reasons, the cake is similar to Polish Royal Gingerbread, although Kraków gingerbread cake has more spices.[6]

Retrieved from "https://en.everybodywiki.com/index.php?title=Kraków_gingerbread&oldid=919256"
Categories:
Hidden categories:
This page was last edited on 4 August 2020, at 09:38.
This page has been accessed 524 times.
Content is available under License CC BY-SA 3.0 unless otherwise noted.
Privacy policy
About EverybodyWiki Bios & Wiki
Disclaimers