The Lakewood Lancers are a high school American football club based in Lakewood, California. The Lancers compete in the Harry J. Moore League as a member club of the CIF Southern Section football division IX. The team was formed in 1957, and it played its first preseason game on September 27, as a charter member of the Moore League.

The team endured several dismal seasons in its formative years (1957–1962). It accounted for only 11 wins in five seasons under the direction of head coach Chuck Toy. In 1962, Lakewood hired John Ford,[1] and he hired coaching assistants Roy Woolbright, Tom Collins, and Warren Stephenson.

During his tenure as head coach from 1963 to 1979, John "T" Ford[2] recorded victories over perennial CIF champions Mater Dei and Long Beach Poly. Before arriving at Lakewood, coach Ford served as a coach at several schools including Rotan High, Hardin Simmons University in Texas, the University of Arizona at Tuscon, Long Beach Jordan and Downey High.[1] While at Hardin Simmons, Ford was an all-conference quarterback before being drafted by the Philadelphia Eagles in 1951. And after six years as a running back coach at ASU, he headed out West to take on a head coaching job at Jordan High School in 1960, where he stayed for one year before taking the reigns at Lakewood two years later.

In 1966[3], Ford led the Lancers to their first of three Moore League championship in school history during the 60s. It was also be the first time the Lancers had defeated the Wilson Bruins by a convincing 33-28 final score in front of over 17,000 screaming spectators at Veteran's Memorial Stadium in Long Beach, California. And after seven years in the basement, the Lancers reached the postseason for the first time. The team would go on to play in the CIF semi-finals, where it was soundly defeated by the El Rancho Dons. At the end of the season, Ford was elected to head the south's team in the California North-South All Star Football game. Since 1966, Lakewood has won 6 conference titles (Division 1), made 38 playoff appearances, played in 6 CIF Semifinals (1966, 1968, 1969, 1970, 2008, 2009 ), and 1 CIF 4-A Championship (1970). Ford had a strict policy for his players to keep their head shaved, thus being labeled "skinheads."

Lakewood had yet another banner season under the command of coach Ford as the Lancers won their second Moore League crown and faced the Anaheim Colonists in the quarter finals of the CIF playoffs.[4] The Lancers saw more action in the semi-finals of the 1969 playoffs when they faced the Blair Vikings and fell short of advancing to the final. It wasn't until the 1970[5] season when Lakewood marched all the way to the Los Angeles Memorial Coliseum for the CIF[6] finals where they fell to Bishop Amat[7] by a single point. The final score in that contest was 18-17.[8] Coach Ford retired in 1979 from Lakewood and went on to coach at LBCC. He was later succeeded by other prominent coaches like Steve Bresnahan, Mike Christensen, Thadd Mac Neal, and Scott Meyer.

John T. Ford was the head coach of the Lancers for 16 seasons. Ford won five Moore League Championships, and remains the all-time most winningest coach at Lakewood with a 105-61-2 record.

Fans stomped on the metal bleachers that became known as "Thunder Stadium." Lakewood's football games easily drew in over 10,000 fans at Veterans Stadium, which became the eventual home field for the Lancers in order to accommodate such a large gathering of student bodies and their families. Veterans Stadium is known as "The Vet." On record, Lakewood's Thunder Stadium can only house 3,000 spectators. In 1998, John Ford was honored by Lakewood alumni when it was announced that Lakewood's football field[9] would be named after Ford.

One of Lakewood football's most notable athletes is former quarterback[10] Mike Rae.[11] Before his career at USC[12] and with the Oakland Raiders,[13] he played high school football in Lakewood, California. From 1966 to 1969, Rae was a multi-sport athlete at Lakewood where he earned All-League and All-City honors in football, basketball and baseball. With Rae at the helm, the Lancers won a Moore League crown in 1968, including a CIF 4-A quarterfinal on November 29, 1968. In that matchup, the Lancers were hoping that their second appearance of the season in Anaheim Stadium would be more productive than the first.

It was six weeks prior when St. Paul tumbled the Lancers 21-6, but Lakewood felt that it had been a different team as of late. The defense had given up only two touchdowns in its last three games, and opened the playoffs with an impressive 24-6 win over previously unbeaten West Torrance. "If we play as well as we have the last two games, we can win," said coach John Ford. "Our defense has picked up a lot of pride, and has actually carried us at times."[14] Anaheim has been in the playoffs seven of the last eight years. During the 1968 season, it had relied on a stingy defense that yielded only 98 points in 10 games. 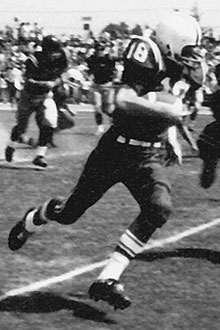 As a member of the Lakewood Football Hall of Fame class of 2004, Mike Rae earned the posthumous Citadel Ironman Award for 1968-69.

The Colonists' only loss was to Westminster, 14-2 — a team Lakewood beat in its opener 21-12. Junior quarterback George Fraser[15], who sparked the team in the playoffs in 1967[16], had had another big season, completing 73 of 139 passes for 1,148 yards and 8 touchdowns. His favorite receiver was 6-4 Dan Simpson[17] with 34 passes for 666 yards. Anaheim's strong point had been its defense. The Colonists had given up 157 yards a game on the ground. For a team that was supposed to rely on its defense to do all the work, Anaheim couldn't complain one bit about the offense doing its share at the Big A. The Colonists, with George Fraser[15] leading the way, rolled up 348 yards in a 47-27 quarterfinal playoff defeat of Lakewood before 12,724 fans.

Fraser threw four touchdown passes and ran for another in displaying the form that sparked Anaheim in the playoffs in 1967[17]. The junior QB completed nine of 14 passes for 167 yards as the Colonists ran their season record to 10-1. The Lancers[14] had taken the second half kickoff and driven down field to tie the score at 14-all on a six-yard run by sophomore Mike Owens with only 4:43 gone. Anaheim was forced to punt after the ensuing kickoff and junior Kim Hannaford[18] returned the kick 43 yards down the sideline to put Lakewood on the Anaheim 28. After two rushing plays gained seven yards, a clipping penalty set the Lancers back to the 35, where Owens fumbled away the ball and Jim Rice recovered on the 28.

Anaheim scored five of the next six times they got their hands on the ball. Fraser passed 40 yards to Mickey West to go up 20-14 on the last play of the third quarter. Marc Kemp's conversion attempt was wide to the right. But Lakewood turned right around and played give-away as Mike Rae[19] fumbled on his own 20 two plays after the kickoff, and Denny Hilsabeck was ever-present.

On third and 11 at the 20, Fraser[15] connected with Dan Simpson between two Lancers in the end zone. Simpson, who played center on Anaheim's basketball team, earlier caught first-half TD passes of 42 and 3 yards from Fraser. In all, 40 points were scored in the final 12 minutes, which took 45 minutes to play. Three touchdowns were scored in the final 60 seconds, one on a 51-yard kickoff return by Vic Barruga after Lakewood had attempted an onside kick. Lakewood trailed Anaheim by five yards (348-343) in total offense and got good passing from Rae, who hit on 17 of 30 for 208 yards. Mike Rae[20] went on to USC[21] where he led the Trojans to a National Title[22][23] at quarterback[24]. Rae[25] was also drafted by the Oakland Raiders in 1976, where he filled in as a backup QB to Pro Football Hall of Famer Ken Stabler[26] and won a Super Bowl ring in his first season with the Raiders[27] in Super Bowl XI before being traded to the Tampa Bay Buccaneers.

File:Lakewood Uniform 66.png
In 1966, the Lakewood Lancers adopted the red-on-red look with the addition of red pants over the plain white. It became a visual icon for the Lancers and the city of Lakewood.

In 1966, the Lakewood Lancers[28] added red pants as part of their new uniform. Lakewood wore plain white pants until the introduction of the red.

One tradition of football in the L.B.U.S.D was the Parent Teacher Association (PTA) Milk Bowl.[29] Founded in 1940, the Milk Bowl was an annual event used to raise funds to purchase milk and subsidize dental and medical fees for needy children. It was held at Veterans Stadium just before the start of the preseason. All of the Moore League schools would participate in a scrimmage game to help raise funds, and they included teams from Lakewood, Millikan, Poly, Jordan, Wilson and Compton.

1970 marked one of Lakewood's most successful football seasons in the school's history. John Ford[6] coached the only Lancers team to make an appearance in the CIF finals. Bishop Amat and Lakewood were the No. 1 and No. 2 ranked teams in the state of California battling to a 17-17 tie before a record crowd of 31,012 fans at the Los Angeles Memorial Coliseum. At the time, it was the second largest attendance in CIF postseason history. Under the California tie-breaker system that only went into effect in 1969, the winner was determined by which team gained more yardage from the fifty-yard line. Each team was given four plays to run alternately, awarding Bishop Amat an 18-17 decision. Lakewood returned to the CIF semifinals in 2004, 2008 and 2009, where it was eliminated in all three contests.

This article incorporates text by Lakewood Football available under the CC BY-SA 3.0 license. The text and its release have been received by the Wikimedia Volunteer Response Team; for more information, see the talk page.

Share
Retrieved from "https://en.everybodywiki.com/index.php?title=Lakewood_Football&oldid=1016032"
Category:
Hidden categories:
This page was last edited on 21 September 2020, at 10:15.
Content is available under License CC BY-SA 3.0 unless otherwise noted.
This page has been accessed 1,757 times.
Privacy policy
About EverybodyWiki Bios & Wiki
Disclaimers