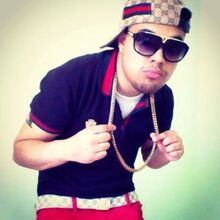 Gerrald Elijah Careathers was born on March 9, 1991 in Sacramento, California. and later moved to Chattanooga, Tennessee at the age of 6. He attended Barger Elementary, East Ridge Middle School, and Ooltewah High School.

Lil Booku is a hip-hop rapper artist. He has gradually risen through the ranks as he continues to pursue his musical passion for gaining global recognition as a rapper. Lil Booku reinvents the hip-hop genre by using modern hip-hop sounds to characterize his spirituality. He redefines the parameters of hip-hop music for his listeners with his unique take on it.

Lil Booku’s most recent release is his new single, “Brand New Pop Culture Star.” Listeners will find this hip-hop rap so on-brand that they can tell it’s Lil Booku’s song just by the title. The song is about the artist working towards turning his hopes and dreams of becoming a prominent hip-hop rapper into reality.

Lil Booku has released several songs on SoundCloud over the last few months, garnering quite a fanbase for himself. His most popular song, “The Fam Got All My Loyalty,” has more than 1 million plays on SoundCloud. His other successful releases include “I Got Power,” “The Money Keep Coming In,” and “I Made It.”

“Brand New Pop Culture Star” is Lil Booku’s way of putting himself on the radar of the music industry. The youthful listeners will enjoy this hip-hop music and rap that emphasizes the artist’s dedication to his musical craft to move forward in life.

Gerrald Elijah Careathers is better known by his stage name, Lil Booku. Although born in Sacramento, California, the musical journey of Lil Booku started in Chattanooga, Tennessee. He is a Black-Puerto Rican rapper, songwriter, and entrepreneur. His songs are representative of the hip-hop genre, inspired by his spiritual belief in The Great Divine. The rapper’s unique mix has made him a rising star in the pop-culture music industry.

Lil Booku's song The Fam Got All My Loyalty went viral due to online radio play.

Lil Booku is diagnosed with anxiety, paranoia, schizophrenia. He takes meds and sees a doctor every few months.

Lil Booku only dates the female gender, he is not gay and is also currently single.

Lil Booku has zero kids at the moment.

Retrieved from "https://en.everybodywiki.com/index.php?title=Lil_Booku&oldid=1405121"
Categories:
Hidden categories:
This page was last edited on 20 February 2021, at 19:47.
This page has been accessed 7,400 times.
Content is available under License CC BY-SA 3.0 unless otherwise noted.
Privacy policy
About EverybodyWiki Bios & Wiki
Disclaimers
Mobile view