In 1968 and 1969, he served as one of two main receivers for Terry Bradshaw, the Shreveport native who subsequently embarked on a highly successful career with the Pittsburgh Steelers. Brewer caught the first college touchdown pass thrown by Bradshaw. Brewer was initially given a two-year contract with the Atlanta Falcons, but he left the team after sustaining an injury at the training camp in Johnson City, Tennessee.

In 1969, Brewer was among five members of the Louisiana Tech football team selected for All-Gulf State Conference honors by the Louisiana Sports Writers Association. The others were Bradshaw, split end Thomas Allen "Tommy" Spinks of Shreveport and later Arlington, Texas, offensive tackle Wayne Williams, Jr., later the Webster Parish school superintendent, and defensive back Mark Graham. Brewer and Spinks were recorded among the top pass receivers in Louisiana Tech history. Seven other Tech players were cited for "honorable mention" by the same sports writers, who also selected Tech coach Maxie Lambright as the GSC "Coach of the Year".

Brewer played in four post-season classics, including two Grantland Rice Bowls, the North-South Shrine Game, and the Senior Bowl in Mobile, Alabama. He was voted Minden's "Outstanding Advertiser" a month before "Larry Brewer Day" was observed in his hometown on May 14, 1970.[1] 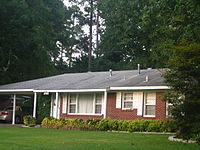 Brewer was born in Minden to the former Helen Lockhart (1924–2018), a former civil servant originally from Ringgold in Bienville Parish,[2] and Henry Clinton "Clint" Brewer (1920–2008), a graduate of Doyline High School in Doyline in south Webster Parish. The senior Brewer attended United Methodist-affiliated Centenary College in Shreveport, compiled a distinguished military record in World War II, was commissioned a Second Lieutenant in the Louisiana National Guard, and served as the Webster Parish registrar of voters until his retirement in 1985.[3]

Larry Brewer played successfully for Minden High School, from which he graduated on May 24, 1966. He procured his bachelor's degree from Tech, located in Ruston in Lincoln Parish, and then coached football at several private schools including Trinity Heights Academy in Shreveport and Sam Barthe School for Boys in Metairie in Jefferson Parish. Brewer also taught junior high school science at Barthe. His first wife, Nancy, taught mathematics at the same school. Brewer subsequently left coaching and received a Master of Science degree from the University of Louisiana at Monroe in Ouachita Parish and thereafter passed the Certified Public Accountant examination. He was a hospital administrator in Ruston, Shreveport, and later for the Hillcrest Health Group in Tulsa, Oklahoma.

Brewer drowned while on a family vacation in Honolulu, Hawaii. He is interred in Sand Springs near Tulsa. In addition to his parents, he was survived by his second wife, the former Toni Milam, since Toni Harris of Hot Springs, Arkansas, the wife of John Harris; three children, Blake, Marcus, and Natalie Brewer, and a brother, Gary Loftin Brewer (born 1951) and his wife, Pamela Hill Brewer, and their three children, of the resort city of Glenwood Springs, Colorado.[2]

One of Brewer's first cousins, Michael L. "Mike" Brewer (born 1946), was also a highly talented athlete: All-District in football in 1962 and 1963 and All-State in baseball, football, and track in 1963.[4] Mike Brewer signed a football scholarship with Louisiana State University in Baton Rouge, but like his cousin, his career ended because of an injury. Mike Brewer and his wife, the former Cynthia "Cindy" Williams (born 1947), reside in the Memphis suburb of Collierville, Tennessee.

Others articles of the Topics Louisiana AND American football : Harmon Caldwell Drew

Share
Retrieved from "https://en.everybodywiki.com/index.php?title=Larry_C._Brewer&oldid=920541"
Categories:
Hidden categories:
This page was last edited on 4 August 2020, at 19:02.
Content is available under License CC BY-SA 3.0 unless otherwise noted.
This page has been accessed 2,958 times.
Privacy policy
About EverybodyWiki Bios & Wiki
Disclaimers