A ledger[1] is the principal book or computer file for recording and totaling economic transactions measured in terms of a monetary unit of account by account type, with debits and credits in separate columns and a beginning monetary balance and ending monetary balance two account.

The ledger is a permanent summary of all amounts entered in supporting journals which list individual transactions by date. Every transaction flows from a journal to one or more ledgers. A company's financial statements are generated from summary totals in the ledgers.[2]

For every debit recorded in a ledger, there must be a corresponding credit so that the debits equal the credits in the grand totals.

Types on the basis of purpose[edit]

The three types of ledgers are the general, debtors, and creditors.[4] The general ledger accumulates information from journals. Each month all journals are totaled and posted to the General Ledger. The purpose of the General Ledger is therefore to organize and summarize the individual transactions listed in all the journals. The Debtor Ledger accumulates information from the sales journal. The purpose of the Debtors Ledger is to provide knowledge about which customers owe money to the business, and how much. The Creditors Ledger accumulates information from the purchases journal. The purpose of the Creditors Ledger is to provide knowledge about which suppliers the business owes money to, and how much.

Types on the basis of format[edit]

A ledger can have the following two formats.

This type of ledger is made up of paper. It can be physically touched. Ledgers were invented several centuries ago and this used to be the only available form until the widespread adoption of computers, in the mid to late 20th century.

This type of ledger is a digital file, or collection of files, or a database. It can be manipulated only by means of computer programs, since it does not have a physical form. 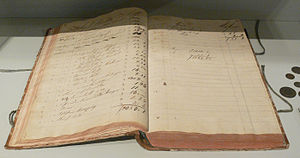 The term ledger stems from the English dialect forms liggen or leggen, meaning "to lie or lay" (Dutch: liggen or leggen, German: liegen or legen); in sense it is adapted from the Dutch substantive legger, properly "a book laying or remaining regularly in one place". Originally, a ledger was a large volume of scripture or service book kept in one place in church and openly accessible. According to Charles Wriothesley's Chronicle (1538), "The curates should provide a booke of the bible in Englishe, of the largest volume, to be a ledger in the same church for the parishioners to read on."

In application of this original meaning the commercial usage of the term is for the "principal book of account" in a business house.

Share
Retrieved from "https://en.everybodywiki.com/index.php?title=Ledger&oldid=207390"
Categories:
Hidden categories:
This page was last edited on 5 November 2018, at 14:20.
Content is available under License CC BY-SA 3.0 unless otherwise noted.
This page has been accessed 997 times.
Privacy policy
About EverybodyWiki Bios & Wiki
Disclaimers