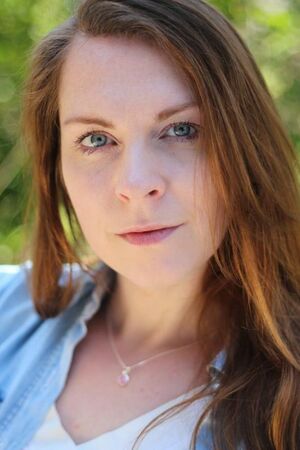 Lisa Jay Jenkins is a British actress from Wales. Best known for her leading role in World War 2 independent feature film Hearts at War (2015) and is becoming established as a horror actress with her recent leading role as Lacey in Show Me Witch Way (2020).[1].

Born in Carmarthen, South Wales, Lisa was raised in the harbour town of Burry Port. Her interest in acting began when she joined Llanelli Youth Theatre where she performed in many theatre productions including Bugsy Malone. Her theatre training began in college where she studied BTEC ND in Performing Arts at Graig CCTA (now Coleg Sir Gar) taking part in productions of South Pacific and notably in her role of Polly in The Matchgirls written by Bill Owen. Her training continued at Swansea Institute of Higher Education (now Swansea Metropolitan University) where she was a founding member of Whatabout Theatre Company.

Lisa completed her final year of training at University College Worcester before leaving acting briefly to study teaching. After completing her PGCE in secondary drama at UCE Birmingham Lisa worked in secondary education until she was drawn back into acting in 2011.

Lisa first came to be known on tv through appearing on many game shows including the very first series of Pointless in 2009 and the second series of The Chase in 2010. After experiencing television Lisa returned to acting but with a focus on tv and film acting. On completing numerous short films she was cast in her first feature film The Alexerudd Affair in 2012 followed by the horror Valley of the Witch directed by Andrew Jones (filmmaker) released in 2014. Subsequent roles came in Hearts at War (2014) and District Nurse (2018) [2].

Share
Retrieved from "https://en.everybodywiki.com/index.php?title=Lisa_Jay_Jenkins&oldid=2265768"
Categories:
Hidden categories:
This page was last edited on 22 January 2022, at 20:58.
Content is available under License CC BY-SA 3.0 unless otherwise noted.
This page has been accessed 434 times.
Privacy policy
About EverybodyWiki Bios & Wiki
Disclaimers