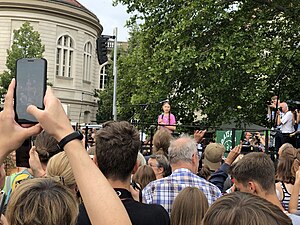 This is a list of notable speeches by Swedish climate activist Greta Thunberg.

An online archive of all of Thunberg speeches is available[1]

On 24 November 2018, she spoke at TEDxStockholm.[2][3] She spoke about realizing, when she was eight years old, that climate change existed and wondering why it was not headline news on every channel, as if there was a world war going on. She said she did not go to school to become a climate scientist, as some suggested, because the science was done and only denial, ignorance, and inaction remained. Speculating that her children and grandchildren would ask her why they had not taken action in 2018 when there was still time, she concluded with "we can't change the world by playing by the rules, because the rules have to be changed."[4]

Thunberg addressed the COP24 United Nations climate change summit on 4 December 2018,[5] and also spoke before the plenary assembly on 12 December 2018.[6][7] During the summit, she also participated in a panel talk together with representatives of the We Don't Have Time foundation, in which she talked about how the school strike began.[8] 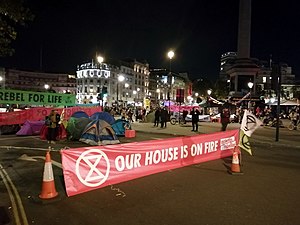 On 23 January 2019, Thunberg arrived in Davos after a 32-hour train journey,[9] in contrast to the many delegates who arrived by up to 1,500 individual private jet flights,[10] to continue her climate campaign at the World Economic Forum.[11][12] She told a Davos panel "Some people, some companies, some decision makers in particular have known exactly what priceless values they have been sacrificing to continue making unimaginable amounts of money. I think many of you here today belong to that group of people."[13]

Later in the week, she warned the global leaders that "I don't want you to be hopeful. I want you to panic. I want you to feel the fear I feel every day. And then I want you to act. I want you to act as you would in a crisis. I want you to act as if the house was on fire—because it is".[14] She has also stated that that politicians and decision-makers need to listen to the scientists.[15] She wrote in an article for The Guardian in January 2019: "According to the IPCC (Intergovernmental Panel on Climate Change), we are less than 12 years away from not being able to undo our mistakes. In that time, unprecedented changes in all aspects of society need to have taken place, including a reduction of our CO
2 emissions by at least 50%".[16]

On 21 February 2019, she spoke at a conference of the European Economic and Social Committee and to European Commission chief Jean-Claude Juncker, where she said that to limit global warming to less than the two degrees C goal established at the Paris Agreement, the EU must reduce their CO
2 emissions by 80% by 2030, double the 40% goal set in Paris. "If we fail to do so" she said, "all that will remain of our political leaders' legacy will be the greatest failure of human history." Later, she joined 7,500 Belgian students in a climate protest in Brussels.[17][18]

In the weekend 29–31 March 2019, Thunberg visited Berlin. She spoke in front of some 25,000 people near the Brandenburg Gate on 29 March, where she argued that "We live in a strange world where children must sacrifice their own education in order to protest against the destruction of their future. Where the people who have contributed the least to this crisis are the ones who are going to be affected the most."[19] After the speech, Thunberg and fellow climate activist Luisa Neubauer visited the Potsdam Institute for Climate Impact Research and met with scientists there. On 30 March, Thunberg received the 'Golden Camera' Special Award on Germany's annual film and television award show. In her acceptance speech at the gala, Thunberg urged celebrities everywhere to use their influence and do their fair share of climate activism to help her.[20][21][22]

At an April 2019 meeting at the European Parliament in Strasbourg with MEPs and EU officials, Thunberg chided those present "for three emergency Brexit summits and no emergency summit regarding the breakdown of the climate and the environment". Climate change discussions have not been dominant at EU summits because other issues have taken precedence.[23] She said the world is facing its "sixth mass extinction" and said: "We have not treated this crisis as a crisis; we see it as another problem that needs to be fixed. But it is so much more than that. It’s an existential crisis, more important than anything else."[23][24]

In May 2019, Thunberg met with Arnold Schwarzenegger, United Nations Secretary-General António Guterres, and Austrian President Alexander Van der Bellen at the launch of a conference organised by Schwarzenegger to speed up progress toward the Paris Agreement.[25] Quoting the most recent IPCC report she said: "If we haven't made the changes required by approximately the year 2030, we will probably set off an irreversible chain reaction beyond human control. Then we will pass a point of no return which will be catastrophic." 17,000 people attended the event from 30 different countries.[26]

On 21 July 2019, Thunberg received the Normandy's Freedom Prize. In her speech she said: "Yesterday I spent the day with the D-day veteran Charles Norman Shay at Omaha beach. It was a day I will never forget. Not only because of the unimaginable bravery and sacrifices made by those who gave their lives to defend the freedom and democracy of the world. But also because they managed to do the seemingly impossible possible. I think the least we can do to honour them is to stop destroying that same world that Charles, Léon and their friends and colleagues fought so hard to save for us."[27]

On 18 September 2019, Thunberg appeared before the United States House of Representatives Select Committee on the Climate Crisis: "Voices Leading the Next Generation on the Global Climate Crisis" and delivered an eight sentence statement instead of offering testimony. She said: "My name is Greta Thunberg. I have not come to offer prepared remarks at this hearing. I am instead attaching my testimony. It is the IPCC Special Report on Global Warming of 1.5 °C [SR1.5] which was released on October 8, 2018. I am submitting this report as my testimony because I don’t want you to listen to me. I want you to listen to the scientists. And I want you to unite behind the science. And then I want you to take action."[28]

On 20 September 2019, Thunberg spoke to New York City's contingent of the Global Climate Strike. The demonstration in New York City was one of hundreds around the world with millions of people taking part. Young people were joined by adults for the first time since the strikes began. Thunberg drew laughter when she described how the politicians that she met asked her for selfies and "tell us they really, really admire what we do yet have done nothing to address the climate crisis."[29][30]

On 23 September 2019, Thunberg addressed the assembled world leaders at the 2019 UN Climate Action Summit held in New York City. Accusing world leaders of stealing her dreams and her childhood by their inaction on climate change, she opened her speech to the General Assembly with an impassioned introduction, which was widely covered by the media.

"This is all wrong. I shouldn’t be up here. I should be back in school on the other side of the ocean. Yet you all come to us young people for hope? How dare you! You have stolen my dreams and my childhood with your empty words. And yet I’m one of the lucky ones. People are suffering. People are dying. Entire ecosystems are collapsing. We are in the beginning of a mass extinction. And all you can talk about is money and fairytales of eternal economic growth. How dare you!"[31] "You are failing us." Thunberg stated. "But the young people are starting to understand your betrayal. The eyes of all future generations are upon you. And if you choose to fail us, I say: We will never forgive you.[32]

Greta Thunberg speaking at the Climate March in Montreal (Canada).

On 27 September 2019, Thunberg was in Montreal, Canada, for its Global Climate Strike; she used an electric car for transportation that she borrowed from Arnold Schwarzenegger. Thunberg briefly spoke and fielded questions at a Global Climate Strike press conference. She said: "It is very moving to see everyone who is so passionate to march and strike. People of all ages, all generations. It is a very good day, I would say".[36] When asked why she invited indigenous youth to help lead the march, she said: "Indigenous people have for centuries and millenniums protected the local environment and of course we need to because they are often the ones who are being, who are at the front line, so we need to be able to hear their voices. So that’s why I think it’s so important that indigenous people lead this fight".[36] Thunberg was asked if she had a specific message for the Prime Minister of Canada, Justin Trudeau (she had met with the Prime Minister before the press conference). "My message to all the politicians is the same – to listen to the science and act on the science," she said.[36]

Following the press conference, Thunberg joined First Nations Indigenous people and together they led the climate march. After the marchers gathered at the main stage, Thunberg delivered a speech which was peppered with French. Thunberg told Montreal marchers that the fight against climate change will not stop until world leaders take the problem seriously.[37]

On 11 December 2019, Thunberg addressed the COP25. In part, she stated: “For about a year I have been constantly talking about our rapidly declining carbon budgets over and over again. But since that is still being ignored, I will just keep repeating it. In chapter two, on page 108 in the SR 1.5 IPCC report that came out last year, it says that if we are to have a 6 percent to 7 percent chance of limiting the global temperature rise to below 1.5C degrees, we had on January 1, 2018, 420 gigatons of CO2 left to emit in that budget. And of course, that number is much lower today as we emit about 42 gigatons of CO2 every year including land use.... In just three weeks, we will enter a new decade, a decade that will define our future. Right now we are desperate for any sign of hope. Well, I’m telling you, there is hope. I have seen it but it does not come from the governments or corporations. It comes from the people. The people who have been unaware but are now starting to wake up. And once we become aware, we change. People can change. People are ready for change. And that is the hope because we have democracy and democracy is happening all the time." [38]

Retrieved from "https://en.everybodywiki.com/index.php?title=List_of_Greta_Thunberg_speeches&oldid=922892"
Categories:
Hidden categories:
This page was last edited on 5 August 2020, at 08:07.
This page has been accessed 244 times.
Content is available under License CC BY-SA 3.0 unless otherwise noted.
Privacy policy
About EverybodyWiki Bios & Wiki
Disclaimers
Mobile view