Wahbi Khazri with Tunisia in 2018 FIFA World Cup against Panama.

In 2009, Wahbi Khazri made his debut for the Tunisia national under-20 football team.[1] However, in November 2011, he was called up by Erick Mombaerts to the France national under-21 football team for a pair of 2013 UEFA European Under-21 Football Championship qualifiers against Romania and Slovakia.[2] In February 2012, he played his first and only game for the French side, against Italy, before being substituted by Frédéric Bulot.[3]

In late 2012, Khazri switched his international allegiance once again, when he accepted a call-up from Sami Trabelsi, the Tunisian national team's coach, including him in the squad for the 2013 African Cup of Nations.[4] Henryk Kasperczak named Khazri among 23 Tunisians to compete at the 2017 Africa Cup of Nations in Gabon.[5] In the final group game, a 4–2 win over Zimbabwe at the Stade d'Angondjé, he assisted Naïm Sliti and scored a penalty in a 4–2 win that put the Carthage Eagles through at the expense of a favoured Algeria side.[6]

Manager Nabil Maâloul called up Khazri for Tunisia's squad at the 2018 FIFA World Cup in Russia.[7] In the second group match, he assisted Dylan Bronn and scored himself in added time in a 5–2 loss to Belgium in Moscow.[8] With both teams already eliminated, he then played his part in a 2–1 comeback win over Panama that was Tunisia's first at the World Cup since 1978; he set up Fakhreddine Ben Youssef and then scored the winning goal, the 2,500th in the competition's history.[9] Khazri was the captain of the Tunisian side that came fourth at the 2019 Africa Cup of Nations in Egypt. In their second group game, he equalised to earn a 1–1 draw with Mali in Port Suez.[10] 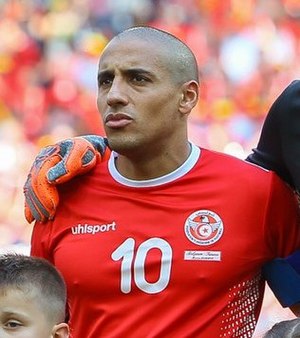 Wahbi Khazri with Tunisia in 2018 FIFA World Cup against Belgium.

Retrieved from "https://en.everybodywiki.com/index.php?title=List_of_international_goals_scored_by_Wahbi_Khazri&oldid=924316"
Categories:
Hidden categories:
This page was last edited on 5 August 2020, at 18:42.
This page has been accessed 226 times.
Content is available under License CC BY-SA 3.0 unless otherwise noted.
Privacy policy
About EverybodyWiki Bios & Wiki
Disclaimers