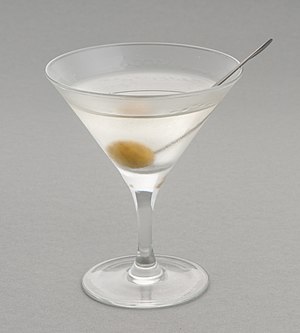 A martini with an olive garnish

Many variations exist on the standard martini.

Variations on the gin or vermouth[edit]

A martini should be well chilled. Conventionally they are carefully stirred with ice, then strained, to leave as little ice as possible in the glass afterwards. A martini that is 'shaken, not stirred' would be chilled, but it would also tend to break up the ice, leaving the smaller fragments to melt and so dilute the drink. Bond orders his martinis diluted.

Sometimes the term "martini" is used to refer to other mostly-hard-liquor cocktails such as Manhattan, Cosmopolitan, and ad hoc or local concoctions whose only commonality with the drink is the cocktail glass in which they are served. Chefs with a more whimsical bent are even producing dessert "martinis" which are not a drink at all, but are merely served in martini glasses.

Another popular form is the espresso martini, popular in restaurants as a dessert. Many variations exist but most involve shaking an espresso shot with the ingredients and served in a chilled martini glass. By shaking a fresh espresso shot it creates a hard layer of crema which is garnished with three coffee beans in the centre.[1]

Retrieved from "https://en.everybodywiki.com/index.php?title=List_of_martini_variations&oldid=924414"
Categories:
Hidden categories:
This page was last edited on 5 August 2020, at 19:19.
This page has been accessed 207 times.
Content is available under License CC BY-SA 3.0 unless otherwise noted.
Privacy policy
About EverybodyWiki Bios & Wiki
Disclaimers
Mobile view