The following is a list of all singers worldwide who have recorded at least 100 songs: 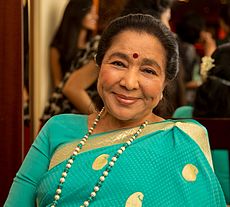 Asha Bhosle was recognised as Gunness Book for most songs in 2011, having recorded 12,000 songs until overtaken by compatriot P. Susheela. She was selected as one of the 20 musical icons of the past century conducted by CNN alongside Michael Jackson, Elvis Presley etc.

Retrieved from "https://en.everybodywiki.com/index.php?title=List_of_prolific_singers&oldid=924807"
Category:
This page was last edited on 5 August 2020, at 23:26.
This page has been accessed 112 times.
Content is available under License CC BY-SA 3.0 unless otherwise noted.
Privacy policy
About EverybodyWiki Bios & Wiki
Disclaimers