Lord & Taylor is an American luxury department store chain, and the oldest department store in the United States.[3] As of August 2019[update], it consists of 38 stores and one outlet store. The flagship store at the Lord & Taylor Building on Fifth Avenue in New York City operated from 1914 until 2019.[4] The chain has been a subsidiary of Le Tote since November 2019.

English-born Samuel Lord started a dry goods business in New York in 1824 and opened the original store that would become Lord & Taylor in 1826, on Catherine Street in what is now Two Bridges, Manhattan. The shop stocked hosiery, misses' wear, and cashmere shawls.[5] His wife's cousin, George Washington Taylor, joined in 1834, and the store was named Lord & Taylor.[6] The store continued to grow: it annexed 49 Catherine Street in 1832 and moved six years later to 61–63 Catherine Street.[7][8] James S. Taylor, Lord's brother-in-law, replaced George Taylor in 1845.[6] The company erected a new building at Grand and Chrystie Streets in 1853 and moved into that location the next year.[6][8] Lord later named his son John T. Lord and his employee John S. Lyle as partners in the enterprise.[8]

On August 29, 1859, Lord & Taylor opened a second store on Broadway at Grand Street in the modern-day SoHo neighborhood, keeping the older store open.[5][6] The new store was described as a "five-story marble emporium" and was among Broadway's first major new department stores since the A.T. Stewart building at 280 Broadway was completed in 1846. At the same time, Lord & Taylor started participating in wholesaling.[8] Lord retired in 1862.[5] Samuel Lord Jr. and George Washington Taylor Lord succeeded the original partners in leading the company.[8]

In 1870, the Broadway store moved uptown to a new cast-iron building at Broadway and 20th Street, in the area known as the "Ladies' Mile".[5] This store was designed by James H. Giles and included one of the first steam-powered passenger elevators.[8] The new store expanded around 1890 by annexing a building to east.[9] Lord & Taylor faced economic troubles after the Panic of 1873, though the original partners gave the company "a large loan" in 1879. By 1894 the company was fast growing, and would open stores on Fifth Avenue in 1903 and 1906.[8] The downtown store continued to function, expanded through to Forsyth Street, and advertised until at least 1887 as a new building. Samuel Lord's estate sold the Grand Street store in 1901.[10][11][12][13][14][15][16][17]

Lord & Taylor announced in November 1915 that it would sell off its wholesale business.[21]

A founding unit of Associated Dry Goods, Lord & Taylor was considered to be its "crown jewel". When the May Company acquired ADG in 1986, it was assumed that May bought it just for the luxury division.[22][23]

In 1945, Dorothy Shaver became the first woman to head a major retail establishment in the United States as president of Lord & Taylor.[24] As vice president working with the well-known design firm of Raymond Loewy Associates, she opened what is credited as the first ever branch store, in Manhasset, New York. Unlike earlier forays into the suburbs that consisted of smaller boutique-style shops, this was a merchandising effort that became the model for modern suburban shopping. The store consisted of 66 individual shops. Lord & Taylor's relationship with Raymond Loewy Associates continued until 1969, following the construction of the Stamford, Connecticut, store (designed by Loewy Vice President Andrew Geller).[25] Many of Lord & Taylor's special services, including personal shoppers, were introduced while Shaver presided.[26] During this period she introduced the Andrew Geller hand written logo and the American Beauty Rose as icons of the store. Shaver died in 1959.[24][27][28]

William J. Lippincott was elected chairman and chief executive in 1972. His obituary in The New York Times read: "In his years as president and chairman, Lord & Taylor moved beyond its traditional territory in the northeast to open stores in Atlanta, Houston and Dallas and four stores in Illinois."[29][30] A management shakeup ousted him in 1976.[31]

Under the leadership of CEO Joseph E. Brooks during the 1970s, the company aggressively expanded into Texas, Illinois and Michigan; in the early 1980s, South Florida saw 11 stores opened in quick succession.

The chain partially withdrew from the oil-shocked Texas and southern Florida markets in 1989–1990 after its 1986 acquisition by May.[32] Under May, the majority of the upscale Hahne & Co., Wanamaker's, and Woodward & Lothrop chains were converted to Lord & Taylor.[33][34][35]

Federated Department Stores, now Macy's Inc, acquired May Department Stores on August 30, 2005. On January 12, 2006, Federated chairman, president, and CEO Terry Lundgren announced that Lord & Taylor would be sold by the end of the year.[40] In a move that took advantage of valuable real estate, Federated announced on March 10, 2006, that seven conflicting Lord & Taylor locations would either close or downscale into Macy's.[41] The legendary Center City, Philadelphia store, former flagship of the John Wanamaker chain, opened after a one-month renovation as Macy's City Center on August 1, 2006. On June 22, 2006, NRDC Equity Partners, LLC announced it would purchase Lord & Taylor for $1.2 billion after Federated converted and closed the seven locations that it previously announced were closing; the sale completed in October 2006.[42] Federated continued to service Lord & Taylor consumer credit accounts in an agreement with NRDC under the terms of its sale until mid-2007. 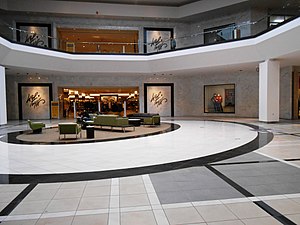 On July 16, 2008, NRDC Equity Partners announced that it had purchased the 338-year-old Hudson's Bay Company (HBC) for an undisclosed price, with the intention of expanding internationally, and positioned Lord & Taylor under HBC. The combined HBC, as of February 2018, consisted of Hudson's Bay and Home Outfitters in Canada, Galeria Kaufhof in Germany, and Lord & Taylor and Saks Fifth Avenue in the United States.[43][44]

HBC committed to spend an additional $250 million upgrading stores. The Fifth Avenue flagship store received a $150 million update in 2010.[45] In March 2017, Lord & Taylor partnered with Brideside to launch an in-store bridal shop.[46] In April 2017, Lord & Taylor completed a $12 million renovation plan at the Fifth Avenue store,[47] however in October 2017 they announced that they were selling the building to WeWork for $850 million.[48] In February 2019 the sale completed for $725 million in cash and the remainder in equity, forming a joint venture with Lord & Taylor was minority owners.[49]

On April 1, 2018, the Hudson Bay Company gave notice of a theft of customers credit and debit cards due to a hacking incident. A hacking group, known as JokerStash or Fin7, was attempting to sell the information from five million stolen customer credentials on dark web sites during the last week of March 2018. The company noted that the majority of the compromised records appeared to be from Lord & Taylor and Saks Fifth Avenue customers. The Hudson Bay Company noted that customers would not be liable for any charges incurred due to his breach and they will offer no cost credit report monitoring and identity protection services.[50]

In May 2018, Walmart began carrying Lord & Taylor products on their website.[51] A few weeks later, HBC announced they would be closing up to ten Lord & Taylor stores, including the 5th Avenue location, amid declining store sales.[52] The New York flagship store closed on January 2, 2019.[53]

During the fall of 2019, full-line store closings were announced in Nyack, NY, Woodbridge, NJ, Moorestown, NJ, Dulles, VA, and McLean, VA; and a FIND @ Lord & Taylor outlet was closed in Paramus, NJ. In November, 2019, the sale to Le Tote was finalized and it was reported that all 38 remaining Lord & Taylor stores would be kept open.[63] Previously, five of the 38 stores were to be closed, according to the purchase agreement from HBC.[64]

Other articles of the topics Companies AND Fashion : W RUGBY, LEAF Where you stand, Walveey, Frickls LLC

Other articles of the topics Fashion AND New York City : Nina Cuso

Other articles of the topic New York City : Nord Anglia International School New York, Tumblr, JetBlue Foundation, William Hawthorn Lynch, William Mackenzie Davidson, American Broadcasting Company, Buck Sexton
Some use of "" in your query was not closed by a matching "".

Share
Retrieved from "https://en.everybodywiki.com/index.php?title=MOOD_Designer_Fabrics&oldid=2213965"
Categories:
Hidden categories:
This page was last edited on 30 December 2021, at 18:55.
Content is available under License CC BY-SA 3.0 unless otherwise noted.
This page has been accessed 1,536 times.
Privacy policy
About EverybodyWiki Bios & Wiki
Disclaimers