Benjamin Hammond Haggerty[2] (born June 19, 1983), known by his stage name Macklemore (/ˈmæk.ləmɔːr/ MAK-lə-mor),[3][4] (formerly Professor Macklemore), is an American rapper, singer, and songwriter, from Seattle, Washington. He has collaborated with producer Ryan Lewis as Macklemore & Ryan Lewis. Since 2000, he has independently released one mixtape, three EPs, and four albums.

Macklemore and Lewis's single "Thrift Shop" reached number one on the U.S. Billboard Hot 100 in 2013.[5] The single was soon dubbed by Billboard as the first song since 1994 to top the Hot 100 chart without the support of a major record label, although Macklemore, in a slightly unusual recording contract, pays a nominal percentage of sales to use Warner Bros. Records's radio promotion department to push his singles.[6][7] Their second single, "Can't Hold Us", also peaked at number one on the Hot 100 chart, making Macklemore and Lewis the first duo in the chart's history to have their first two singles both reach the peak position.[8] Macklemore and Lewis released their debut studio album The Heist on October 9, 2012, which charted at number 2 on the U.S. Billboard 200. The pair won four Grammy Awards at the 2014 ceremony, including Best New Artist, Best Rap Album (The Heist), Best Rap Song and Best Rap Performance ("Thrift Shop"). Their second album, This Unruly Mess I've Made, was released on February 26, 2016. In June 2017, he released "Glorious", a single featuring Skylar Grey. This marked his return to the music industry, as well as his first major single produced without Lewis since his mainstream breakthrough. His second solo studio album, Gemini, was released on September 22, 2017.

Ben Haggerty was born to Bill Haggerty and Julie Schott. He is one of two boys and was raised with his brother Tim in Seattle, Washington.[9] He has Irish heritage.[10] Haggerty was six years old when hip hop first came into his life by way of Digital Underground.[11][12] According to a YouTube interview, he listened to "parental advisory" music from the radio when he was an underage youth.[13]

Haggerty was 15 when he started to write lyrics.[11][12] When he started to sing, Haggerty listened to "a lot of East Coast underground hip hop", with Hieroglyphics, Freestyle Fellowship, Aceyalone, Living Legends, Wu-Tang Clan, Mobb Deep, Nas, and Talib Kweli being big influences on him.[13][14] Interested in reaching a younger generation through his music, he was a part of a program focusing on education and cultural identity called "Gateways for Incarcerated Youth" where he facilitated music workshops.[15] Haggerty attended Garfield High School and Nathan Hale High School. At Hale, he developed the stage name "Professor Macklemore" for an art project involving a made-up superhero,[16] and at Garfield, he started a hip-hop group called Elevated Elements with other students. Elevated Elements released an album titled Progress in 2000.[17] Haggerty then went on to earn a bachelor's degree from The Evergreen State College in 2009.[15][18] 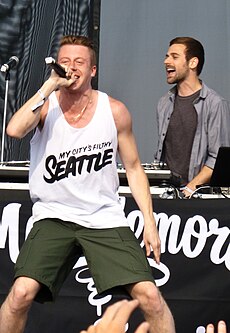 In 2000, Haggerty recorded a mixtape titled Open Your Eyes under the name Professor Macklemore, which he distributed himself and released on October 21, 2000.[19] Haggerty dropped "Professor" from his name and began working on his first official full-length album, called The Language of My World. The album was released on January 1, 2005, with its lead single, "Love Song", being announced the same day. "Love Song" featured singer Evan Roman, produced by Budo, who would later go on to produce several more tracks for Macklemore.

In 2006, Haggerty first met his future collaborator Ryan Lewis.[20] Lewis, who would go on to release two albums with Haggerty as Macklemore & Ryan Lewis, spent a few years working on Macklemore's promotion as a photographer. The two musicians would soon become good friends but would not formalize their collaborative efforts until 2009.[13] In the meantime, Macklemore kept busy as a solo artist, appearing on The Physics' song "Good" in 2009,[21] as well as performing at the Seattle major arts and music festival Bumbershoot in 2008, 2009, and 2001.[22]

Macklemore's second mixtape, The Unplanned Mixtape, was released on September 7, 2009. It would later reach No. 7 on the iTunes Hip Hop chart. The mixtape was accompanied by the singles "The Town" and "And We Danced," the latter of which featured singer Ziggy Stardust. "The Town" was later remixed by Sabzi of the Blue Scholars.[23][24]

In 2009, Macklemore and Ryan Lewis formalized the collaboration as a duo Macklemore & Ryan Lewis. They released the EP The VS. EP. They also released "Irish Celebration" in December 2009 in anticipation of the release of The Vs. EP.[25] In March 2010, the duo released "Stay At Home Dad", a track that didn't quite make Vs.[26] In October 2010, they created the VS. Redux EP. Macklemore used his experience with substance abuse to create the mixtape's song "Otherside", which samples the Red Hot Chili Peppers song of the same title.[27][28][29] On April 8, 2011, Macklemore and Ryan Lewis performed the song at the 2011 Mariners Opening Day in-front of a sold-out crowd of nearly 48,000 attendees.[30][31][32] "Wings" was released on January 21, 2011, followed by "Can't Hold Us" featuring Ray Dalton on August 16, 2011. In February 2011, Macklemore and producer Ryan Lewis kicked off a multi-city tour in Seattle, Washington, which included three sold-out shows at Showbox at the Market, a Seattle music venue.[33] That same year, the rapper appeared at many U.S. music festivals, including Bumbershoot, Outside Lands, Lollapalooza, Rock the Bells, SoundSet, Sasquatch, and Bonnaroo. 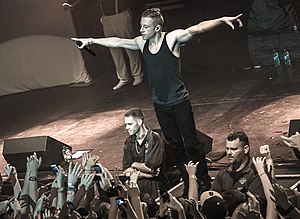 Macklemore performing at The Heist Tour, in 2012

Their album The Heist was released in October 2012 and debuted on the U.S. Billboard 200 at number 2 of the week dated October 27, 2012, selling over 78,000 copies. "Same Love" was released on July 18, 2012 and after "White Walls". In January 2013, Music Choice featured Macklemore in the brand new series "Primed", which focuses on emerging artists. In May 2013, Haggerty was featured on Clinton Sparks's single "Gold Rush", along with 2 Chainz and D.A.[34] The Heist World Tour began in August 2012 to promote The Heist.[35] In January 2015, Macklemore announced via Twitter that his third studio album would be released sometime in the second half of that year.[36] Despite this, the album was not released until February 26, 2016. On August 5, 2015, Macklemore released a song for free download titled "Growing Up (Sloane's Song)," which features Ed Sheeran.[37] On August 27, 2015, he released a new song called "Downtown" which features Foxy Shazam vocalist Eric Nally, Kool Moe Dee, Melle Mel, and Grandmaster Caz, which he performed at the 2015 MTV Video Music Awards on August 30.[38] On his first tour in two years, An Evening with Macklemore and Ryan Lewis, Macklemore announced that his new album was finished and ready for release.

On October 1, Macklemore performed "Same Love" in a set at the opening of the Grand Final of the National Rugby League in Sydney, Australia — something that was considered by some to be controversial in the middle of a national survey on same sex marriage.[45] Macklemore stated that it was one of his best performances due to the circumstances and thanked the fans in Sydney for the reception that he received throughout. 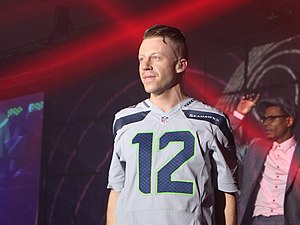 He became engaged to his girlfriend of seven years, Tricia Davis, on January 21, 2013.[49] On January 3, 2015, he announced on Twitter that he and his fiancée were expecting their first child that May.[50] After the release of "Growing Up (Sloane's Song)", which featured English singer-songwriter Ed Sheeran, the couple announced that their daughter, Sloane Ava Simone Haggerty,[51] had been born on May 29.[52] Following the birth of Sloane, they married on June 27, 2015.[53] In September 2017, the couple announced that they were expecting their second child.[54] On April 3, 2018, Macklemore announced during a performance at the 3Arena that his wife had given birth to their second daughter. He did not tell the crowd her name.

Macklemore voiced his support of LGBT rights and same-sex marriage in the song "Same Love", which also condemns homophobia in mainstream hip-hop, society, and mass media.[55]

In August 2008, Macklemore admitted himself into rehab for drug addiction and alcoholism,[56][57] and celebrated three years of sobriety before a brief relapse in 2011, which he describes in his song "Starting Over".[58] He said in a 2012 documentary that he spent most of his twenties trying to combat his addictions and destructive way of life, saying "I want to be someone who is respected and not just in terms of my music. I want to be respected in terms of the way that I treat people... Music is my creative outlet in terms of expressing what is important to me; what has importance, what has a value. And I want to be respected for that."[20] On September 29, 2018, Macklemore headlined Recovery Fest in Pawtucket, Rhode Island.[59] Recovery Fest was formed to have a drug and alcohol-free concert and support charities that worked with combating opioid addiction.[60]

Macklemore dedicated his song "My Oh My" to sportscaster Dave Niehaus, who died in November 2010, with a performance before 50,000 fans who attended the 2011 Mariners Opening Day at Safeco Field.[61] Following the performance, Macklemore and Ryan Lewis were each awarded a custom jersey embedded with a Mariners patch. Ryan Lewis announced that all proceeds from the song benefit the Rainier Vista Boys and Girls Club.[62] Macklemore is also a fan of the Seattle Seahawks and created a 12th Man promotional video as well as performed at the 2014 NFC Championship game in Seattle. Macklemore is still a fan of the now-relocated Seattle SuperSonics, as he can be seen sporting a Sonics jersey at times.[63][64][65] Macklemore also has an eclectic taste in art, including outlandish garments spouting sequins, fringe and feathers, a kitschy velvet painting of a bald eagle, an oil painting of Drake dancing and a Dan Lacey painting of a nude Justin Bieber.[66][67][68]

On May 14, 2016, Macklemore appeared in Barack Obama's weekly address to talk about the dangers of addiction to opioids and prescription painkillers.[69] Macklemore talked about his own experiences with abuse of painkillers, stating "When you’re going through it, it’s hard to imagine anything being worse than addiction. But the shame and stigma associated with the disease keeps too many people from seeking the help they actually need. Addiction isn’t a personal choice or a personal failure."[70][71]

On May 16, 2019, Macklemore will be honored with the Stevie Ray Vaughan Award from MusiCares, in recognition of his dedication to and support of MusiCares and his commitment to helping others in the addiction recovery process.[73]

Share
Retrieved from "https://en.everybodywiki.com/index.php?title=Macklemore&oldid=386720"
Categories:
Hidden categories:
This page was last edited on 24 April 2019, at 17:03.
Content is available under License CC BY-SA 3.0 unless otherwise noted.
This page has been accessed 1,479 times.
Privacy policy
About EverybodyWiki Bios & Wiki
Disclaimers