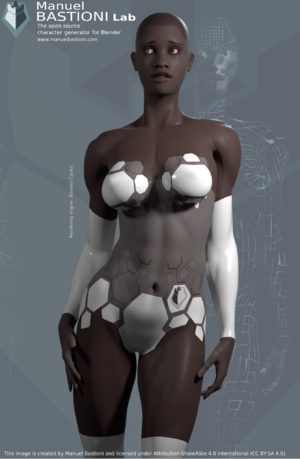 3d character modelled in Blender with the plug-in ManuelbastioniLAB 1.5.0

MB-Lab (previously ManuelbastioniLAB) is a free and open-source plug-in for Blender for the parametric 3D modeling of photorealistic humanoid characters.[1]

It was developed by the artist and programmer Manuel Bastioni.[lower-alpha 1], and was based on his over 15 year experience of 3D graphic projects.[2]

Bastioni withdrew support for the project but it has continued as a community project under the MB-Lab name.[1][3][4]

The plugin is completely integrated in Blender. The GUI is designed to be self-explanatory and intuitive and when possible the features are designed to work with one click.

Over 90% of the character is defined with only three sliders that control age (from 18 to 80 y.o.), body mass and body tone. The character is finished with other lab tools for body and face details, poses, skin and eye shaders, animation, poses, proxy, etc.

The software is designed as a laboratory[5] in constant evolution and includes both consolidated algorithms as the 3D morphing and experimental technologies, as the fuzzy mathematics used to handle the relations between human parameters, the non-linear interpolation[6] used to define the age, mass and tone, the auto-modelling engine based on body proportions and the expert system used to recognize the bones in motion capture skeletons.[7]

The software is written in Python and works on all the platforms supported by Blender: Windows, macOS and Linux.

All the characters use the same standard skeleton, so the poses and animation can be easily moved from a character to another.

Most of the data distributed in the package is stored using the standard json syntax.

The characters generated with ManuelbastioniLAB are released under double license:

A comparison between the results of the age algorithm. The image also shows the skin shader and the wrinkle map that is automatically created by the ManuelbastioniLAB.

ManuelbastionLAB provides two different base meshes for male and female models. Each model respects the fundamental requisites of a professional mesh, as defined by the author:[9]

The base humans are modelled after accurate studies of anatomy and anthropology. The lab 1.5.0 provides about 470 morphs for each human character, designed to parametrically describe most of the anatomical range in human bodies, faces and expressions. Genitalia are not present.

Concerning ManuelbastionLAB, the word phenotype is intended with the following meaning:

A "phenotype" defines merely the physical appearance of a class of characters, it is not related to politics, culture, language and history. It's used to describe the variations of human traits in relation to the evolution in a specific geographical area. ManuelbastioniLAB supports most of the common human phenotypes to the extent of volumetric modelling features. [10]

The lab provides three main classes of humans: Caucasian, Asian and Afro. For each class there is a specific set of phenotypes. Each phenotype can be loaded from the library and used as base for a custom character, or mixed with another phenotype. The available phenotypes are:

While the lab is aimed to create realistic 3d human beings based on a scientific description of their parameters, the same technology can be successfully applied to non-human characters, like fantasy creatures.

The version 1.5.0 of the lab supports three variety of anime characters: classic shojo, modern shojo and "realistic style" anime. There are also male and female elves and male dwarf. Each model has a separate set of morphs to create millions of variations.

Concerning the creation of fantasy characters, the lab supports some extra parameters for humans too, like pointed ears, special teeth, etc..

While Makehuman has similar characteristics to MB-Lab the former is a stand-alone application and requires export and import and import to Blender (software) which is not necessary with MB-Lab.[11][12]

The project has been discontinued abruptly by Bastioni,[13] after the release 1.6.1a, which was not compatible with Blender 2.80.[citation needed] Bart Veldhhuzien indicates Bastoni attempted unsuccessfully to raise funds and then chose move quoting Bastoni as saying: "I’m sorry, I did my best, but I cannot continue the development of the lab. I will use Blender as artist, since Blender and its community are part of my life."; and "I realized that the lab community size is not enough to support a so expensive project".[13]

In December 2018, a new repository, based on last Bastioni's version (1.6.1a), aiming at Blender 2.80 compatibility, has been opened on GitHub with project name MB-Lab.[3]

Retrieved from "https://en.everybodywiki.com/index.php?title=ManuelbastioniLAB&oldid=928591"
Categories:
Hidden categories:
This page was last edited on 7 August 2020, at 01:23.
This page has been accessed 549 times.
Content is available under License CC BY-SA 3.0 unless otherwise noted.
Privacy policy
About EverybodyWiki Bios & Wiki
Disclaimers