Maringá (Portuguese pronunciation: [mɐɾĩˈɡa]) is a municipality in southern Brazil founded on 10 May 1947 as a planned urban area. It is the third largest city in the state of Paraná, with 385,753 inhabitants in the city proper, and 764,906 in the metropolitan area (IBGE 2013). Located in northwestern Paraná, and crossed by the Tropic of Capricorn, it is a regional centre for commerce, services, agro-industries, and universities, including the State University of Maringá.

Maringá takes its name from a song by Joubert de Carvalho in honour of his great love, Maria do Ingá, later shortened to Maringá. As a result, the city is nicknamed "Song City".[1] At the time the settlement was established, the song was very popular in the media.[2]

In 1925, the Northern Paraná Land Company was established in London, England and was responsible for the management of more than 500,000 acres (2,000 km2) in the northern part of the State, which today contains some of the largest cities in Paraná.

The region's fertile land encouraged São Paulo colonists to move in and acquire new areas for production of coffee beans, an important product for exportation. The northern region of Paraná encloses nearly 100 thousand km². It is watered by the Rivers Paranapanema, Paraná, Ivaí and Piquiri. The urban project requested by the British Company Improvements North of the Paraná (Melhoramentos Co.) and elaborated by the city planner Jorge Macedo Vieira, defined the outlines of the new city. Maringá received the status of municipality on 14 November 1951.

The Company, worried about deforestation proceeding from the occupation foreseen in the urbanistics projects, reserved three great ecological areas within the urban limits: the Forest Horto, the Park of the Ingá and Forest II and the city was planned as a "garden city" from the beginning.[3]

The Tropic of Capricorn runs through Maringa

Maringá experiences a tropical climate bordering on a humid subtropical climate. It has well distributed rainfall, where the average temperature of the coldest month is around 17.8 °C (64 °F) and average annual temperatures around 21.95 °C (71.51 °F). Because of its location, situated in southern Brazil and crossed by the Tropic of Capricorn, the region of Maringá is influenced by several macro-climatic factors caused by migration of air masses from the Atlantic Ocean and from the Tropical zone. In the winter the infiltration of cold air from the polar front is relatively common, and frosts can occur.

The city, planned from its inception, offers an enviable flora. Maringá is considered[by whom?] one of the greenest cities in the world.

Maringá has a high rate of concentration of green area per capita, there are 90 acres (360,000 m2) of native forest on 17 preserved areas.

The city preserves within its limits large areas of native forest in the Horto Florestal, Parque dos Pioneiros (Bosque II) and Parque do Inga, this being open to the public. It also includes smaller preserved areas as the Parque do Cinquentenário, private areas and so on.

Throughout the year it is possible to observe its tree-lined streets that produce a good air to breathe, but especially in the passage from winter to spring, many trees explode in flowers.

Maringá has one of the highest concentration rates of green area, 26.65 m² per inhabitant, 90 bushels of native forest in 17 forests.

Even with the normal problems of urban centers, Maringá preserves its reputation as a green city, ecologically well cared for. Its origin had planning, urban planning - forest reserves, central construction site, wide avenues, several species of trees that follow a Master Plan

Proportionally, Maringá has one of the largest fleets per capita of vehicles of Paraná State. Because of it, there are some places of the city with pollution levels above the recommended. Two regions in the city are the biggest problems, they are the avenue Duque de Caxias and Colombo. Industries, pesticides, noise pollution and household waste, also contribute very significantly to the pollution of the city. In spite of this, Maringá still preserves a reputation of green city.

Maringá is highlighted today by the commercial sector and service delivery. The service sector is Maringá's largest (76,74%), followed by industrial (22,29%) and farming (0,97%). Within industry, the food-processing, chemical and textile sectors predominate.

The agriculture still is fundamental for Maringá, although its importance has declined in recent years. Farming is diversified, and besides coffee, today are produced corn, wheat, cotton, ramie, beans, peanuts, rice, sugar cane, and especially soybeans.

Among the various segments in the industrial sector of Maringá, there are metal-mechanics, agribusiness, textile and food companies. The industrial sector is not as expressive as agriculture, but it's growing. The city has a growing fleet that handles weaving and agribusiness, but mostly clothing. Big industries such as Cocamar, Coca-Cola, Noma, among others, foster job creation in the region, and even other cities. Metalworking industries serving the entire country and also exports to countries in Latin America a very large range of products. Maringá is the fashion hub in the south of Brazil, with the largest wholesale mall in Latin America, the Mercosul. Recently, Maringá also has been highlighted in the software market, with a consolidated APL (Local Productive Arrangements).

Maringá has five shopping malls: Avenida Center Mall, Cidade Mall, Mandacaru Boulevard Mall, Maringá Park Mall (formerly Aspen Park Mall) and Catuaí Maringá Mall, this is the second largest shopping mall in the State of Paraná (behind only Londrina Catuaí Mall). The commercial vocation of Maringá can be proven by dynamism and variety of items offered by companies from the sectors of food products, pharmaceuticals, clothing, appliances, fittings, bookstores, restaurants, snack bars. And for being a polo wholesaler, commodity prices are also competitive. These factors combine to attract consumers from different regions of Paraná, southwest of São Paulo and some cities in Mato Grosso and Mato Grosso do Sul. The companies act in at least seven segments of the wholesale market: food, dry goods and offal, paper, glass, textiles, wood, auto parts and appliances. Not to mention the many garment industries, which basically sell them at wholesale. The city houses the Maringa and Region Convention & Visitors Bureau, an organization of character and independent nonprofit whose goal is to develop the regional economy by encouraging tourism events. Established and maintained by public and private initiatives related to tourism and events industry, it is responsible for planned development of the same, including the city effectively in the national and international tourist circuits.

Distribution of the population living in Maringá according to skin color: 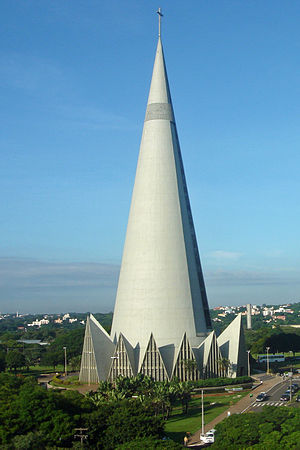 The Cathedral of Maringá, the city's most famous landmark, was completed in 1972. At 124 meters, it is the tallest church building in South America.

Maringá is a city where most people are Catholic, but there are other religious denominations in the city, such as Baptists, Pentecoastal, Muslims, Buddhists, Shintoists, Kardecists, and others. Although Catholics are the majority, they have remained stagnant, while Protestants have grown 2.41% and the number of people lacking religion fell to 2.03%.

Maringá currently has two professional football clubs, Grêmio Maringá and Maringá FC, the first play in the 2nd division of the Paranaense Championship and the second play in the 1st division of the Paranaense Championship. Both play their games at the Stadium Willie Davids, with a capacity up to 15,300 fans. The most traditional club is Grêmio Maringá, who has won three State Championships, and has been four times with the vice-championship. Meanwhile, Maringá FC never won titles.

Among several private faculties, the ones that usually stand out in terms of number of undergraduates and graduates are:

Maringá is twinned with:[7]

Notable people from Maringá include:

Retrieved from "https://en.everybodywiki.com/index.php?title=Maringá&oldid=990067"
Categories:
Hidden categories:
This page was last edited on 29 August 2020, at 02:28.
This page has been accessed 64 times.
Content is available under License CC BY-SA 3.0 unless otherwise noted.
Privacy policy
About EverybodyWiki Bios & Wiki
Disclaimers
Mobile view