listen)[3]) is one of the 26 states of Brazil, in the south of the country, bordered on the north by São Paulo state, on the east by the Atlantic Ocean, on the south by Santa Catarina state and the province of Misiones, Argentina, and on the west by Mato Grosso do Sul and Paraguay, with the Paraná River as its western boundary line.[4]

Its area is 199,307.9 km2 (76,953.2 sq mi), and it is subdivided into 399 municipalities. Its capital is the city of Curitiba. Other major cities are Londrina, Maringá, Ponta Grossa, Cascavel, São José dos Pinhais and Foz do Iguaçu.

Crossed by the Tropic of Capricorn, Paraná has what is left of the araucaria forest, one of the most important subtropical forests in the world. At the border with Argentina is the National Park of Iguaçu, considered by UNESCO as a World Heritage site. At only 40 km (25 mi) from there, at the border with Paraguay, the largest dam in the world was built, the Hidroelétrica de Itaipu (Itaipu Hydroelectric Dam). The crime rate is considered low by Brazilian standards[5] and the state is one of the most developed ones in the nation,[6] ranking 4th in gross domestic product, only behind the states of Rio de Janeiro, São Paulo and Minas Gerais.[7]

Before the discovery of the region by European explorers, indigenous populations inhabited the region for thousands of years. This included the Carijó in the lands closer to the sea, from the Tupi group, and the Caingangues in the interior, who belonged to the Jê group.[8]

Colonisation of the state by settlers started in the 16th century, but was mainly confined to the coasts. Being a region mostly abandoned by the Portuguese,[9] the region was explored by other European countries, who searched primarily for Pau brasil.[9] The most noteworthy presence was that of the Spanish, which brought with them jesuits. Soon, Jesuit reductions were opened in the western and south-western parts of the state, whose territory largely belonged to the Spanish crown. In 1554, Domingo Martínez de Irala founded the town of Ontiveros, one league away from the Guaíra Falls.[10] 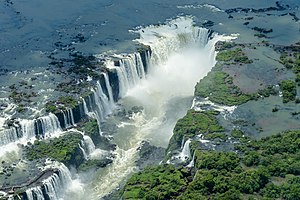 Paraná is bounded on the north by São Paulo state, on the east by the Atlantic Ocean, on the south by Santa Catarina state and the Misiones Province of Argentina, and on the west by Mato Grosso do Sul and the republic of Paraguay, with the Paraná River as its western boundary line.

The state can be separated into five main topographic areas, from east to west: a coastal zone, the mountains of Serra do Mar, and then three plateaus, each lower than the other, until the Paraná River is reached.[12] 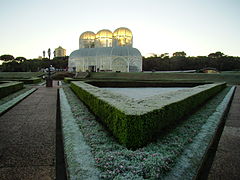 Frost at Botanical Garden of Curitiba

According to the Köppen climate classification, the north and west of the state, and the east coast, is of the Cfa climate type, with the remainder being Cfb.[13] An alternative analysis using the ECMWF model indicates that the Aw and Cwa Köppen types appear in the north.[14] The northern part of the state is the convergence point between the Tropical Atlantic and Equatorial Continental air masses.[15]

The annual mean air temperature ranges between 15 and 24°, with the highest temperatures found in the northwest and the lowest around Palmas,[14] which is considered the coldest city of Paraná by the meteorological body Simepar.[16] In the coastal plain minimum average temperatures range between 16–18 °C.[17]

Precipitation is less than 1200 mm a year in the north of the state, rising to above 1800 mm in the southwest and southeast of the state.[14]

The Cfa climate, subtropical with good distribution of annual rainfall and hot summers, occurs in the coastal plain and western parts of the state. Average temperature is 19 °C (66 °F), with rainfall of 1,500 millimetres (59.1 in) per year.[18]

The Cfb climate, warm to hot temperate with good distribution of annual rainfall and mild summers, occurs at higher elevationu. The average annual temperatures are 17 °C (63 °F) and rainfall of 1,200 millimetres (47.2 in) per year.[18]

The Cwa climate, subtropical with hot summers and dry winters, has occurred in the north-western part of the state territory. It is what is called a tropical climate, because in contrast to the two described above, whose good distribution of rainfall is registered throughout the year, this has characteristic rainy index of tropical systems, with dry winters and wet summers. The thermal medium per year varies around 20 °C (68 °F) and the wet content amounts to 1 millimetre (0.0 in) to 300 millimetres (11.8 in) per year. Almost the entire state territory is subject to a great number of frost per year.[18] Cities with this climate include Paranavaí (according with Maack) with some characteristics - Cfa(h), transition with a humid climate all year round.[19]

Parana is the sixth most populous state in Brazil. Its level of urbanization is 83.5%.[21]

Mill in the Dutch colony of Castrolanda

Parana's white population is primarily descendant of Portuguese, Italian, Polish and Ukrainian immigrants, but many German families also settled in the state.[23] A variation of German known as Paraná-Wolga-Deutsch originated in the area.[24]

Initially settled by the Guarani and Kaingang Amerindians, until the 17th century, virtually no European presence existed in Paraná. The number of settlers grew around 1750 and the population was composed of Amerindians, Portuguese, and some Spaniards. African slaves from Angola and Mozambique were also present, but in fewer numbers than in other Brazilian areas, because Paraná was an unexplored region that did not need much slave manpower. As part of the province of São Paulo, immigration grew in the mid-19th century, mostly composed of Italian, German, Polish, Ukrainian, and Japanese peoples. While large numbers of Poles and Ukrainians are present in Paraná, their presence in the rest of Brazil is relatively small, especially Ukrainians. In the early 20th century, two waves of migration to Paraná occurred: one coming from the north, mostly of Portuguese, but also of African and Amerindian origin, and another from southern Brazil to the southwest and west, mostly of Portuguese, Italian, and German origins.[25][26]

The main economic activities are agriculture (sugarcane, maize, soybeans, coffee, tomato), industry (agribusiness, automotive, and paper) and plant extraction (wood and yerba mate).[29] Despite the good social indicators and high standard of living, unemployment is still a problem and the state is one of most difficult for foreigners trying to find jobs.[30]

Two of the biggest football sides in the state are Clube Atlético Paranaense and Coritiba Foot Ball Club, who play the Atletiba derby.[31] Curitiba was one of the 12 host cities of the 2014 FIFA World Cup.

Retrieved from "https://en.everybodywiki.com/index.php?title=Paraná_(state)&oldid=828796"
Categories:
Hidden categories:
This page was last edited on 28 June 2020, at 02:06.
This page has been accessed 82 times.
Content is available under License CC BY-SA 3.0 unless otherwise noted.
Privacy policy
About EverybodyWiki Bios & Wiki
Disclaimers
Mobile view