From EverybodyWiki Bios & Wiki
Jump to:navigation, search
The correct title of this article is #MeToo. The substitution of the # is due to technical restrictions.
This article is about the movement against sexual harassment. For other uses, see Me Too (disambiguation).

"Me Too" (or "#MeToo", with local alternatives in other languages) spread virally as a two-word hashtag used on social media in October 2017 to denounce sexual assault and harassment, in the wake of sexual misconduct allegations against film producer and executive Harvey Weinstein.[1][2][3] The phrase, long used in this sense by social activist Tarana Burke, was popularized by actress Alyssa Milano, who encouraged women to tweet it to publicize experiences to demonstrate the widespread nature of misogynistic behavior.[4][5] Since then, millions of people have used the hashtag to come forward with their experiences, including many celebrities.[6][7] 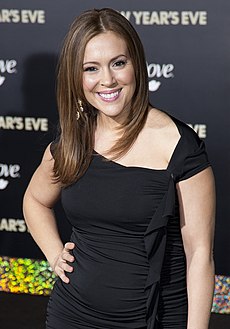 Alyssa Milano encouraged use of the hashtag after accusations against Harvey Weinstein surfaced in 2017.

Social activist and community organizer Tarana Burke created the phrase "Me Too" on the MySpace social network[8] in 2006 as part of a grassroots campaign to promote "empowerment through empathy" among women of color who have experienced sexual abuse, particularly within underprivileged communities.[4][9][10][11][12] Burke, who is creating a documentary titled Me Too, has said she was inspired to use the phrase after being unable to respond to a 13-year-old girl who confided to her that she had been sexually assaulted. Burke later wished she had simply told the girl, "me too".[8]

On October 15, 2017, actress Alyssa Milano encouraged spreading the phrase as part of an awareness campaign to show the scale and ubiquity of the problem, tweeting: "If all the women who have been sexually harassed or assaulted wrote 'Me too.' as a status, we might give people a sense of the magnitude of the problem."[13][14][15][6][4] Milano later attributed the phrase to Burke, calling Burke's story "heartwarming and inspiring".[8]

Tens of thousands of women replied to Milano's tweet, including:[18]

Some men, such as actors Terry Crews[42] and James Van Der Beek,[43] have responded to the hashtag with their own experiences of harassment and abuse, while others have responded by acknowledging past behaviors against women, spawning the hashtag "HowIWillChange."[13] The hashtag "HimThough" was coined by Elizabeth Plank.[44]

In addition to Hollywood, "Me Too" declarations elicited discussion of sexual harassment and abuse in the music industry,[23] sciences,[45] academia,[46] and politics.[47] In the music industry, the band Veruca Salt used the #MeToo hashtag to air allegations of sexual harassment against James Toback,[48] and Alice Glass used the hashtag to share a history of alleged sexual assault and other abuses by former Crystal Castles bandmate Ethan Kath.[49][50]

Statehouses in California, Illinois, Oregon, and Rhode Island responded to allegations of sexual harassment surfaced by the campaign,[51] and several women in politics spoke out about their experiences of sexual harassment, including United States Senators Heidi Heitkamp, Mazie Hirono, Claire McCaskill and Elizabeth Warren.[47] Congresswoman Jackie Speier has introduced a bill aimed at making sexual harassment complaints easier to report on Capitol Hill.[52]

On November 12, 2017 in Hollywood, a few hundred men, women, and children participated in the "Take Back the Workplace March" and the "#MeToo Survivors March" to protest sexual abuse.[53]

On November 16, 2017, US Senator Kirsten Gillibrand of New York specifically referred to "the 'Me Too' Movement" when asked about allegations of sexual misconduct by politicians such as President Donald Trump, former President Bill Clinton, Senator Al Franken of Minnesota, and Roy Moore.[54]

On November 23, 2017, actress Uma Thurman posted a Thanksgiving Day message on her Instagram account accompanied by the #MeToo hashtag. She wrote, "I said I was angry recently, and I have a few reasons, #metoo, in case you couldn’t tell by the look on my face."[55]

The hashtag has trended in at least 85 countries,[56] including India, Pakistan, and the United Kingdom. Variants of the phrase trended in France,[16] using "BalanceTonPorc" (DenounceYourPig),[57] which encouraged users to share the names of their alleged abusers.[58] In the Philippines men and women shared their harrowing experiences with their offenders.[59] In Italy, women posted stories of assault and harassment under the hashtag #QuellaVoltaChe translated literally into "#TheTimeThat."[60][61] The Spanish-language counterpart is "#YoTambién". In French-speaking parts of Canada, the campaign is done under the hashtag "#MoiAussi". In Israel, the Hebrew hashtag "גםאנחנו#" (#UsToo) began trending on October 18, with a front page spread in the newspaper Yediot Aharonot.[57] In Sweden, several women used the hashtag to confront television presenter Martin Timell[62], whose shows on TV4 were cancelled on October 20, 2017,[63][64] and journalist Fredrik Virtanen's[65] alleged abuse towards them.

The European Parliament convened a session directly in response to the Me Too campaign, after it gave rise to allegations of abuse in Parliament and in the European Union's offices in Brussels. Cecilia Malmstrom, the European Commissioner for Trade, specifically cited the hashtag as the reason the meeting had been convened.[66] In the UK, the Cabinet Office has launched an investigation in allegations that Parliament member Mark Garnier ordered a secretary to buy sex toys for his wife and mistress.[67]

In China, the websphere reacted in anger following the media claims that harassment was a foreign problem, claiming Chinese men to be educated as protective.[68]

In Hong Kong, track and field athlete Vera Lui Lai-Yiu posted her own case of sex abuse with the hashtag on her Facebook fanpage on her 23rd birthday. She decided to reveal the case after similar action by the gymnast McKayla Maroney. Lui specifically used the "#metoo" hashtag and posted a picture of herself holding a piece of paper with the handwritten words "#metoo lly" (her initials).[69][70][71][72][73]

The hashtag has been criticized for putting the responsibility of publicizing sexual harassment and abuse on those who experienced it, which could be re-traumatizing.[75][76][77][78] Some found the hashtag to inspire fatigue and outrage, rather than emotionally dense communication.[79][80] Burke had initially criticized the movement for ignoring the work of black women in creating dialogue addressing sexual assault. However, she did salute those who partook in the movement and credited Milano for acknowledging Burke's own similar movement.[9]

Other articles of the topics Internet AND Sexuality : You Know Me Movement

Share
Retrieved from "https://en.everybodywiki.com/index.php?title=Me_Too_(hashtag)&oldid=672475"
Categories:
Hidden categories:
This page was last edited on 9 December 2017, at 02:09.
Content is available under License CC BY-SA 3.0 unless otherwise noted.
This page has been accessed 1,191 times.
Privacy policy
About EverybodyWiki Bios & Wiki
Disclaimers