Mere Oblivion is a 2007 short comedy-drama film, written and directed by Burleigh Smith. It features Smith and Elizabeth Caiacob. The film premiered at Tropfest, the world's largest short film festival.[1]

Kenny Bunkport gets more than he bargains for the night he takes his elderly grandmother out to dinner.

Kenny, a librarian in his twenties, reflects on old age and how the elderly all look the same to him. He tells of the night he takes his grandmother to dinner, hurriedly collecting Robyn from her nursing home and rushing her by taxi to an upmarket restaurant. Once seated, Robyn makes Kenny uncomfortable by interrogating him and lecturing him on his love life. She eventually reveals she is not his grandmother at all, but his grandmother's next door neighbour, and has been playing him all night. Shocked, Kenny rushes back to the nursing home for his real grandmother and can only offer her dinner at a fast food chain.

The style of the film is inspired by the work of Woody Allen, from the opening titles to the direct address to camera, the bespectacled protagonist to the offbeat humour.

The film's title is derived from the monologue, All the World's a Stage, in William Shakespeare's As You Like It:

The film was Smith's acting debut. Thelma Lumsden withdrew from the project during rehearsals. Due to Elizabeth Caiacob's limited availability, Maggie Anketell played Robyn in some scenes.

Mere Oblivion was originally shot on 16 mm film but technical problems saw the film damaged and it was re-shot on HDV to meet the Tropfest deadline.[citation needed] 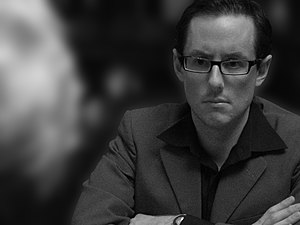 The film was selected from over 600 entries to screen at Tropfest, the world's largest short film festival.[3]

Discussing the film for Empire magazine, Oscar Hillerstrom wrote "Melange of stylistic influences leads to a black and white story about a man and his grandmother. Not quite funny, with sharp, truthful barbs."[6]

Simon Sellars wrote "Mere Oblivion is merely snide, just a cheap excuse to take pot-shots at immigrants and old people; yes, the central character is blind to the feelings of those around him, but the immigrant and the old woman in the film are unlovable, too, so you're left hating them all."[7]

The film was distributed on DVD by the Sydney Morning Herald and The Age. It screened on national television on the Nine Network and later the ABC.[8]

Retrieved from "https://en.everybodywiki.com/index.php?title=Mere_Oblivion&oldid=1142108"
Categories:
Hidden categories:
This page was last edited on 23 November 2020, at 17:03.
This page has been accessed 124 times.
Content is available under License CC BY-SA 3.0 unless otherwise noted.
Privacy policy
About EverybodyWiki Bios & Wiki
Disclaimers