From EverybodyWiki Bios & Wiki
Jump to:navigation, search
This article is about a fictional city in DC Comics. For other uses, see Midway City (disambiguation).

Midway City is a fictional city in the DC Universe, the shared universe of comic book titles published by DC Comics. Midway City is always shown to be a city of the Midwestern United States, based loosely on the real world city of Chicago, Illinois (though Chicago also exists in the DCU). In an "Ask the Answer Man" column printed in Detective Comics #470 (June 1977), writer Bob Rozakis stated that Midway City was in Michigan, near Sault Ste. Marie. This statement has since been reasserted in assorted official[1] and licensed[2] publications. Previously, some writers stated it is in Illinois.

Midway City is most famous for once being the home of the Silver Age Hawkman and Hawkgirl. In current continuity, the Golden Age Hawkman, in his secret identity of Carter Hall, used to be the curator of the Midway City Museum. Along with the current Hawkgirl, Hawkman currently resides in St. Roch, Louisiana.

One of the many incarnations of the superhero team Doom Patrol spent much time working out of a Midway City brownstone. They rarely met Hawkman and Hawkwoman. The Doom Patrol later moved to Kansas City, Missouri, early in volume 2 of its series during Paul Kupperberg's tenure as its writer.

Midway is described as hosting a "division" of the Science Police.[3]

During the event Final Crisis, Midway City is devastated,[4] with evidence of infiltration by forces from Apokolips. Restoration efforts are impeded by Rising Sun, a Japanese superhero, who is suffering from mental trauma and kills many of the workers.[5]

Much later Midway City is devastated by a phenomenon that turns its citizens into super-powered rage-maddened killers. Much of the city is destroyed. Thousands end up dead.[6]

The Midway City Museum is one of the nation's largest museums of natural history. It is particularly noted for its extensive collection of Egyptian artifacts and medieval weaponry. One of the museum's earlier curators was Ed Emmet, the brother of Midway City police commissioner George Emmet. When Ed retired, George used his influence to allow Thanagarian police officers Katar and Shayera Hol the opportunity to take his place. Assuming the anglicised names Carter and Shiera Hall, they became the museum's new curators. One of the Museum's most famed matrons was the naturalist Mavis Trent. Upon meeting Carter, Mavis became instantly smitten with him and persistently tried to seduce him despite the fact that he's married. Mavis' press agent was Joe Tracy, who was secretly in love with her, and frequently visited the museum on Mavis' behalf. 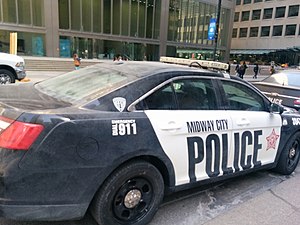 Midway City police car on the set of Suicide Squad in Toronto, Canada.

Midway City was used as one of the settings in the 2016 film Suicide Squad as part of the DC Extended Universe. In the movie, Enchantress takes the city as her headquarters, turning the some of the population and military responders into mindless monsters under her command while she performs a ritual that will ultimately exterminate mankind. The rest of the city is evacuated as the military chooses to send in Amanda Waller's Task Force X.

Share
Retrieved from "https://en.everybodywiki.com/index.php?title=Midway_City_(DC_Comics)&oldid=933236"
Categories:
Hidden category:
This page was last edited on 8 August 2020, at 16:16.
Content is available under License CC BY-SA 3.0 unless otherwise noted.
This page has been accessed 1,327 times.
Privacy policy
About EverybodyWiki Bios & Wiki
Disclaimers