Mike Ehrmantraut is a fictional character in Breaking Bad and Better Call Saul[1], played by Jonathan Banks. Mike is a former Philadelphia police officer who works for Gus—and, on occasion, Saul—as a private investigator, head of security, cleaner, and hit man. His reasons for leaving the force in Philadelphia are never specified during the Breaking Bad series.

Given his "half measures" story to Walt about missing a chance to kill an abusive perp who eventually murdered a victim Mike was trying to help, and Hank's refusal to bring up the reason of Mike's discharge from the police force during an interrogation, it is implied that Mike decided to take revenge against the abusive perp which resulted in his departure from law enforcement. As such, one of the lessons Mike employed in his day-to-day business activities was to not take "half measures." However, the prequel series Better Call Saul revealed that Mike, a crooked cop himself, murdered two other crooked cops who had killed his honest police officer son Matt, who had hesitated to involve himself in any corrupt activities. The next day he fled to Albuquerque to work as a parking attendant at the Albuquerque Courthouse circa 2002 and to be close to his beloved granddaughter Kaylee (played by Kaija Roze Bales), who had been previously relocated there by her widowed mother Stacy. Mike is a calm and calculating individual who efficiently performed his duties for Gus, using his extensive knowledge to do so without detection. He is never shown to target or involve any innocent bystanders in his duties. 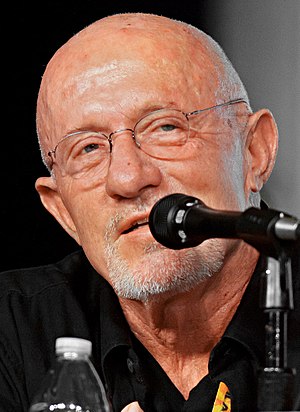 Mike first appears after he is sent to remove all evidence of drugs from Jesse's apartment and to coach him on how to interact with authorities after Jesse wakes from his heroin-induced sleep to find his girlfriend Jane dead, having choked on her own vomit.

Mike is hired by Saul to spy on Skyler White, when two dangerous looking cousins of Tuco Salamanca show up to murder Walt. Mike immediately calls Gus to get him to stop the cousins from murdering Walt. As the cousins are ready to murder Walt, Gus sends them a message saying; Pollos. Mike is later hired by Gus to protect Gale from Walt after Gus wants Walt dead since Gale knew Walt's meth formula. However, this is unsuccessful as Jesse shoots Gale dead at Walt's orders in order to save Walt.

In the aftermath of Gale's murder, Victor finds Jesse in shock sitting in his car but, while Jesse was unobserved at the crime scene by neighbors, Victor was seen and acted very suspiciously to many of the onlookers. Forcing Jesse back to the lab at gunpoint, an enraged Victor informs Mike of Gale's death and of his being noticed at the crime scene. Walt asks Mike to allow him to cook, since Gus will be even angrier if they fall further behind on production. Victor dons a gas mask and informs Walt that he knows Walt's exact cooking method from watching him at the lab and Walt had only made his and Jesse's fate worse by murdering Gale. Victor seemingly knows Walt's method, a fact that Walt had never foreseen and is busy cooking when Gustavo Fring enters the lab. Gus calmly and silently descends the stairs and begins to change into a hazmat suit as Walt becomes increasing frantic trying to justify his actions and argue that Victor may know the steps but could never operate such a large and complex lab, problems would invariably arise that only Walt would be able to recognize and cope with. Gus all the while silently changes and now stands directly in front of both Walt and Jesse holding a razor sharp box cutter and, in a gruesome show of force, suddenly grabs and fatally slashes Victor's throat with a box cutter and spraying Walter and Jesse with Victor's blood, staring unemotionally into their eyes as Victor struggles and bleeds to death. Gustavo then redresses in the same manner speaking only once before leaving, saying "get back to work". Walter knows that he has fallen out of favor with Gus and fears that he will eventually be killed. Walter decides to pre-emptively strike against Gus, illegally purchasing from Lawson (Jim Beaver) an untraceable .38 Ruger LCR revolver for the task.

In response to Mike's concerns that Jesse's guilt-ridden recklessness could attract unwanted attention, Gus instructs Mike to take Jesse along as a passenger on a series of seemingly mundane pick-up runs around New Mexico. Aware that Jesse can't be scared into behaving, Gus instead orchestrates a fake robbery for Jesse to foil, thereby boosting his loyalty and self-esteem. Later, Jesse helps Mike retrieve stolen meth from a pair of junkies. Impressed with Jesse's mettle, Gus deems him ready to take on a greater role in the operation.

In an attempt to defuse tensions with the Cartel, Gus agrees to share Walter's formula. Because he does not trust Walter, Gus and Mike take Jesse to Mexico, where Jesse cooks a batch of "blue sky" in the cartel's own superlab. To Jesse's alarm, Gus seemingly agrees to have Jesse work for the Cartel on a permanent basis. However, during a party celebrating the agreement, Gus kills Don Eladio and the rest of the Cartel's leadership with a poisoned bottle of tequila. To convince Don Eladio and his crew that the tequila is safe, Gus drinks the first shot, having taken capsules that delayed the poison and allowed him to purge. Gus, Jesse, and Mike shoot their way out of Don Eladio's compound. Mike is wounded in the shootout. Jesse drives himself, Gus and Mike to an elaborate medical tent that Gus arranged for in advance. There, Gus is treated by his private doctors and quickly recovers. Mike remains in the medical tent as he is unable to travel.

The fifth season episode "Say My Name" received highly positive reviews from critics with many critics singling out Jonathan Banks and Bryan Cranston for particular praise. The episode is recognized by many critics as one of the best in the series. TV Fanatic's Matt Richenthal gave "Say My Name" a five-star rating, calling it "one of the best in series history."[3] Seth Amitin of IGN gave the episode a 9 out of 10 rating, calling it "mind-blowing", but stating that "I hate to see Mike go out like that. He deserved more. I literally can't give this higher than a 9.0, it was just too sad of an ending."[4] Alan Sepinwall of HitFix thought the episode was "a mostly tremendous episode of a drama", adding the death of Mike "is just a gorgeous, devastating scene", but he was unimpressed by the plotting that led to Mike showing any trust for Walt in that situation, writing that it was a contrived way to ensure that Walt would be in a position to kill Mike per the requirements of the overall show story.[5]

Jonathan Banks has received several awards and nominations for his portrayal as Mike Ehrmantraut in both Breaking Bad and Better Call Saul.