Minetest is an open source sandbox game engine, originally developed by Perttu Ahola, and released in 2010.[1] Minetest includes an inbuilt example game "Minetest Game". This game is inspired by, and has a similar pixelated graphics style to, such games as Minecraft and Infiniminer, and is known for being a FOSS alternative for Minecraft[5], and has received recognition as such from PC Mag.[6] Minetest is available for Linux, FreeBSD, Microsoft Windows, MacOS, and Android. Minetest has been used in educational environments[7][8][9] to teach subjects such as mathematics,[10] programming,[11] and earth sciences.[12]

The main development priority for the Minetest project is to enable a platform for modding. Minetest developers maintain the engine, leaving the development of the mods to their individual maintainers. Community development of Minetest is done mostly through Mods and "Games".

Mods are written in Lua and may add many different elements to the game, including (but not limited to) items, mobs, weather, HUDs, and textures (current available texture packs range from 4x4px to 512x512px[13]).[14][15][16]

Games (originally called "subgames") are collections of mods, along with other files, that can be loaded together by Minetest. Examples of such games are the inbuilt "Minetest Game", which focuses on building, and "Minetest Saturn", which is a space simulation. 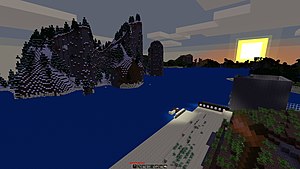 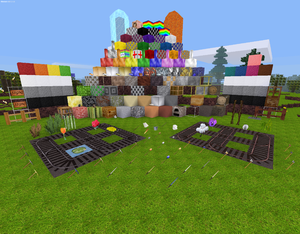 Player damage can be enabled or disabled, examples being damage from monsters and dangerous materials, or falling from a height. Minetest also includes a "creative mode", which provides infinite resources for the player to create with. When this mode is disabled, all resources must be manually collected by the player.[17]

The default game, "Minetest Game", behaves similarly to Minecraft. There are a variety of blocks to choose from, including natural resources and ores, and artificial materials such as wooden planks or sticks.[14] The game also has items such as swords, pickaxes, and other tools.

The Minetest engine allows for singleplayer and multiplayer modes.[18] For multiplayer mode, players can play online on existing servers, or host their own. Minetest allows the user to run a LAN multiplayer server by ticking a box and specifying the port. The default port is 30000, and the default IP is that of the host device. Allowing access from outside the local network requires port forwarding. If the server is global, the user can choose whether they want their server announced at a public listing, or to keep it private and require that players request the server IP and port from the user.[14]

3rd-party Minetest content (mods, games, etc.) is hosted and distributed via Git hosts such as GitHub, the Minetest Forum Mod section, the Minetest Content Database, and other file hosting services.

A fork of Minetest, Kidscode, is a subscription-based education tool where students can explore pre-built worlds or learn different subjects with each other in planned sessions.[20]

The European Organization for Nuclear Research (CERN) uses Minetest as a software environment for a collaborative game called "Craft The Web" which allows the players to learn how the web was made and what principles govern it.[7]

A community member of IBM's Qiskit created a Minetest game to introduce and demonstrate quantum computing.[8]

The original release of Minetest was version 0.0.1 in 2010.[1] The most recent significant update to the game engine was version 5.0.0, which was released in March 2019. This update added an online content browser accessible from within the loader menu. With this menu feature added, users are now able to download and play many different games and mods built in the Minetest engine, without having to search the internet using a seperate browser application.[22] The most recent version is 5.1.1, released in January 2020.[23] The game remains under active development as of April 2020.[23]

In 2013, freewaregenius.com gave a positive review of Minetest, stating that "it has had a lot of time to be finessed and perfected, and it shows."[24] In 2015, Opensource.com listed Minetest at #1 in its "Best open source games of 2015"[25] In 2017 Opensource.com again gave a favourable review of Minetest, stating that "Minetest is perhaps the most complete alternative to Minecraft", and noted its expansibility, stating that it "features a very user-friendly API for creating mods in Lua."[5] In 2017, MakeUseOf.com listed Minetest as one of the "20 Best Open Source Games".[26] In 2019, Linux Format wrote positively of Minetest Game, stating: "This the [sic] most outstanding and playable clone of Minecraft, fully open source and free"[27] Also in 2019, PCMAG listed Minetest among "The best Sandbox Creation Games for Minecraft Fans".[6]

Since November 2013 Minetest has been downloaded over 1.3 million times from GitHub.[28] The Android version of Minetest has over 100 thousand downloads on the Google Play store,[29] and as many as 250,000 downloads on Aptoide[30]

This article "Minetest" is from Wikipedia. The list of its authors can be seen in its historical and/or the page Edithistory:Minetest. Articles copied from Draft Namespace on Wikipedia could be seen on the Draft Namespace of Wikipedia and not main one.

Share
Retrieved from "https://en.everybodywiki.com/index.php?title=Minetest&oldid=933708"
Categories:
Hidden categories:
This page was last edited on 8 August 2020, at 22:11.
Content is available under License CC BY-SA 3.0 unless otherwise noted.
This page has been accessed 2,152 times.
Privacy policy
About EverybodyWiki Bios & Wiki
Disclaimers