minus delta t (−Δ t difference of two times with negative value) is a performance group and band which was founded by Karel Dudesek, Chrislo Haas and Mike Hentz in 1978, and started to work in Zurich, Switzerland, attracting attention with experimental performance art until the mid-1990s.[1] The group was a significant part of Neue Deutsche Welle (NDW/New German Wave)holding its ground in the experimental field and refusing commercialisation, and playing numerous groundbreaking concerts in Europe. The core idea was the obsolescence of stage and audience and the unique composition technique of their music, composing an atmospheric score based on emotions during the performance. In 1988, the group joined other professionals (Benjamin Heidersberger - low band society), shifted its interest into media art, renamed itself "Van Gogh TV" and "Ponton media art lab". It initiated temporary local pirate radio and TV stations in Germany. In 1992, it created the first worldwide interactive television project, using telephone systems and internet-like technologies in tandem with national broadcasting stations. In 1996, it invented a three-dimensional multi-user, multi-client/server system called “Worlds Within” running on the internet. Team members Martin Schmitz, Tim Becker and Ernst Pfannenschmidt were later to cooperate on a pilot project with AT&T, Bell labs and German Telecom. In 2012, minus delta t reformed to develop their Opera Work, exhibitions and installations, and resuming the transport of the stone to China.[1]

On that trip, they traveled to India through Yugoslavia, Bulgaria, Turkey, Syria, the Lebanon, Pakistan, and Nepal. The trip concluded with the “Bangkok Festival” in 1984, which the group had helped conceive and organise. [3] 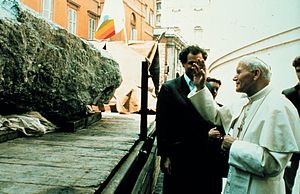 minus delta t during the European tour, meeting Pope John Paul II in Rome at the Vatican city, Italy.

Lifting the stone from the river banks of Ganges, where stone was for 4 years under water. 1990 Rishikesh, India.

In one of the group's first shows, at Ratinger Hof in Düsseldorf in 1978, they spilled plaster over the floor in an event they titled “Cleaning Performance”, threw around animal carcasses, and let flies swarm out that had been specifically bred for this purpose. Moreover, they deliberately prevented the audience from consuming alcohol in the venue on that Friday night by placing Robert Görl with his drum set on top of the bar.[4][not in citation given]

At the “Shvantz! Festival“ in the Frankfurt Städelschule on 2. November 1979, an event organized by the artists of Walter E. Baumann’s Schvantz! Kunstmagazin (Schvantz! Art magazine), the group made its mark.[clarification needed][5][not in citation given]

At “Geräusche für die 80er“ (Noises for the Eighties) organized by Zickzack in the Markthalle Hamburg on 29 December 1979, they played back the sounds of police radio on the PA system to an audience waiting for rock music.[1] In 1980, Chrislo Haas left the line-up, and Wolfgang Georgsdorf, Gerard Couty, Bernhard Müller, and others, joined the group. [6]

In 1982, minus delta t instigated an event entitled “Bangkok Project”, transporting a bluestone rock (weighing 5.5 tons) from Europe (starting at the Preseli Mountains) to Asia (New Delhi , India) as from 1982. A “share” was issued for this action[7], with a graphic design conceived by the Austrian artist Chris Scheuer.[8] During the European tour the group met with Ben Vautier, Bruno Kreisky and Pope John Paul among others. [3][9]

In 1987, minus delta t showed up as “cultural police” on the premises of the documenta 8 and subjected clueless visitors to awkward interrogations.[10] Moreover, some members of the group ran a pirate TV channel in the frame of documenta’s performance programme, which was curated by Elisabeth Jappe, and invited other artists to produce their own contributions in a container studio, and, with “Computer Voodoo“, also included the emerging computer networks in the active flow of performance. [11]

In 1987, minus delta t staged its avant-garde dramatization Opera Death in Berlin. The opera was released on 3 LP records by the independent label Ata Tak in the same year.[12][13]

In the following years, experimental combinations of Internet and television were further developed by minus delta t for several projects commissioned by Ars Electronica, Linz, and through the frame of the group Van Gogh TV and Ponton European Media art lab, which was based in Hamburg, Germany.[14] They reappeared as “Piazza Virtuale“ at the documenta IX 1992, 100 days the first interactive television project, commissioned by Jan Hoet, broadcasting all over Europe, north Africa, Russia, with video links to USA and Japan. [15]

Since 1994 the founders Mike Hentz and Karel Dudesek embarked on separate avenues, with their artistic works, holding temporary teaching positions in China, USA and holding Professorships in Germany, Austria and United Kingdom.[16][17]

In 2013 Suezan Studio in Japan re-released the minus delta t record on CD.[18] In 2014 first space based audio installation at the Heidelberg Kunstverein, Germany about minus delta t. [19] In 2015 the group started to plan the continuation of the "Bangkok Project" by transporting the stone from New Delhi, India to Shanghai, China, and to develop its archive.[20]

You have to Sign in or create an account to comment this article !
Retrieved from "https://en.everybodywiki.com/index.php?title=Minus_delta_t&oldid=933815"
Categories:
Hidden categories:
This page was last edited on 8 August 2020, at 22:38.
This page has been accessed 321 times.
Content is available under License CC BY-SA 3.0 unless otherwise noted.
Privacy policy
About EverybodyWiki Bios & Wiki
Disclaimers
Mobile view