Missing is a public awareness campaign which aims to sensitize people to the plight of millions of girls who are trafficked for sexual exploitation. Missing is a four-part public awareness campaign. It tackles the first P of the United Nations Global Initiative to Fight Human Trafficking four P strategy on anti-trafficking, prevention through advocacy and awareness.[1] Missing's work in rural Bengal has helped save girls from sexual exploitation and rehabilitate them. Missing: Game for a Cause won NASSCOM's Indie Game of The Year Award.

NGO's collaborating with MISSING for the stencil project

Missing raises awareness amongst the populace of the millions of girls who are being trafficked into prostitution and bring this issue out of the closet by engaging and educating the public on the crime, and the damage it inflicts on its victims. MISSING makes the masses aware of the consequences of their actions, be it on the Internet or physical, which creates a demand for girls.[2] Missing creates awareness that translates into action taken by the government and the public. Awareness is essential in preventing this crime and is key to beating traffickers.

During Leena's career as a photographer, she was hit by a very important issue – sex trafficking. Today, there are 3 million women in prostitution in India, out of which 1.2 million are young girls. The average age of recruitment of girls into prostitution is between 9 and 12 years of age.[2] These are disturbing statistics. When Leena first started working with NGOs like Hamari Muskan and New Light as an[artist, she dealt with the issue by creating complicated installations within gallery spaces that brought up the dark realities of sex trafficking in a very graphic way. But this did not seem right. To create mass awareness, she realised she needed to distill the issue into a simple, engaging piece of art that spoke to everyone and transcended language and space. That is when her public art project MISSING emerged. MISSING was finally launched to great reviews at the India Art Fair in January 2014.

The work is larger than life black silhouettes of young girls placed against the urban skyline. Constructed from iron sheets, forged and painted pitch black, they seem like sharp, black cut out of the sky. Holes, into which, millions of girls disappear from the face of the Earth. These expanded forms act as memorials to these young girls who have disappeared, vanished into thin air. It is hoped that these emblematic silhouettes generate curiosity, recognition and finally a sense of deep loss, recovering them to from the abyss of the sky.[3] A recovery that inspires millions of others to act on behalf of the fate of those who have disappeared and are alluded by justice. 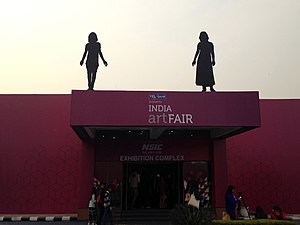 Black silhouettes of young girls placed against the urban skyline

The works are larger than life black silhouettes of young girls placed against the urban skyline.[4] Constructed from iron, forged and painted pitch black, they seem like sharp, black holes cut out of the sky. Holes, into which millions of girls, disappear from the face of this Earth. These silhouettes will serve as a constant reminder to people about the millions of girls who have disappeared because of humanity's negligence. These also work as memorials of the girls who have gone missing. The public art sculptures were launched at the India Art Fair and recently shown at the Pune Biennale.[5] 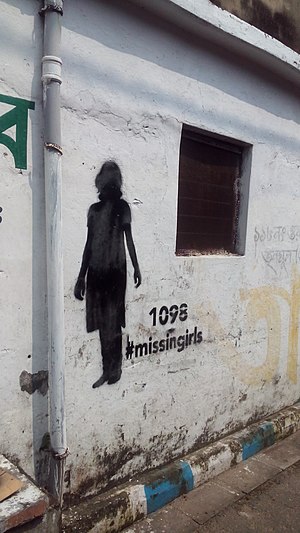 The Silhouette is seen again and again across the country in the street stencil project. Students, artists and rescued girls, NGOs are joining hands to put the Missing silhouettes on the city walls. These silhouettes act as constant reminders of the missing girls as well as a remembrance of those gone.[6] Missing has already created around 1000 stencils across villages and cities in India. Missing has also been tying up with NGOs and organizations like Rotary Teach Programme, Yes Foundation, Rotaractors, iPartner India, Women and Child Development Ministry, iVolunteer and others who have an all-India presence, to spread the word on the project and the heinous issue of trafficking. The stencil is currently being used as a key awareness tool in a grassroots awareness campaign that MISSING is conducting along with the Women and Child Development Ministry. This campaign aims to spread awareness among highly vulnerable youth across rural communities in West Bengal.[7]

Missing: Game for a Cause[edit] 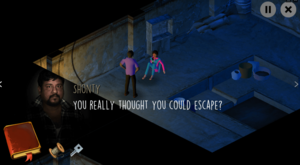 A screenshot of the Missing Game

Missing: Game for a Cause is an interactive game designed to allow players to experience what a missing person goes through when she is trafficked into prostitution, a world into which millions of girls are lost every year.[8] The game is intended for a mature audience, and aims to expose the player to the dark world of human trafficking and raise awareness about it. The player gets into the shoes of the trafficked victim and experiences her frustration, vulnerability, and helplessness, which shakes a player up. Missing's game developer has travelled with Leena Kejriwal, the artist behind the MISSING campaign, to the different red light districts in Kolkata and to rural Bengal from where the girls get trafficked, to better understand the issue. He has been with Missing through the ground research phase and interacted with survivors to understand the core problems, tactics they have to resort to lure a customer and the plight of the trafficked girl.

Educating the students about Human trafficking

Missing observed that many youth in vulnerable areas are unaware of the threat of trafficking that is immanent to them. Therefore, it felt that an important step in overcoming sex trafficking is to educate vulnerable populations of the threat it poses to them. There have been a series of talks in schools and colleges to ensure that the Next Generation is aware of the problem at hand. To back the Installations and talks, Missing has been doing an important ground project in the form of a stencil project across the country, where students, artists and rescued girls, NGOs are working together to put the Missing silhouettes on the city walls. 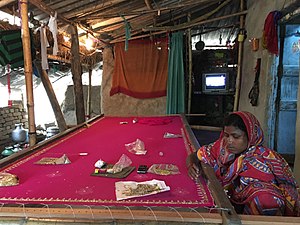 A survivor working with MISSING on the livelihood project

Missing's work in rural Bengal has led them to start a livelihood programme that benefits both survivors of trafficking as well as Vulnerable girls in high-trafficking areas. Missing mentor's girls for tailoring, computer programming, videography and in poultry farming. Missing hopes that they can in their own right become mentors and role models for others in their community and take the call for End Demand and End Slavery to a new level. Given that poverty is one of the main factors driving the sex trafficking industry, providing economic opportunities to women in Vulnerable communities Missing can reduce their risk of being trafficked.

Share
Retrieved from "https://en.everybodywiki.com/index.php?title=Missing_(awareness_campaign)&oldid=2352676"
Categories:
Hidden categories:
This page was last edited on 4 March 2022, at 14:37.
Content is available under License CC BY-SA 3.0 unless otherwise noted.
This page has been accessed 29 times.
Privacy policy
About EverybodyWiki Bios & Wiki
Disclaimers