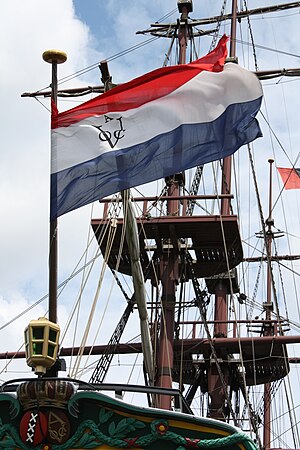 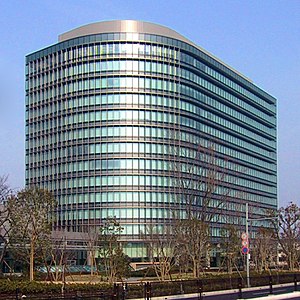 Toyota is one of the world's largest multinational corporations with its headquarters in Toyota City, Japan.

A multinational corporation (MNC) is usually a large corporation incorporated in one country which produces or sells goods or services in various countries.[15] Two common characteristics shared by MNCs are their large size and the fact that their worldwide activities are centrally controlled by the parent companies.[16]

MNCs may gain from their global presence in a variety of ways. First of all, MNCs can benefit from the economy of scale by spreading R&D expenditures and advertising costs over their global sales, pooling global purchasing power over suppliers, and utilizing their technological and managerial know-how globally with minimal additional costs. Furthermore, MNCs can use their global presence to take advantage of underpriced labor services available in certain developing countries, and gain access to special R&D capabilities residing in advanced foreign countries.[17]

The problem of moral and legal constraints upon the behavior of multinational corporations, given that they are effectively "stateless" actors, is one of several urgent global socioeconomic problems that emerged during the late twentieth century.[18]

Potentially, the best concept for analyzing society's governance limitations over modern corporations is the concept of "stateless corporations". Coined at least as early as 1991 in Business Week, the conception was theoretically clarified in 1993: that an empirical strategy for defining a stateless corporation is with analytical tools at the intersection between demographic analysis and transportation research. This intersection is known as logistics management, and it describes the importance of rapidly increasing global mobility of resources. In a long history of analysis of multinational corporations we are some quarter century into an era of stateless corporations - corporations which meet the realities of the needs of source materials on a worldwide basis and to produce and customize products for individual countries.[19]

The main characteristics of multinational companies are:

Overview of Fort Zeelandia in Dutch Formosa (in the 17th-century). It was in the Dutch rule period of Taiwan that the VOC began to encourage large-scale mainland Chinese immigration.[24] The VOC's economic activities changed significantly the demographic and economic history of the island.[25][26] 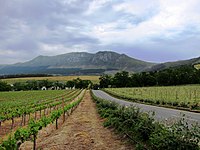 Groot Constantia, the oldest wine estate in South Africa. The South African wine industry (New World wine) is among the lasting legacy of the VOC era.[27][28] Like native economy of Taiwan in pre-VOC era,[29] pre-1652 South Africa was virtually undeveloped or was in almost primitive state. In other words, the recorded economic history of South Africa and Taiwan both began with the VOC period.

When a corporation invests in the country which it is not domiciled, it is called foreign direct investment (FDI).[30] Countries may place restrictions on direct investment; for example, China has historically required partnerships with local firms or special approval for certain types of investments by foreigners,[31] although some of these restrictions were eased in 2019.[32] Similarly, the United States Committee on Foreign Investment in the United States scrutinizes foreign investments.

In addition, corporations may be prohibited from various business transactions by international sanctions or domestic laws. For example, Chinese domestic corporations or citizens have limitations on their ability to make foreign investments outside of China, in part to reduce capital outflow.[33] Countries can impose extraterritorial sanctions on foreign corporations even for doing business with other foreign corporations, which occurred in 2019 with the United States sanctions against Iran; European companies faced with the possibility of losing access to the US market by trading with Iran.[34]

Multinational corporations can select from a variety of jurisdictions for various subsidiaries, but the ultimate parent company can select a single legal domicile; The Economist suggests that the Netherlands has become a popular choice, as its company laws have fewer requirements for meetings, compensation, and audit committees,[35] and Great Britain had advantages due to laws on withholding dividends and a double-taxation treaty with the United States.[35]

Corporations can legally engage in tax avoidance through their choice of jurisdiction, but must be careful to avoid illegal tax evasion.

Corporations that are broadly active across the world without a concentration in one area have been called stateless or "transnational" (although "transnational corporation" is also used synonymously with "multinational corporation"[36]), but as of 1992, a corporation must be legally domiciled in a particular country and engage in other countries through foreign direct investment and the creation of foreign subsidiaries.[37]:115 Geographic diversification can be measured across various domains, including ownership and control, workforce, sales, and regulation and taxation.[37]

Multinational corporations may be subject to the laws and regulations of both their domicile and the additional jurisdictions where they are engaged in business.[38] In some cases, the jurisdiction can help to avoid burdensome laws, but regulatory statutes often target the "enterprise" with statutory language around "control".[38]

as of 1992[update], the United States and most OECD countries have legal authority to tax a domiciled parent corporation on its worldwide revenue, including subsidiaries;[37]:117 as of 2019[update], the US applies its corporate taxation "extraterritorially",[39] which has motivated tax inversions to change the home state. By 2019, most OECD nations, with the notable exception of the US, had moved to territorial tax in which only revenue inside the border was taxed; however, these nations typically scrutinize foreign income with controlled foreign corporation (CFC) rules to avoid base erosion and profit shifting.[39]

In practice, even under an extraterritorial system taxes may be deferred until remittance, with possible repatriation tax holidays, and subject to foreign tax credits.[37]:117 Countries generally cannot tax the worldwide revenue of a foreign subsidiary, and taxation is complicated by transfer pricing arrangements with parent corporations.[37]:117

For small corporations, registering a foreign subsidiary can be expensive and complex, involving fees, signatures, and forms;[40] a professional employer organization (PEO) is sometimes advertised as a cheaper and simpler alternative,[40] but not all jurisdictions have laws accepting these types of arrangements.[41]

Disputes between corporations in different nations is often handled through international arbitration.

The actions of multinational corporations are strongly supported by economic liberalism and free market system in a globalized international society. According to the economic realist view, individuals act in rational ways to maximize their self-interest and therefore, when individuals act rationally, markets are created and they function best in free market system where there is little government interference. As a result, international wealth is maximized with free exchange of goods and services.[42]

To many economic liberals, multinational corporations are the vanguard of the liberal order.[43] They are the embodiment par excellence of the liberal ideal of an interdependent world economy. They have taken the integration of national economies beyond trade and money to the internationalization of production. For the first time in history, production, marketing, and investment are being organized on a global scale rather than in terms of isolated national economies.[44]

International business is also a specialist field of academic research. Economic theories of the multinational corporation include internalization theory and the eclectic paradigm. The latter is also known as the OLI framework.

The other theoretical dimension of the role of multinational corporations concerns the relationship between the globalization of economic engagement and the culture of national and local responses. This has a history of self-conscious cultural management going back at least to the 60s. For example:

Ernest Dichter, architect, of Exxon's international campaign, writing in the Harvard Business Review in 1963, was fully aware that the means to overcoming cultural resistance depended on an "understanding" of the countries in which a corporation operated. He observed that companies with "foresight to capitalize on international opportunities" must recognize that "cultural anthropology will be an important tool for competitive marketing". However, the projected outcome of this was not the assimilation of international firms into national cultures, but the creation of a "world customer". The idea of a global corporate village entailed the management and reconstitution of parochial attachments to one's nation. It involved not a denial of the naturalness of national attachments, but an internationalization of the way a nation defines itself.[45]

See also: Charter company and Neocolonialism
The United East India Company (VOC) was an early pioneering model of the multinational/transnational corporation, in its modern sense,[lower-alpha 2] at the dawn of modern capitalism.[48][49][50][51][52][53][54][55][56]

17th-century etching of the Oost-Indisch Huis (Dutch for "East India House"), the global headquarters of the United East India Company (VOC) in Amsterdam.

The Fort Batavia, seen from West Kali Besar (Andries Beeckman, c. 1656). In Batavia in 1610 the VOC established its overseas administrative centre, as the second headquarters, with a Governor-General in charge, as the Company's de facto chief executive. The Company also had important operations elsewhere.

The history of multinational corporations is closely intertwined with the history of colonialism, the first multinational corporations being founded to undertake colonial expeditions at the behest of their European monarchical patrons.[57] Prior to the era of New Imperialism, a majority of European colonies not held by the Spanish and Portuguese crowns were administered by chartered multinational corporations.[58] Examples of such corporations include the British East India Company,[59] the Dutch East India Company, the Swedish Africa Company, and the Hudson's Bay Company.[60] These early corporations facilitated colonialism by engaging in international trade and exploration, and creating colonial trading posts.[61] Many of these corporations, such as the South Australia Company and the Virginia Company, played a direct role in formal colonization by creating and maintaining settler colonies.[61] Without exception these early corporations created differential economic outcomes between their home country and their colonies via a process of exploiting colonial resources and labour, and investing the resultant profits and net gain in the home country.[62] The end result of this process was the enrichment of the colonizer and the impoverishment of the colonized.[63] Some multinational corporations, such as the Royal African Company, were also responsible for the logistical component of the Atlantic slave trade,[64] maintaining the ships and ports required for this vast enterprise. During the 19th century, formal corporate rule over colonial holdings largely gave way to state-controlled colonies,[65][66] however corporate control over colonial economic affairs persisted in a majority of colonies.[61][65]

During the process of decolonization, the European colonial charter companies were disbanded,[61] with the final colonial corporation, the Mozambique Company, dissolving in 1972. However the economic impact of corporate colonial exploitation has proved to be lasting and far reaching,[67] with some commentators asserting that this impact is among the chief causes of contemporary global income inequality.[63]

The aggressive use of tax avoidance schemes, and multinational tax havens, allows multinational corporations to gain competitive advantages over small and medium-sized enterprises.[72] Organizations such as the Tax Justice Network criticize governments for allowing multinational organizations to escape tax, particularly by using base erosion and profit shifting (BEPS) tax tools, since less money can be spent for public services.[73]

Share
Retrieved from "https://en.everybodywiki.com/index.php?title=Multinational_corporation&oldid=1451037"
Hidden categories:
This page was last edited on 8 March 2021, at 14:46.
Content is available under License CC BY-SA 3.0 unless otherwise noted.
This page has been accessed 1,196 times.
Privacy policy
About EverybodyWiki Bios & Wiki
Disclaimers