Download books of Narmin Kamal or buy them on amazon

Alongside Azerbaijan, her fiction and creative non-fiction appeared in various publications including the New York Times, Der Spiegel, Qantara.de, and she was a long-time columnist for BBC's Azerbaijani Service. As an independent voice from Azerbaijan, she has been widely published in international anthologies including "Glückliche Wirkungen: Eine literarische Reise in bessere Welten" (2017, Ullstein Buchverlage). She contributed text to the installation Translated By held at SALT Galata in 2012[2] and its associated book (ISBN 978-9944-731-28-7 Search this book on

.), published with the support of the British Council.[3]

As a novelist she made her debut with "Aç, mənəm" (2010, Baku, Qanun Publishing), critically acclaimed, won the Imadaddin Nasimi Prize[4] and Young Novelist RFE/Radio Liberty Prize[5] for debut novels in Baku.

Kamal has degrees in philosophy and history of philosophy. Her PhD dissertation on Umberto Eco and Post-modern Philosophy was published in 2008 and 2012 in Baku (Qanun Publishing). She was a visiting researcher at University of Navarra of Spain and obtained residence as a guest researcher/PhD student from Bologna University of Italy.

She was one of twelve European writers invited to write an essay for the young.euro.connect German festival.[6] She was among the six invited to the readings in Berlin and Munich in 2008.[7] She was a writer-in-residence at Kulturkontakt, Austria/Vienna in 2011. 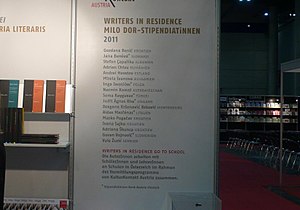 N.Kamal translated Sophie's World a novel on history of philosophy by Norwegian author Jostein Gaarder from English into Azerbaijani (2010)[8].

In an earlier life, she was one of the founder members of AYO (Azad Yazarlar Ocagi), which was a kind of Bloomsbury Group of Azerbaijan[9]. She served as a deputy editor at Alatoran (2004-2008), the first independent literature magazine in Azerbaijan after the totalitarian era of the Soviet Soc-realism[10]. The magazine soon became the voice of a generation. Alatoran published new generation Azerbaijani writers, as well as translations from new American and European literature as well as Russian post-modern authors, and established itself as the leading voice of a new generation literary intellectuals in Azerbaijan. The literary group is known today mostly for its dissident voice criticizing the state policy and certain tendencies of the society.

You have to Sign in or create an account to comment this article !
Retrieved from "https://en.everybodywiki.com/index.php?title=Narmin_Kamal&oldid=936927"
Categories:
Hidden categories:
This page was last edited on 9 August 2020, at 16:14.
This page has been accessed 85 times.
Content is available under License CC BY-SA 3.0 unless otherwise noted.
Privacy policy
About EverybodyWiki Bios & Wiki
Disclaimers
Mobile view