National Dastak is an Indian web channel launched in 20 December 2015[1] and is focused on the issues of Bahujan sections[2] and marginalised sections of India that are often ignored by mainstream media.[3][4] 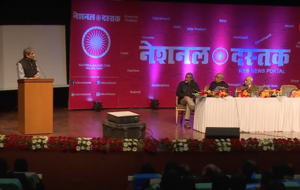 National Dastak is known for live reporting,[5][6] political news[7][8][9] and broadcasting documentaries and series of programs on marginalized and victimized sections of society in India.[10] Its website was ranked 94,827th in popularity among websites in India in February 2019.[11]

As of June 2019[update] its YouTube channel subscriptions had reached more than 3 million.[12][13]

Retrieved from "https://en.everybodywiki.com/index.php?title=National_Dastak&oldid=1129646"
Categories:
Hidden categories:
This page was last edited on 17 November 2020, at 13:46.
This page has been accessed 168 times.
Content is available under License CC BY-SA 3.0 unless otherwise noted.
Privacy policy
About EverybodyWiki Bios & Wiki
Disclaimers