Natural Gas as an Instrument of Russian State Power 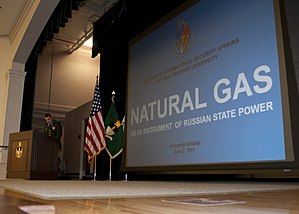 The author presented the concept of natural gas as an instrument of Russian state power before Maj. Gen. Bennet S. Sacolick, the SWCS Commanding General at Fort Bragg, NC. On June 2, 2011, the monograph received the Dean's Research Award from the National Defense University College of International Security Affairs.[1]

Natural Gas as an Instrument of State Power[2] is a book written by Ion A. Iftimie. The author defended the proposed concept before the leadership of the U.S. Army John F. Kennedy Special Warfare Center and School on June 2nd, 2011.[1] The first edition of the book was published in October 2011[3] by the Strategic Studies Institute. The publication supported the Energy Security Initiative of Senator Richard Lugar, head of the U.S. Senate's Foreign Relations Committee. In 2015, the second edition of the book was published by Westphalia Press, an imprint of the Policy Studies Organization.[4] The book is a recommended reading by NATO on energy security[5] and was quoted in early reports prepared for the European Parliament to provide an overview of the energy sectors of the countries of the Eastern Partnership (EaP).[6]

In 1935 the League of Nations imposed an oil embargo on Italy in order to make it discontinue the aggression towards Ethiopia; effectively coining the concept of the "oil weapon".[7] In 1941, the United States imposed an oil embargo on Japan following its incursion into northern Indochina.[8] The most known example of oil as a "weapon"[9] is, however, the 1973 Arab Oil Embargo, when the members of the Organization of Arab Petroleum Exporting Countries (OAPEC) imposed an oil embargo meant to lessen the American support for Israel.[10] In1995, Senator Alfonse D'Amato introduced the “Iran Foreign Oil Sanctions Act” to sanction foreign firms' exports to Iran of energy technology.[11] The Joint Comprehensive Plan of Action (JPCOA) has lessened some of the oil sanctions against Iran. However, in 2018, the United States withdrew from the Joint Comprehensive Plan of Action, reinforcing the oil sanctions. In 2019, the U.S. also formally adopted sanctions on Venezuelan national oil company PDVSA, as well as on CITGO, its US-based distribution arm.[12] Despite precedent, the use of oil as an economic weapon has arguably failed throughout history to reach its intended scope.[13]

On the eve of the Riga Summit, Senator Richard Lugar, head of the U.S. Senate's Foreign Relations Committee, declared that "the most likely source of armed conflict in the European theatre and the surrounding regions will be energy scarcity and manipulation."[14] In support of this assertion, the author argues that Russia developed "the capacity to use unilateral economic sanctions in the form of gas pricing and gas disruptions against many European North Atlantic Treaty Organization (NATO) member states".[4] The author also distinguishes between the 'oil weapon' and 'natural gas weapon'. He suggests that the fallacy of most scholars that argue against the potential of natural gas as a weapon of economic warfare has often been to analyze a nation’s dependency on oil and gas together. Analyzing the two energy markets separately, however, reveals that natural gas is a more persuasive instrument of coercion in the contemporary security environment than oil was in the traditional security environment. In the twenty-first century, the two conditions that arise from the nature of natural gas global market and players—the political and economic dimensions—make natural gas a compelling tool of coercion for aspiring energy super-states.[3] While only 39% of total European Union natural gas imports originate from Russia (as of 2017), consumption of Russian natural gas is a major concern for many EU member states. The shares of Russian natural gas in the domestic gas consumption differs among these countries[15]:

Combined, these nations represent 66.1% of Russia’s overall natural gas exports. Simple arithmetic dictates that a complete shutoff of Russian natural gas to Europe would hurt the Russian economy more than the EU’s economy. The author argues, however, that it would also bankrupt the industry of the Baltic States, Finland, and most ECE countries. Because the price they would pay is significantly higher, these nations are less likely to stand up united with the West against Russia in more than just words; in which case Russia needs only to find a reason to renegotiate the price of natural gas with these nations to silence them.[3] This vulnerability was also emphasized in 2015 also by E3G independent experts on climate diplomacy and energy policy: 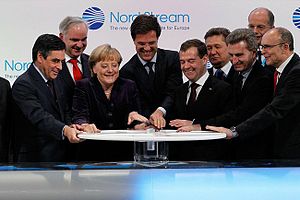 Ceremony of opening of Nord Stream pipeline with Angela Merkel and Dmitry Medvedev.

"Countries most vulnerable to Russian gas supply disruptions represent less than 10% of European gas demand. Only 7% of gas demand comes from countries highly exposed to Russian imports (i.e. Share of Russian imports as in total gas consumption is more than two thirds: Bulgaria, Estonia, Czech Republic, Greece, Finland, Hungary, Latvia, Lithuania, Slovakia, Slovenia). This volume is equivalent to about a fifth of Russia’s current exports to the EU. This shows that protecting the most exposed countries could be achieved through targeted action in these Eastern European countries."[16]

The author argues, however, that EU’s failure to successfully advance a common energy policy can be exemplified by the building of the Nord Stream pipeline, which embodies the divisions between the center and the periphery of the EU—between Old and New Europe.[3]

Natural Gas as an Instrument of Russian State Power on Amazon

Retrieved from "https://en.everybodywiki.com/index.php?title=Natural_Gas_as_an_Instrument_of_Russian_State_Power&oldid=937356"
Categories:
Hidden category:
This page was last edited on 9 August 2020, at 17:32.
This page has been accessed 139 times.
Content is available under License CC BY-SA 3.0 unless otherwise noted.
Privacy policy
About EverybodyWiki Bios & Wiki
Disclaimers
Mobile view