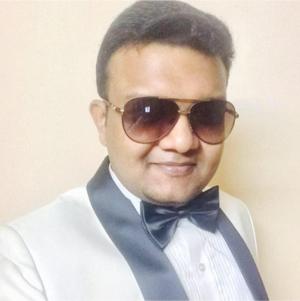 Navneet Makharia[1] (1989) is an Indian Gaming Entrepreneur from Kolkata, CEO of Ability Games Private Limited [2] and games like PokerLion[3][4], Rummy24 & 11Wickets[5]. He is also the owner of a MIPL Poker team, Goa Lions[6][7]. With his passion for serving the society, he runs a non profitable business in the field such as e-medicine. His keen interest in cause of supporting the society has made him invested in multiple rising start-ups. He is a gaming consultant & loves to share his experience with budding ventures.

Navneet Makharia is the director & CEO of Ability Games Pvt Ltd.[8][9], which is an online gaming start-up focusing on real money skill games. Apart from gaming industry he is also active in other businesses and is the co-founder of start-ups like Speed Medicine[10], a healthcare initiative. He first launched the real money card games, like PokerLion.com, Rummy24.com[11][12] and online fantasy sports platform like 11Wickets[13], which are the current trend of online game industry. He is also a keen enthusiast of poker games and takes part in various small poker game gatherings and poker events. Though, he is not a Bengali by birth, he is fluent in Bangla, English, Hindi and Marwari. He is a multi-skilled young professional.

Navneet Makharia researched on Crude oil properties and was awarded the 1st prize at National Conference on Bioremediation and Sustainable Environmental Technologies held in Bapatla in Guntur of Andhra Pradesh.

He has been as a Chief Guest & Speaker to various Start-up & Gaming Conferences.

Retrieved from "https://en.everybodywiki.com/index.php?title=Navneet_Makharia&oldid=1796800"
Categories:
Hidden category:
This page was last edited on 13 July 2021, at 05:20.
This page has been accessed 905 times.
Content is available under License CC BY-SA 3.0 unless otherwise noted.
Privacy policy
About EverybodyWiki Bios & Wiki
Disclaimers
Dark mode