Netanel Cohen (Hebrew: נתנאל כהן‎, born 11 November 1986) is an Israeli indie/folk/rock musician and singer-songwriter. As a teenager, Cohen & his folk bank performed at local pubs mostly with covers. In 2010, Cohen self-released his first album Green Cabin. The album represented Cohen's perspective & criticism regarding the modern-capitalistic society and includes songs such as "Rather be a Bird" 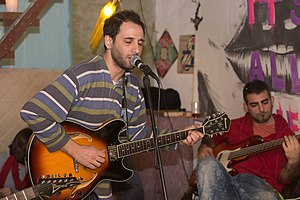 Netanel Cohen playing guitar at a live performance in Beer-Sheva

During the years 2011–2014, Cohen composed music for texts written together with Madrooba band. During that time, Cohen focused on creating a unique sound signature. In 2013, Cohen performed at Smilansky Festival and presented a local interpretation to Funkadelic's song, "Maggot Brain".

During the years 2013–2017, Cohen was active in Beer-Sheva's old city and worked with artists such as the guitarist Amir Lasry, the drummer Dan Oved and the bass player Yuval Kogman. In 2018, Cohen released his EP Album About Time. The album was recorded & produced by Netanel and includes songs in English and Hebrew.

His first Album Green Cabin was released in 2010 and includes 12 songs. In 2018 Cohen self-released his EP Album About Time that includes 6 songs.