This article is about the community in St. Charles County, for the town located in Sullivan County, see: Newtown, Missouri.

New Town at St. Charles is a neighborhood within the city of St. Charles, Missouri. The community was developed with the principles of Traditional Neighborhood Design and New Urbanism.[1]

New Town is located in northeastern St. Charles County, approximately 18 miles (29 km) from the confluence of the Missouri and Mississippi rivers. New Town was built on a small natural ridge and is surrounded by low farmland and wetland. The area is home to many species of ducks,[2] cranes, geese, snakes, deer, fish, hawks, and eagles. The Great Rivers Greenway District and Katy Trail State Park both run close by New Town and provide residents access to wildlife.[citation needed]

In 1993, the Midwest experienced the most severe flood in recent history, and much of St. Charles County was underwater. Because of its higher elevation, little flooding occurred on the future site of New Town. Nevertheless, New Town's developers built a series of lakes and canals for drainage and used the excavated dirt to raise the site's elevation by several feet.[citation needed] 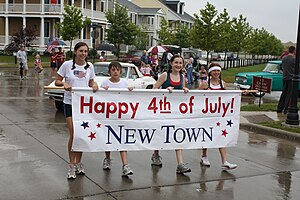 Greg Whittaker of Whittaker Builders, Inc.,[3] the architectural firm of Duany Plater-Zyberk & Company, and the City of St. Charles conducted a public charrette to design New Town in February 2003. A community incorporating a wide range of housing types, parks and greens, an organic farm, and a total of six neighborhood centers was planned. Construction began in 2004, and the first residents arrived in April 2005.[citation needed] When complete, New Town will cover 755 acres (3.06 km2), will contain up to 5,700 dwellings, and will be one of the largest new urbanist communities in the United States. It is expected to take 12 to 15 years to complete.[4]

In addition to the residential and recreational development, the planned community includes commercial space and currently has a few small businesses, restaurants, cafés. The community is also the headquarters of Whittaker Builders, Inc.[3] In October 2009, Whittaker Builders filed for Chapter 11 bankruptcy.[5]