New York Medical College (NYMC or New York Med) is a private biomedical health sciences university based in Valhalla, New York. Founded in 1860, it is a member of the Touro College and University System.

NYMC offers advanced degrees through its three schools: the School of Medicine (SOM), the Graduate School of Basic Medical Sciences (GSBMS) and the School of Health Sciences and Practice (SHSP). Total enrollment is 1,660 students (including 774 medical students) in addition to 800 residents and clinical fellows. NYMC employs 1,350 full-time faculty members and 1,450 part-time and voluntary faculty. The university has more than 12,000 alumni active in medical practice, healthcare administration, public health, teaching and research.

Part of the Touro College and University System since 2011, New York Medical College is located on a shared suburban 600-acre campus with its academic medical center, Westchester Medical Center (WMC) and the Maria Fareri Children's Hospital. Many of NYMC’s faculty provide patient care, teach, and conduct research at WMC. New York Medical College's university hospital, Metropolitan Hospital Center, in the Upper East side neighborhood of Yorkville and East Harlem in Manhattan, has been affiliated with NYMC since it was founded in 1875, representing the oldest partnership between a hospital and a private medical school in the United States. Metropolitan is part of the New York City Health and Hospitals Corporation (HHC), the largest municipal hospital and healthcare system in the country. 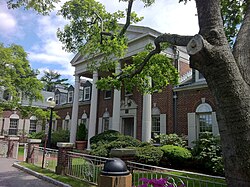 New York Medical College owes its founding in 1860 to a group of civic leaders who believed that medical studies should be practiced with a better understanding of what the patient needs. This group of civic leaders was led by the noted poet William Cullen Bryant who was an editor of the New York Evening Post. Bryant was concerned about the condition of hospitals and medical education in New York City. His main concern was with some of the medical practices being used to treat disease, which at the time included bleedings, purges, and the administration of strong drugs in too large doses.

The sister institution known as the New York Medical College and Hospital for Women was founded a few years later in 1863 by Clemence Lozier.[3] In 1867, it graduated Emily Stowe, the first female physician to practice in Canada. Three years later in 1870, Susan McKinney Steward graduated as the first African-American female physician in New York State. One of its later graduates, Adelaide Wallerstein in the class of 1905, also held a law degree, and founded the East Side Clinic for Children in 1906.[4][5] When the Women's College closed in 1918, its students transferred to New York Medical College.

In 1972, New York Medical College moved to Valhalla, at the invitation of the Westchester County government, which desired to build an academic medical center. Completed in 1977, Westchester Medical Center is currently the main academic medical center of the College. The College became affiliated with the Roman Catholic Archdiocese of New York in 1978, which helped provide financial stability and also established a shared commitment for the public good in the area of health care and the health sciences. The College recognized itself in the Catholic tradition and affiliated with several Catholic hospitals. When Flower and Fifth Avenue Hospital closed in 1979, the remaining operations of New York Medical College were transferred to the Valhalla campus. The college shortened its name to New York Medical College in 1982.

In 2010, the NYMC community celebrated the 150th anniversary of the founding of NYMC with a year full of sesquicentennial celebration activities. In that same year, it was announced that Touro College, a Jewish-sponsored institution in Manhattan had reached an agreement to assume the sponsorship role for New York Medical College from the Roman Catholic Archdiocese of New York. In a ceremony held at Bryant Park in New York City on May 25, 2011, New York Medical College officially joined the Touro College and University System creating one of the largest health sciences universities in the country. New York Medical College embraces its unique history in having been a secular institution to an institution in the Roman Catholic tradition, to now being part of a Jewish-sponsored institution of higher education.

In 2013, NYMC acquired the building an old IBM Research building at 19 Skyline Drive in Hawthorne, a 250,000 square foot, five-story building which provides essential space for offices and new programs.[6] In addition, NYMC acquired 7 Dana Road and has renovated it into a state-of-the-art biotechnology incubator (BioInc@NYMC) and Clinical Skills and Disaster Medicine Training Center.

In 2016, whimsical caricatures were added along the campus walkway. NYMC restored statues that were originally part of the children’s wing of Grasslands Hospital (known today as NYMC’s Sunshine Cottage Administration Building). The statues, along with the animal adornments on the building itself, were created to raise the spirits of sick children who were once treated here. The statues are thought to have been modeled after characters in English author Lewis Carroll's novel Alice's Adventures in Wonderland (1865). The statues live along the walkway that leads to Dana Road.

On June 8, 2017, New York Medical College opened the Center of Excellence in Precision Responses to Bioterrorism and Disasters. The center is the twelfth center of excellence in the state of New York, and the first in the Hudson Valley. The goal of the center is to maximize efficiency and effectiveness immediately after high-casualty events like terrorist attacks or natural disasters by improving resources provided to first responders. Additionally, the center provides training for responses to terror attacks and natural disasters, as well as researches response techniques to chemical and biological terror challenges. State Senator Terrence Murphy, a major supporter of state funding for the center, said the center "gives the region a vitally needed local resource to fight terrorism and potentially protect the lives of first responders and our families."[7]

After Empire State Development, New York state’s economic development organization, designated the facility as a center of excellence, New York Medical College received a state grant of $500,000 for costs associated with operations. Explaining New York’s goal for the center, Dr. Robert W. Amler, dean of the School of Health Sciences and Practice, said, "The state wants to bring innovation technology into each region in a way that will stimulate more outside investment from the federal government and private resources."[7] In the future, New York Medical College, through the center, aims to achieve full development of an "austere medicine" training facility for first responders, including scenarios they will likely encounter in reality, like active shooter threats, fires, and car accidents. In this aspect of training, trainees must encounter smoke, fog, loud noises, explosion simulations, and a variety of other disorienting effects.[7] 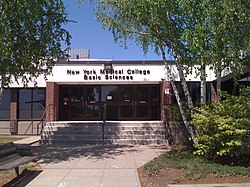 In addition to housing Doc's Cafe, bookstore and the Health Sciences Laboratory, the Basic Sciences Building (BSB) houses the Graduate School of Basic Medical Sciences, laboratories, and portions of the School of Medicine.

The college's involvement in graduate education dates back to 1910 when its records show the existence of advanced courses and research programs. Graduate courses in surgery and medicine were offered in the 1920s. In 1938, the College's charter was amended to include the authority to offer graduate degrees. In 1963, the Graduate School of Medical Sciences was officially founded, establishing for the first time a center for graduate education separate from the medical curriculum. The school was renamed the Graduate School of Basic Medical Sciences in 1969.

The GSBMS prepares future researchers, teachers, senior-level scientists and technicians to work in academia and industry. It is in the Basic Sciences Building along with facilities of the School of Medicine. The graduate school has approximately 150 enrolled students and 90 faculty members.

The Medical Education Center (MEC) houses facilities of the School of Medicine. It is distinguished by the prominent location of the naturally-lit gross anatomy laboratory (top floor).

Founded in 1860, the School of Medicine at New York Medical College is one of the oldest in the nation. It is the largest of the three graduate schools, awarding approximately 190 Doctor of Medicine degrees per year. Students have the opportunity to earn dual degrees such as M.D./M.P.H., M.D./M.S. or M.D./Ph.D. in the School of Health Sciences and Practice or Graduate School of Basic Medical Sciences

The School of Medicine has 774 actively enrolled students (31% in-state) along with 2,944 faculty members serving in 6 basic science and 20 clinical departments. Grading is Honors/High Pass/Pass/Fail. On-campus housing is provided for most preclinical students in furnished, unfurnished, single or married configurations.

The medical school has adopted the multiple mini interview system as well as the CASPer test,[9] both developed by McMaster University Medical School to select students for admissions.

For the past several years,[when?] the passing rate for the USMLE Step 1 exam has been between 99 and 100%, above the national average.[10] To date,[when?] 13,270 physicians have graduated from the School of Medicine with 97% being board-certified. Approximately 917 School of Medicine graduates currently[when?] serve on an American medical school faculty, including 18 department chairs.[11]

The New York Medical College has more hospitals ranked in the top 20 than any other university in the tri-state area.[12] Located on campus, Westchester Medical Center is the main academic medical center of New York Medical College School of Medicine. It is ranked among the top five hospitals in New York State for bariatric surgery, and is one of only 25 hospitals in the nation to receive the American Heart Association's 2008 Triple Performance Award.[13] Westchester Medical Center also boasts the highest case mix index of all hospitals in the United States.[14]

A significant portion of the medical school class relocates to New York City for clinical rotations, for which the primary site is Metropolitan Hospital Center in Manhattan. Housing is provided for rotations that are further from the main campus, such as those in Connecticut, New Jersey or Staten Island.

New York Medical College is affiliated with the following hospitals and health care organizations for graduate and undergraduate medical education: 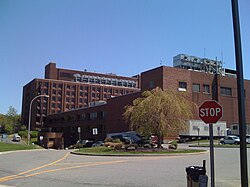 On-campus housing is available for most medical students and some graduate students.

Medical students are selected from colleges and universities across the country and the first-year class typically arrives with an average composite MCAT score of 512 and an average GPA of 3.6.[15][16]

Alumni House is a former white colonial farmhouse that was set for demolition in 1982 but was purchased by the NYMC Alumni Association and restored to its original construction.

Retrieved from "https://en.everybodywiki.com/index.php?title=New_York_Medical_College&oldid=840732"
Categories:
Hidden categories:
This page was last edited on 10 July 2020, at 02:25.
This page has been accessed 110 times.
Content is available under License CC BY-SA 3.0 unless otherwise noted.
Privacy policy
About EverybodyWiki Bios & Wiki
Disclaimers
Mobile view