Nostalgia Critic's The Wall is a video and associated album by American YouTube comedian Doug Walker under his YouTube persona, The Nostalgia Critic, released on September 8, 2019.[1] It is a direct parody and review of The Wall by Pink Floyd, satirizing its movie adaptation, with Slipknot and Stone Sour vocalist Corey Taylor featured as a prominent guest star alongside his son. The album was a collaboration between Walker and YouTube musician Rob Scallon, the latter of whom provided the instrumental tracks. Upon release, both the video and album gained an overwhelmingly negative response, with the album seen by some to be one of the worst of all time and the video receiving a like to dislike ratio of 18,000 likes to 44,000 dislikes (as of November 2019). 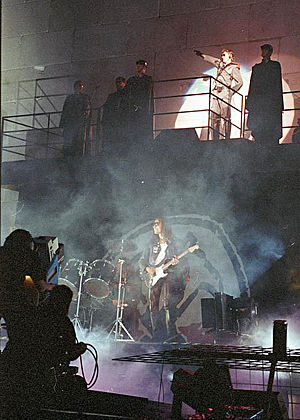 Nostalgia Critic's The Wall criticizes Pink Floyd's original Wall (of which a 1990 Roger Waters performance is shown here) for what it sees as its various faults, including its view of the educational system, overuse of slower material, and a nonsensical story.

The video begins with Corey Taylor meditating in a hotel room, when a hotel maid walks up to the door to find a sign reading, "ROCK STAR PONDERING, DON'T YOU DARE F@#*ING KNOCK!" Taylor is then shown opening YouTube on the television and starts watching a review of Pink Floyd – The Wall in the normal Nostalgia Critic format, when he gets a flashback to when his younger self, played by Taylor's son, Griffin Taylor, saw the movie for the first time despite its mixed reviews from movie critics ("When the Wall Broke Free, Part 1"). The maid, scared of the sign, knocks on the door anyway, and Walker breaks through the glass on the television and sings directly to Taylor telling him that this will be no ordinary Nostalgia Critic episode but rather a parody of The Wall ("In the Floyd"). Taylor then gets another flashback to his first time watching The Wall after finding a VHS tape of the movie in his father's computer desk, thus inspiring him to pursue a career in music ("When the Wall Broke Free, Part 2"). Soon, a mysterious shadow is shown, soon cutting to another flashback to when Taylor was in high school and is judged for liking the movie ("Corey!"). The flashback continues, but Walker shows up and makes his first point on the flaws of the movie, including the "Another Brick in the Wall, Part 2" scene, which he sees as a mere complaint of how high school is tough ("We Need More Victimization").

Eventually, when two of the students notice a train showing other students being deported to a "horrible place" and find it problematic due to how easily the viewers could connect it to the Holocaust, a giant Walker looks down and tries to convince them that it's not a World War II reference only to inadvertently announce the next song is about World War II ("So Long, Weird Song"). He then goes into a medley of "slow, mopey" songs which Taylor keeps fast-forwarding through and then falls asleep ("Is There Anybody Who Cares?"). The hotel crew comes into the room to try to wake him up, but to no avail ("Comfortably Dumb"), when he is placed in a garage. He wakes up from his sleep only to have another vision where he sees himself as the target of an echo chamber, but says that the scene can also apply to anyone that the internet hates ("In the Floyd (Again?)"). The echo chamber is then encouraged to start posting about the victim on social media in an attempt to make a change for society ("Waiting for the Point"), but then Taylor is then broken out of his vision when the shadow he sees earlier comes back.

A crowd then shows up to complain about how the movie is "too long" ("Bring the Runtime Down"), until Taylor finally meets Walker, who tries to tell him the deeper meaning of the movie ("The Deeper Meaning") until he is interrupted by a phone call from Sam Fennah asking if he has found his original character, Lucy Lacemaker, around. It is revealed that the hidden shadow Taylor and Walker have been seeing throughout the review is actually Lacemaker, who informs Walker that the surreal characters deserve way more development than the movie gave. When Walker doesn't quite understand, Lacemaker brings Fennah's other original characters along to sing a song to deliver her message ("Fennah's The Trial"), until Lacemaker informs Walker to "tear down the wall", until he punches a hole in a giant wall, only to find Taylor has fallen asleep again. He then gives up trying to tell Corey what he was going to say before Fennah interrupted him, and then Taylor complains about not getting a line or a song in the entire review. Walker then refuses to give his honest opinion about the movie because since the movie ended on such an open vagueness, it would only make sense that the review does so as well. This angers Taylor, saying that this is the opposite of a review, only for Walker to admit he liked the movie despite being "a little full of itself." He then tries to find out how to end the video, until Taylor ends it by singing the SpongeBob SquarePants theme song.

Both the video and the album were met with scathing reviews upon release, with critics claiming they were unfunny and that Walker was unable to understand Roger Waters' creative vision behind his music.[2] The video was panned for what many called unfunny jokes, poor animation, and intentional misunderstanding of the film by Walker.[3][4] An album of the song covers was released online alongside the video, receiving overwhelmingly negative reviews on multiple music sites and YouTube commentary channels.[5] Rob Scallon's work on the project, while being praised for its accuracy to the original music, was also criticized for feeling like "generic Pink Floyd karaoke".[6] The Youtube channel Jar Media claimed it as "the worst movie review on Youtube." Ralph Sepe Jr., who is both a content creator for Youtube and a Filmmaker, shared his reaction to the review as well.[7] Anthony Fantano gave its associated album a notable, strongly negative review, declining to give it a rating and instead citing it as "Not Good".[8]

All tracks written by Roger Waters, interpolated by Doug Walker, except where noted.

Retrieved from "https://en.everybodywiki.com/index.php?title=Nostalgia_Critic%27s_The_Wall&oldid=939433"
Categories:
Hidden categories:
This page was last edited on 10 August 2020, at 04:55.
This page has been accessed 706 times.
Content is available under License CC BY-SA 3.0 unless otherwise noted.
Privacy policy
About EverybodyWiki Bios & Wiki
Disclaimers