Ojuba is an Arabic Linux distribution from Jordan optimised for Arabic speakers as well as some Islamic tools. Ojuba is a computer operating system based on the Fedora distribution produced by an Arabic team led by Muayyad Al-Sa'di.[1]

Ojuba Linux is an Arabic Fedora-based distribution pre-installed with Arabic/Islamic packages like hijra and minbar, and many patched packages to give better Arabic support (like GNOME Terminal). Ojuba Linux also comes with some third-party packages implementing multimedia support for proprietary formats and proprietary drivers.[2][3][4]

Ojuba 4 Riyadh was based on Fedora 13 and the default GUI was GNOME. 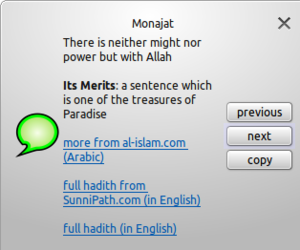 Ojuba 4 was based on Fedora 13 and from 24 June 2011, Fedora 13 had reached its end of life for updates and support. No further updates, including security updates, would be available for Fedora 13 (and Ojuba 4).[7] Ojuba is a Fedora-based Linux distribution is still active.[8] But if the system isn't updated in the future, the system may become vulnerable to exploits. The Sabily Linux distribution is an operating system designed by and for Muslims and is supported. Sabily has also suffered from lack of resources and has e.g. made a suspension of Sabily 12.04 codename "Ibn-AlBaytar" to name the next release 12.10 "Ibn-AlBaytar".[9] Generally to accelerate the development, more developers, graphical designers, packagers, iso builders must be found. Ojuba 16 was released on 20 April 2012[10] and will supported until 2013. In addition the 16 release GNOME 3 has replaced the GNOME 2 desktop environment. Ojuba 35 was released on 6 March 2014.