Old German Shepherd Dog (German: Altdeutscher Schäferhund) is a controversial name for the long-haired variation of the German Shepherd Dog (German: Langstockhaariger Deutscher Schäferhund), which is not a separate breed recognized by the Fédération Cynologique Internationale. Nonetheless, there are efforts to establish this variety as a separate breed. 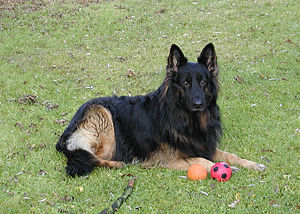 Most of them appear similar to the long-haired variation of the modern German Shepherd, although with slightly different colouring patterns. The coat may be any length and can be shaggy, smooth or wiry. The colours may be black, brown, grey or tan. They are generally the same height as a typical German Shepherd: 55 and 65 centimetres (22 and 26 in) at the withers. They weigh between 22 and 40 kilograms (49 and 88 lb) but can be larger.[3]

Other articles of the topic Animals : Toledo Safari Park

Other articles of the topic Germany : Wolfgang Martin Schede, Barbara Grobien, Michael Gläser, Birgit Dahlenburg, Amin Farden, Juwelo, Hilpertsau-Weisenbach compact overhead line
Some use of "" in your query was not closed by a matching "".

Retrieved from "https://en.everybodywiki.com/index.php?title=Old_German_Shepherd_Dog&oldid=940233"
Categories:
Hidden categories:
This page was last edited on 10 August 2020, at 09:47.
This page has been accessed 309 times.
Content is available under License CC BY-SA 3.0 unless otherwise noted.
Privacy policy
About EverybodyWiki Bios & Wiki
Disclaimers