The Orthodoxy Cognate PAGE (OCP) is a society for the promotion of Orthodox Christian unity and faith established under the Travancore-Cochin Literary, Scientific and Charitable Societies Registration Act of 1955.[1] Formerly known as Orthodoxy Beyond Limits, the society's name changed in 2010 and it was registered in July of that year. 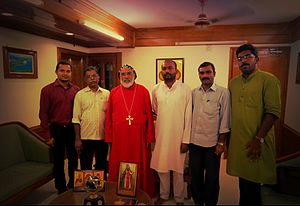 OCP began as 'Orthodoxy Beyond Limits' in June 2007. Inspired by Kyriakose Thottupuram of Chicago, George Alexander, Subin Varghese and Boaz John formed the OBL forum. The forum website was inaugurated by Mor Gregorious Gabriel of Trivandrum and Chorbishop Kyriakose Thottupuram in July 2007 in Chicago.[3]

In October 2018, the Center for Orthodox Studies (COS) was launched. COS is an organ under the Dept. of Church Research and Studies of Orthodoxy Cognate PAGE. COS is the apex body for various OCP projects like MARP, OCEI, and OOCP. Fr. Dr. Jossi Jacob (Faculty – Holy Trinity University, Ethiopia) is the Head and Chief of COS.

The OCP Society is registered as an NGO under the Travancore-Cochin Literary, Scientific and Charitable Societies Registration Act, 1955. An executive council is elected from the general body every three years. The council consists of a chancellor, chairman, vice-chairman, secretary, treasurer, and five elected members. The Executive Council is followed by OCP Foundation, Delegate Council, OCP Secretariat, OCP Departments, and External Observatory Council.

Research and studies on the society[edit]

A presentation and lecture on the pan-orthodox activities of OCP was held at the ]]Westphalian Wilhelm University Münster]] on 19 September 2014. The Conference was part of the inter-university study program on "Christianity in Asia" European Summer School – Intensive Study Program. The lecture was given by Ms Maria Sidiropoulou (M. Th. Student – Aristotle University of Thessaloniki. OCP thus became one of the first ever Pan-Orthodox organization to be researched and studied at academic universities.[citation needed]

Retrieved from "https://en.everybodywiki.com/index.php?title=Orthodoxy_Cognate_PAGE_Society&oldid=941089"
Categories:
Hidden categories:
This page was last edited on 10 August 2020, at 13:17.
This page has been accessed 223 times.
Content is available under License CC BY-SA 3.0 unless otherwise noted.
Privacy policy
About EverybodyWiki Bios & Wiki
Disclaimers
Dark mode