Neil was born in Epsom (England) to a Spanish mother and an English father. He was then raised in Spain, France and Belgium. He graduated from Mons University (Belgium) with two Masters degrees in Translation and Interpretation (in English, French and Spanish). His artistic and musical skills (singing, songwriting, guitar, bass, beatboxing, art and slam poetry) have been self-taught. He is currently living in Seville (Spain).

Outtaseezun began his career as a poet and musician by participating in Open Mic nights and small performances in Belgium between 2003 and 2008.

In 2004, he participated in the 7th edition of the Poetry Festival of Namur (Belgium).[1]

In 2010, he released his first album “Introducing the Raggedy Zirkus”[15] [16] [17] [18] [19] [20] with singer-songwriter Cindya Izzarelli. It was released with the Belgian label Earphones Productions and recorded at MicroNation studio (Anderlecht, Belgium). He contributed to this album as author, composer, arranger, guitarist, bassist, beatboxer, singer and backing vocalist. They performed their album in small Belgian venues such as Piola Libri (Brussels), La Livre de Café and La Maison Folie (Mons). They were also featured on the Belgian television Network TéléMB in November 2010. [21] Also in 2010, he performed as a slam poet in the spoken-word and music show “Smoke & Mirrors” with which he toured Europe (Germany, Italy, Spain, Netherlands and Romania). [22] [23] [24] [25] [26] [27] [28] In August 2010, he performed as a slam poet at the Sziget Festival (Hungary), one of the largest music and cultural festivals in Europe. He participated as part of the EU Trio Slam performance on their Octopus Multi-Arts site. [29] 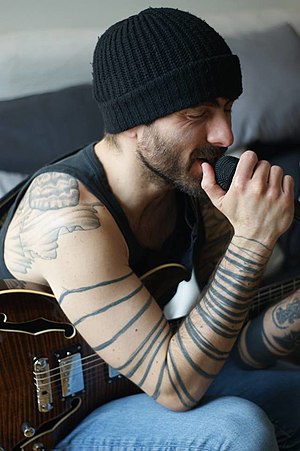 In 2011, he performed as author, composer, arranger, guitarist, bassist, beatboxer, singer, slam poet and backing vocalist in the spoken-word and music show “Haïti, entre images et mots” with which he performed in Port au Prince (Haiti) and Mons (Belgium).[30] [31] [32] Also in 2011, he worked as Artistic director and performed as bassist for the “Slam BUILDING” show at the Maison Folie in Mons (Belgium). [33] In July 2011, he was invited to host slam poetry workshops at the AKDT in Libramont (Belgium).[34] In November and December 2011, he published two poetry and artwork books. [35] [36]

In 2015, he auditioned to become a “Musicien du Métro” in Paris (France) and started daily busking in the underground Métro stations. He participated in an audio documentary by Remi Le Beguec.[37] It was created to be presented at the 2016 Festival Longueur d'Onde in Brest (France). He also participated in a "Musiciens du Métro" documentary by Kristen Le Floch, Corto Melcer and Salomé Pereira. [38]

In 2016, he released his second album “Cityzens Were Here” [39] [40] [41] with singer-songwriter Meen, recorded at MicroNation studio (Anderlecht, Belgium). He contributed to this album as author, composer, arranger, guitarist, bassist, beatboxer, singer and backing vocalist. The song “Paris” from the album was used in an advert for Elema clothing, aired in Belarus and created by filmmaker Andrey Levkovich. [42] The song “Be Yourself” from the album was used by JETAA International [43] as well as in a short film by Susanne Minke "Haltestelle zukunft - das mehrgenerationen-quartier - Am Albgrün in Karlsruhe - Trailer: Einblicke und Momentaufnahmen". [44] The song “Daddy” from the album was played on Radio EZ in the USA.

In 2017, he contributed as session bassist to French artist Laure Lucas's first EP “Love Letters & Apologies” which was released independently in March 2017. [45] He performed as guitarist and backing vocalist alongside French singer Anne Issermann in several live shows in Parisian bars and small venues. [46] He wrote, composed and arranged two songs for Ossetian artist Zarifa's upcoming album. [47] He composed and arranged four songs for artist Amadeus' upcoming album. [48] He performed as bassist alongside singer-songwriter Raïth Mrad [49] in several live shows in small Parisian concert venues. Outtaseezun also wrote and composed one of Mrad's songs, as well as creating the bass lines on all of his other existing songs.

In 2018, he performed as slam poet in the Belgian-Senegalese show “Ibeu Lo” during its international tour (France, Belgium and Senegal). [50] [51] [52] [53] In December 2018, he recorded guitar and bass for a song by Italian DJ A2SO and rapper YAZID for the label Vedanity Affair which was released in May 2019. [54] He also began to record songs with French producer and sound engineer Yoann Demtchouk which will be released through his label 31 Burgundy.

In 2019, he began a collaboration with Spanish artist Laura Alvarez and American artist Adam Cooper with whom he is preparing new albums and performing live concerts in Seville (Spain). In March 2019, he began to release solo single tracks on which he performs as author, composer, arranger, singer, bassist, beatboxer, backing vocalist and mixer. He released “Trial & Error” in March 2019, “Hydras” and “Where did we go wrong” in April 2019, “U got the power” and “Treat someone right” in May 2019.[55]

Retrieved from "https://en.everybodywiki.com/index.php?title=Outtaseezun&oldid=941335"
Categories:
Hidden category:
This page was last edited on 10 August 2020, at 15:01.
This page has been accessed 427 times.
Content is available under License CC BY-SA 3.0 unless otherwise noted.
Privacy policy
About EverybodyWiki Bios & Wiki
Disclaimers