PAIRS Foundation owns copyright to marriage and relationship education programs that are taught by instructors worldwide who are trained, certified and licensed by the foundation[2] and to the trademark, "skills for successful relationships".

PAIRS Foundation's mission is to "teach those attitudes, emotional understandings, and behaviors that nurture and sustain healthy relationships and to make this knowledge broadly available on behalf of a safer, saner, more loving world."[3]

The PAIRS 120-hour semester course was developed in 1975 by marriage and family therapist Lori Heyman Gordon as a graduate program for counseling students at American University in Washington, D.C.; it was one of the first comprehensive educational programs in the United States that sought to reduce marriage and family breakdown through Relationship Education.[4] The course integrated and work by Virginia Satir, Daniel Casriel, Murray Bowen, James Framo, George Bach, Gordon and others.[5]

Between 1992 and 1997, Carlos Durana, Ph.D., conducted early studies on the impact of the program, many of which were published in industry journals. During that period, articles about the program appeared in Newsweek, Time, Cosmopolitan, Ladies Home Journal and Psychology Today Gordon was also featured in interviews on CNN, NBC's Today Show, Geraldo, The Gordon Elliot Show, and CBN.[6]

The foundation began piloting intensive couples seminars, ranging from one to four days, in the late nineties. A December 1998 New Woman magazine cover story featured the first-person account of Molly and Chris Hanson.[7]

On May 9, 2000, the foundation's CEO Seth Eisenberg was a guest on ABC's Politically Incorrect with Bill Maher to discuss Florida's Marriage Preparation and Preservation Act, mandating relationship skills training in high schools and for couples applying for marriage licenses. O .[8]

In 2002, Gordon was recognized with the Impact Award of the Coalition for Marriage, Family and Couples Education:[9]

PAIRS was awarded a $5 million federal grant in 2006 by the United States Department of Health and Human Services, Administration for Children and Families, to provide classes and conduct a five-year evaluation of the program's impact among English, Spanish and French/Creole-speaking couples and singles in Florida's Miami-Dade, Broward and Palm Beach counties.[10]

In November 2010, PAIRS was featured in a Time magazine cover story by Belinda Luscombe, "Who Needs Marriage?"[11] Another Time Magazine story that month featured a PAIRS iPhone App and questioned, "Can an iPhone App Save Your Marriage?"[12]

In October 2012, the United States Department of Veterans Affairs Veterans Health Administration featured PAIRS in an article about helping Veterans strengthen "their most significant relationships":

The Department of Veterans Affairs is trying a new path to caring for and healing the nation's wounded Veterans. Now, in addition to repairing their damaged bodies and minds, VA is going one step further and helping to repair their crumbling intimate relationships.[13]

Also in October 2012, PAIRS Foundation's collaboration with the San Diego VA Healthcare System was recognized with the "Spirit of Planetree Award" for the program's impact strengthening relationships between "family, friends and social supports as a central component of patient-centered care."[14][15]

The Department of Veterans Affairs Office of Patient Centered Care and Cultural Transformation produced a video in May 2014 promoting the Warrior to Soul Mate program, supported by the PAIRS curriculum, as a valuable component of VA's efforts to promote health and wellness.[17] 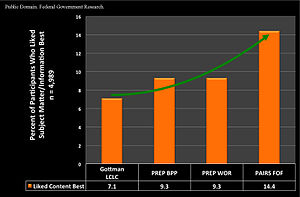 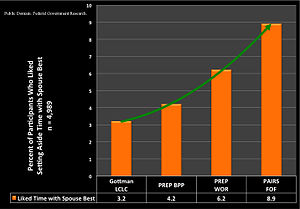 Retrieved from "https://en.everybodywiki.com/index.php?title=PAIRS_Foundation&oldid=1067176"
Categories:
Hidden categories:
This page was last edited on 22 October 2020, at 03:53.
This page has been accessed 37 times.
Content is available under License CC BY-SA 3.0 unless otherwise noted.
Privacy policy
About EverybodyWiki Bios & Wiki
Disclaimers
Mobile view