Pale Moon is an open-source web browser with an emphasis on customizability; its motto is "Your browser, Your way".[7] There are official releases for Microsoft Windows and Linux,[7] as well as contributed builds for various platforms.[3]

Pale Moon originated as a fork of Firefox, but has subsequently diverged. The main differences are the user interface, add-on support, and running in single-process mode. Pale Moon retains the highly customizable user interface of the Firefox version 4–28 era.[8] It also continues to support some types of add-ons and plugins that are no longer supported by Firefox,[9][10] including NPAPI plugins such as Flash Player.[11][12] 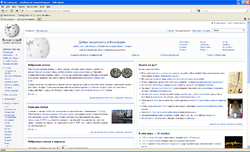 Pale Moon has diverged from Firefox in a number of ways:

The end of XP support was quickly followed by Pale Moon getting at least two forks of its own, both of which take the most recent Pale Moon code and recompile it for XP; New Moon by roytam1, and Mypal by Feodor2.[20]

The final version for Snow Leopard is the foundation for the Arctic Fox web browser.[21]

The official releases do not support older processors without the SSE2 instruction set.[4] However, a contributed build for Linux is available that supports some older processors.[22]

Pale Moon's source code is released under the Mozilla Public License 2.0 except for parts relating to branding. To ensure quality, redistribution of officially branded Pale Moon binaries is only permissible under specific circumstances.[6] The name and logo are trademarked by the project founder and cannot be used without his prior permission.[23]

M.C. Straver is the project founder and lead developer.[1] Straver's first official release of Pale Moon, in 2009, was a rebuild of Firefox 3.5.2 with tweaked compiler settings.[jargon][24] Eventually the scope of the project grew, and version 24 became a true fork of Firefox 24 ESR.[24] Starting with version 25, Pale Moon uses a completely independent versioning scheme.[25]

In 2017, the team behind Pale Moon began the Unified XUL Platform (UXP) project.[28] UXP is an actively maintained fork with a historical fork point of the Mozilla code at Firefox 52 ESR[29] with significant modifications to be a codebase for updated web technology support and creating any number of XUL-based applications.[jargon][clarification needed][30][31] To demonstrate, develop and refine the platform, Straver used it to create a new browser, Basilisk.[32][33]

Pale Moon for Android was a distinct development effort that is no longer maintained.[35] First released in 2014,[36] Straver announced the following year that it would likely be abandoned due to lack of community involvement.[37] The final release was 25.9.6.[38]

On 10 March 2021 all Apple Macintosh support was dropped due to lack of consistency from community developers for the Mac platform.[40] And as a result of the dropped support, on 31 March 2021 Brian Smith released a fork for macOS called White Star.[41]

In 2013, Pale Moon was a bit slower than Firefox in the ClubCompy Real-World Benchmark, with the browsers respectively scoring 8,168 and 9,344 points out of a possible 50,000.[42] In a 2016 browser comparison test by Ghacks, Pale Moon version 25 had the smallest memory footprint after opening 10 different websites in separate tabs.[43] However, in the same report Pale Moon scored bottom in the Mozilla Kraken, Google Octane, 32-bit RoboHornet tests and second-to-last in the 64-bit RoboHornet benchmarks. Whilst other browsers hung during some tests, Pale Moon only hung during the JetStream JavaScript benchmark.[43]

Current (UXP) versions of Pale Moon score comparatively to other browsers in benchmarks, showing, for example, no significant difference on the Sunspider benchmark compared to Firefox Quantum.[44]

Straver has remarked that the role of benchmark tests is questionable, stating that they "can't be used to draw hard (or regularly even any) conclusions. Plain and simple: they are an indication, nothing more. They serve well if you compare closely related siblings (e.g. Firefox and Iceweasel) or different builds of the exact same browser, to get a relative performance difference between the two on the limited subset of what is actually tested, but that's about as far as it goes."[45]

The questionable role of benchmarking was later confirmed by leading technology experts[46][47] when, for example, Google announced it was retiring its Octane benchmark in 2017,[48] and Mozilla indicating that they "believe these benchmarks are not representative of modern JS code" when introducing WarpBuilder in November 2020, admitting that their new technology "is currently slower than Ion on certain synthetic JS benchmarks such as Octane and Kraken".[49]

It was reported on 10 July 2019 that a data breach of the archive server holding previous binaries of the Pale Moon browser had occurred and malware inserted into the executables. This breach was discovered on the previous day. It is unknown when the breach first occurred. At first, it was estimated to have been as early as 27 December 2017, according to timestamps. After getting some more feedback from users, it is now estimated to have occurred somewhere between April and June 2019.[51]

Share
Retrieved from "https://en.everybodywiki.com/index.php?title=Pale_Moon_(web_browser)&oldid=1984170"
Categories:
Hidden categories:
This page was last edited on 31 August 2021, at 17:41.
Content is available under License CC BY-SA 3.0 unless otherwise noted.
This page has been accessed 740 times.
Privacy policy
About EverybodyWiki Bios & Wiki
Disclaimers