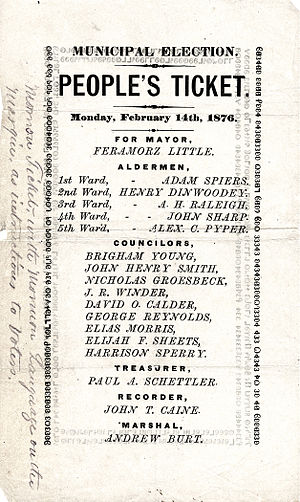 Schettler was born near the city of Koblenz, Prussia. He emigrated to the United States in 1858, settling in New York City. He was baptized into The Church of Jesus Christ of Latter-day Saints (LDS Church) in that city on February 9, 1860. The baptism was performed by George Q. Cannon.

Schettler moved to Utah Territory in 1860. In 1861, he was called to serve as mission president in the Netherlands. After a short time there he was reassigned to Switzerland, where he served as a missionary until 1864.

Schettler then returned to Utah where he worked as a treasurer. He served as the treasurer and interpreter for George A. Smith's delegation that went to Palestine in 1872 and 1873.

Schettler died of a stroke in Salt Lake City in 1884.

Retrieved from "https://en.everybodywiki.com/index.php?title=Paul_Schettler&oldid=943306"
Categories:
This page was last edited on 11 August 2020, at 05:57.
This page has been accessed 204 times.
Content is available under License CC BY-SA 3.0 unless otherwise noted.
Privacy policy
About EverybodyWiki Bios & Wiki
Disclaimers