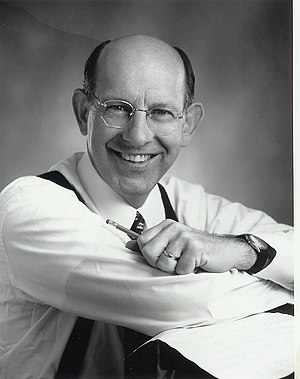 Michael Finlinson Moody (born 1941) is a composer of hymns and children's songs. He was the chairman of the General Music Committee of The Church of Jesus Christ of Latter-day Saints (LDS Church) from 1977 to 2005.[1][2][3]

Moody was born in Payson, Utah, and grew up in Spanish Fork, Utah. As a young man he served as a Mormon missionary in the French East Mission.[4] Moody's wife, Maria Ann Toronto, is the great-granddaughter of Joseph Toronto.

Moody received a doctorate in church music from the University of Southern California.

Moody served as the executive secretary of the General Church Music Committee under coordinator Robert M. Cundick. This was a subdivision of the Church Music Department under the direction of O. Leslie Stone.[5] Moody became the chairman of the General Church Music Committee in 1977.[6] He served as chairman of the Hymnbook Executive Committee for the church’s current hymnal, published in 1985. At the time of his retirement, the church had hymnbooks of varying sizes published in 98 languages.[7]

Moody has written the music to a number of songs. A number of his compositions came through a tradition of sending out Christmas songs in lieu of Christmas cards because he was "a frugal zealot".[8] Moody frequently relied on Mabel Jones Gabbott and Penny Moody Allen for lyrics.[9] Some of Moody's songs are included in the 1985 hymnal and Children's Songbook, while other songs have been published in various outlets and recorded by many artists, including the Mormon Tabernacle Choir.

In 1990, Moody was called to serve as president of the church's Woods Cross Utah East Stake.[10] Moody had previously served as bishop of the Woods Cross 3rd Ward.[6]

He filled a volunteer service assignment, with his wife, in Jerusalem as organist at the Brigham Young University Center for Near Eastern Studies from 2005 to 2007.

In 2009, Moody was called to serve as president of the Papeete Tahiti Temple.[12] In 2013, Moody and his wife were serving as LDS missionaries in Gabon.[13]

A complete list of Moody's compositions (including free sheet music and audio downloads) can be found at moodymusic.org.

Retrieved from "https://en.everybodywiki.com/index.php?title=Michael_F._Moody&oldid=932571"
Categories:
Hidden categories:
This page was last edited on 8 August 2020, at 10:40.
This page has been accessed 523 times.
Content is available under License CC BY-SA 3.0 unless otherwise noted.
Privacy policy
About EverybodyWiki Bios & Wiki
Disclaimers
Mobile view