Pavel Gregorić (pronounced [paʋel ɡrěɡoritɕ]; written Gregoric in English; born 3 April 1972) is a Croatian philosopher, classical scholar, and author. He is an associate professor at the Department of Philosophy of University Centre for Croatian Studies, University of Zagreb. 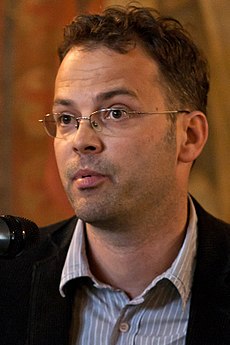 Gregorić first attended Faculty of Humanities and Social Sciences of the University of Zagreb, where he received his Bachelor of Arts in philosophy and comparative literature in 1996. The same year he matriculated at Merton College, Oxford, receiving his Master of Arts and Doctor of Philosophy in Philosophy in 2003.[1]

Gregorić's dissertation in the field of ancient philosophy and ideas, titled Aristotle on the Common Sense, won him the 2004 Conington Prize awarded by the University of Oxford along with a £1,000 reward.[2][3] In 2008 he won the Annual Award of the Faculty of Humanities and Social Sciences (Godišnja nagrada Filozofskog fakulteta).[1]

Gregorić is an outspoken atheist, claiming that he "never had a religious phase in [his] life and never had the need to flirt with faith." From an early age, his parents fostered his interest in science, arts and secularism and, although they were members of the Communist Party of Croatia, he says he does not "remember any kind of ideological indoctrination in the house." He declared himself an atheist as a high school student when he got acquainted with the meaning of the word "atheism."[4]

In an interview for Jutarnji list in 2010, Gregorić expressed his concerns about the status of atheists in Croatia, asserting that "it is undesirable to be an atheist in a country where religious groups are financed from the state budget and not from the donations of the followers."[5] He criticized the policy of the government to continue to implement the Roman Catholic religious education in schools, despite the fact that Constitution of Croatia is based on secularism and requires separation of church and state, adding that "what is taught in catechism is largely contrary to what is taught in history, geography and biology, and the method of teaching in catechism is in its very nature opposite to the way other subjects should be taught, encouraging students to question and think independently." He also pointed out that the Croatian educational system provided no suitable alternative for the parents who were wishing to spare their child of religious indoctrination in public schools.[4][6]

Gregorić frequently publishes posts on atheism, philosophy of religion, and criticism of religion on his Croatian blog Blogomdan.[7][third-party source needed]

Share
Retrieved from "https://en.everybodywiki.com/index.php?title=Pavel_Gregorić&oldid=943376"
Categories:
Hidden categories:
This page was last edited on 11 August 2020, at 06:19.
Content is available under License CC BY-SA 3.0 unless otherwise noted.
This page has been accessed 808 times.
Privacy policy
About EverybodyWiki Bios & Wiki
Disclaimers